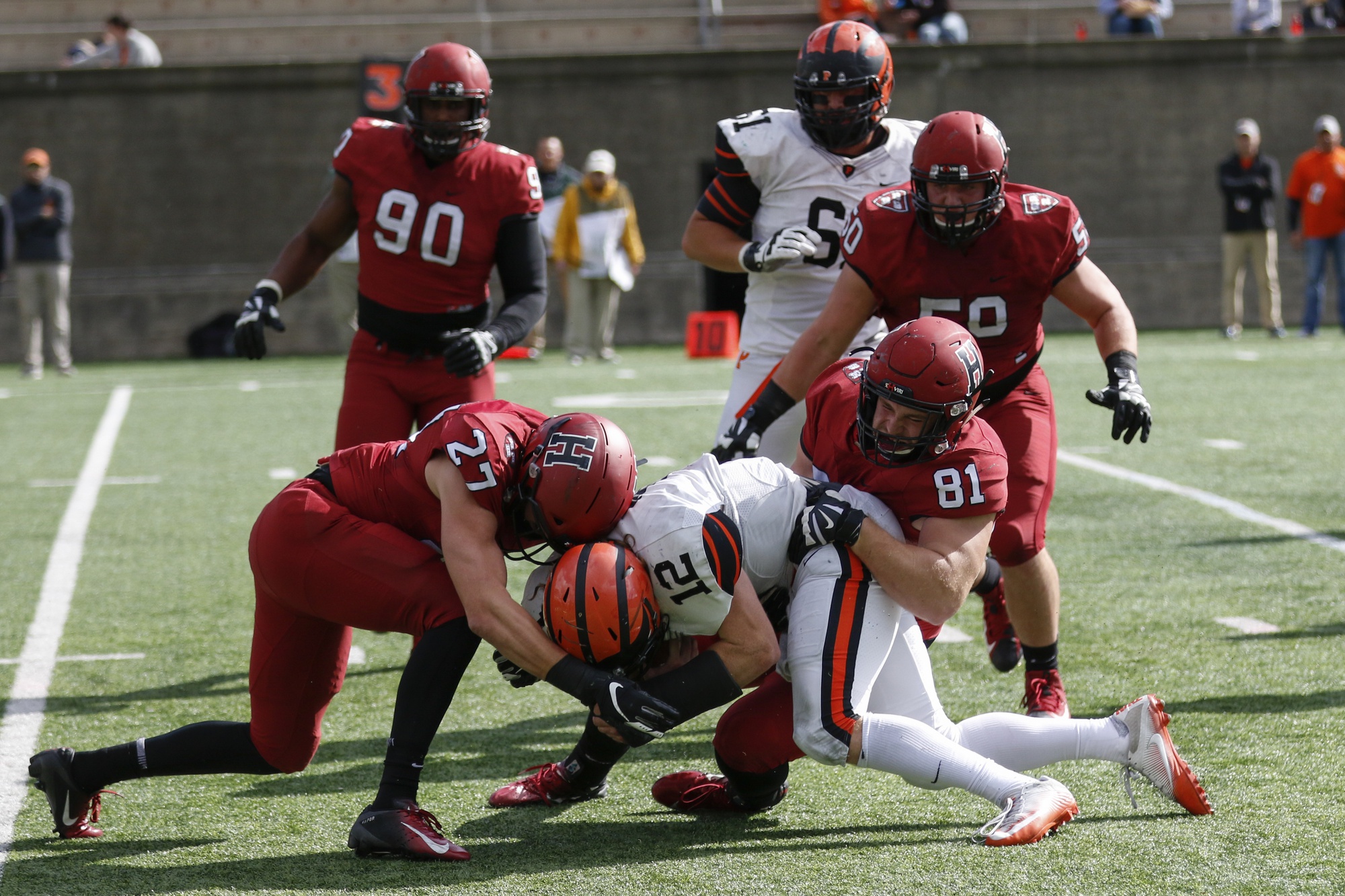 The Crimson's defense limited a potent Princeton attack on Saturday, holding the Tigers to just 29 points compared to their prior season average of 52. By Timothy R. O'Meara
By Cade Palmer, Crimson Staff Writer

As boats rowed down the nearby Charles River during the annual Head of the Charles Regatta, so, too, did the hopes of an Ivy League championship float away for the Harvard football team on Saturday.

With the Crimson challenging one of the two undefeated division teams, No. 18/23 Princeton, Harvard’s defense nearly carried it through in the 29-21 loss. Taking place at Harvard Stadium, the 111th rendition of this rivalry served as the first game in Harvard’s upcoming all-Ivy slate for the remainder of the season.

In its five matchups prior to Harvard, Princeton averaged 52 points on offense. Saturday, the team put up just 29.

In its five matchups prior to Harvard, Princeton never won by fewer than 35 points. Saturday, the team won by eight.

In its five matchups prior to Harvard, Princeton’s lowest halftime score was 28. On Saturday, the team finished the first half with 10.

In every conceivable metric, Princeton’s offense was shuttered in the midday tilt. The powerhouse offense that had yet to score fewer than 45 points — despite losing starting quarterback John Lovett to injury against Brown — never led Harvard by more than two possessions.

“We haven’t played in the fourth quarter and that was the next obstacle and a barrier we had to come through on,” Princeton coach Bob Surace said. “Credit Harvard. They played their tails off. It was a great game, it’s typical college football game with two really good teams going back and forth and we were very fortunate to come up with a few more plays.”

Even then, Harvard’s defense put up a goose egg in the opening 15 minutes of the half, a streak which likewise saw no Harvard tallies.

Lovett saw his worst performance of the season calling plays from behind the center. The quarterback tallied a season-low passing percentage (48.4), amount of touchdown throws (one), and sum of rushing yards (45). He tied for a season-low in rushing touchdowns (one), too.

In the defensive effort for Harvard, sophomore linebacker Jordan Hill tallied a season-best 11 tackles. Senior defensive tackle Stone Hart punched his way through the line for 2.5 tackles for loss.

“I don’t know how many tackles [Hill] had but it seemed like he was at least in double digits,” Surace said. “Hill was all over the field and he is so athletic for a big guy it made it really hard.”

Harvard entered the match with the best third-down defense in the Ivy League and the ninth best in the nation. Princeton arrived at Harvard Stadium ranked first in the conference and third in the nation in third-down offense.

It was clear that Princeton’s effectiveness on third-down would foretell the squad’s match-long success. Princeton’s .553 conversion percentage tumbled in the 60 minutes against Harvard.

“We talked about situational football during the week, that third downs and redzone were going to play huge factors in this game,” Surace said. “They make you earn everything. They have a terrific pass rush, they’re athletic.”

The visiting squad converted five attempts on 18 tries, good for a .278 conversion rate.

“Coach [Scott] Larkee came up with a great plan and he really simplified [theirs], that made it easy for Stone [Hart] and I to make plays,” said senior defensive tackle Richie Ryan. “Stone was playing lights out. I’m really proud of the defensive line, linebackers, everyone.”

The third-down defense did not carry over into the fourth. The visitors converted a perfect three-for-three on fourth downs to continue a two-game streak of perfection on make-or-break tries.

With winds as high as 17 miles per hour on Saturday, the weather added another dimension of trickiness to converting through the air. In fact, Surace attributed his sub-standard play to the wind — in addition to the defensive line.

“It was a tough day wind-wise as well,” Surace said. “I think both quarterbacks struggled a little bit with accuracy and not only accuracy but I think both D-lines got pressure. I think it was a tough day to be out there because you didn’t have a lot of time, and when you were throwing it until the very end there was a really stiff wind.”

Harvard senior quarterback Tom Stewart completed 19 of 35 attempts. The effort was good enough for two touchdowns and 223 yards through the air.

Harvard coach Tim Murphy didn’t think the wind played as much of a role as Surace did.

“We’re used to the wind, it’s kind of a constant,” Murphy said. “The 15-mile an hour thing, swirling wind in Harvard Stadium, that’s all we know this time of year so I don’t think it was that big of a factor.”