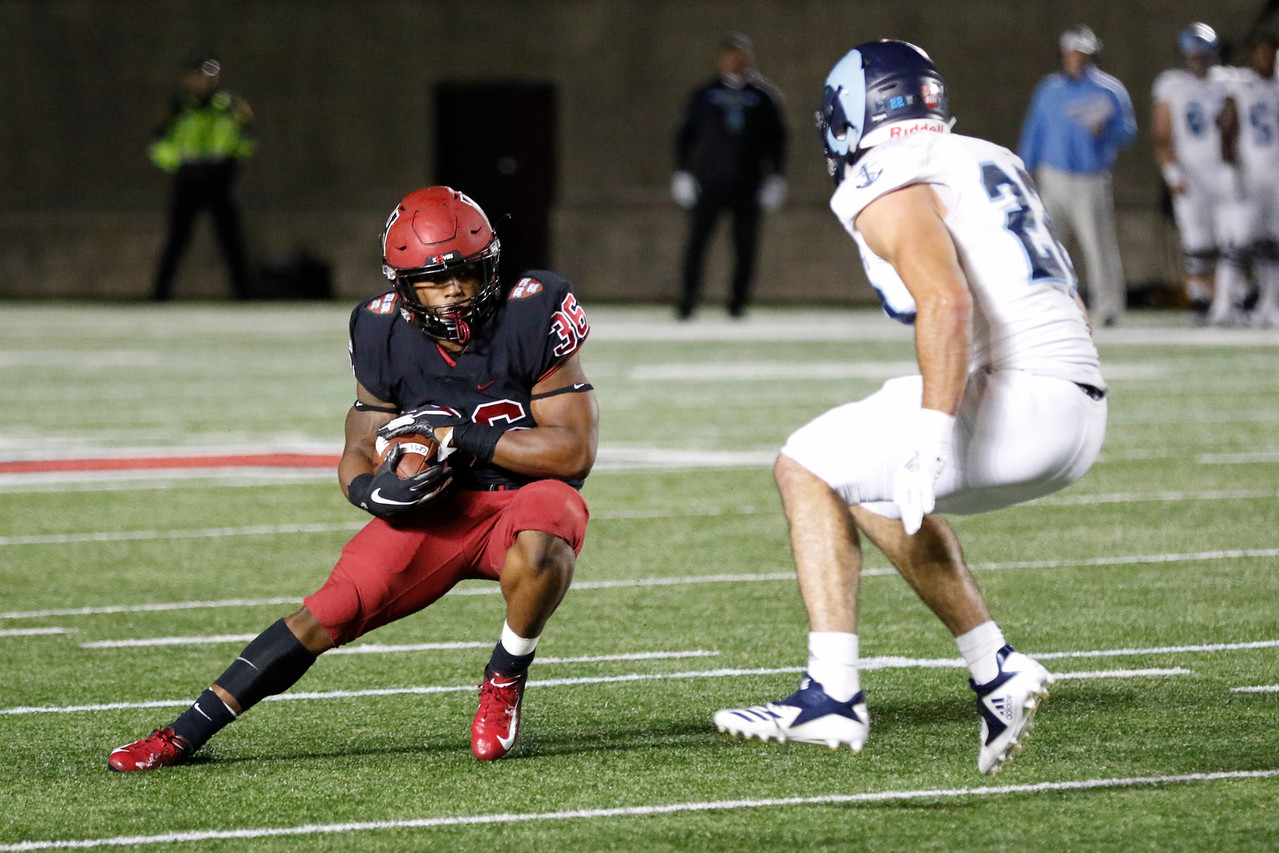 At the outset of the 2018 football season, Harvard coach Tim Murphy was struck by the level of competitiveness his team would face from outside its own conference. In a year in which both parity and skill was expected within the Ivy League, the Crimson would also have to deal with three teams — San Diego, Rhode Island, and Holy Cross — which could all roll into Harvard Stadium and emerge with a victory.

Over the duration of the current senior class’ time in Cambridge, the Crimson boasts an 8-3 record against non-league competition, and two of those losses have come at the hands (or hooves) of the Rams. Currently ranked 17th and 18th in the AFCA and STATS polls, respectively, Rhode Island (3-1, 2-0 CAA) put together a complete victory for its second consecutive win over Harvard.

“We knew they were an outstanding football team,” Murphy said. “They just made more plays than we did. We’ve...got to make more plays on offense to beat a really, really good scholarship football team.”

As it had to contend with a ranked team for the first time all season, the Crimson (2-1, 1-0 Ivy) showed many more signs of weakness than it had against either San Diego or Brown. Harvard managed to coast to victories over both of these programs on the strength of dominant play early in the games. This time, however, the Crimson had to play catch up, and its deficiencies were magnified in a situation with a razor-thin margin of error. Harvard’s shortcomings took the form of both offensive stagnation and a handful of mental lapses or physical mistakes.

In the first quarter, the Crimson defense set the tone that it would maintain for much of the rest of the game, save for an electric second-quarter performance by quarterback JaJuan Lawson that netted the Rams 14 points. However, Rhode Island managed to avoid an opening-period shutout on a Harvard punt attempt.

After a sack brought quarterback Jake Smith down for a loss of seven, the Crimson was set to punt from its own five. The snap came in slightly inaccurate to freshman Jon Sot, who bobbled the ball and had to rush a kick. His effort bounced off a lineman’s back and bounded out the back of the end zone to give the Rams their first lead of the game, 2-0.

In the third quarter, during a stretch in which the defense was having its way with Rhode Island sophomore backup signal caller Vito Priore, Harvard allowed the Rams to add to their 16-6 lead, again on special teams. This time, after the Crimson’s Jake McIntyre hit his second of three field goals, Rhode Island’s Ahmere Dorsey fielded the kickoff at his own three and jetted 97 yards for a return touchdown.

Finally, with 3:34 left in a back-and-forth final quarter that featured five consecutive punts, Harvard had the ball with a chance to tie the game at 23 apiece. On second down, however, Smith tossed the ball directly into the waiting hands of Rams safety D.J. Stewart. Priore threw a pick of his own on a play on which senior defensive back Wes Ogsbury made a fully-outstretched leaping grab, but Smith returned the favor during his next series, again on the second snap. In all, Smith now has four interceptions through three games.

The week before Rhode Island visited Cambridge, it traveled to the University of Connecticut and nearly defeated the host FBS program in an offensive shootout. Despite the fact that the 56-49 ballgame ended in a loss for the visitors, the Rams must have been feeling confident in their offense re-entering FCS play.

However, when the dust settled at Harvard Stadium this past Friday night, Rhode Island had scored less than half of the points it had the previous weekend. Despite the Crimson’s offensive struggles, one could argue that the Crimson limited the Rams’ offense more so than the other way around. Harvard recorded more first downs, rushing yards, and total yards. The teams tied in the turnover battle, and the Crimson tallied one more sack and one more tackle for a loss. As outlined above, Rhode Island’s nine special teams points proved to be a deciding factor.

“They played really hard, they played really well, they did a little better coaching job than I did, and the combination of those things made it a very tough, hard-fought game,” Murphy said. “There were two outstanding defenses out there. I thought our defense played heroically. Just got to make more plays offensively.”

In the second half, the Harvard defense conceded just seven points and 20 total yards on 21 snaps. Dorsey’s kick return represented the lone time the Rams even came close to scoring in the final 30 minutes; otherwise, the farthest Rhode Island advanced was to the Crimson’s 28, and the Rams did not cross into Harvard territory on offense during the third quarter. This sustained stellar defensive effort allowed the Crimson to stay within striking distance and have a chance to tie the game

An important factor in Rhode Island’s lackluster scoring was losing Lawson in the second quarter. Lawson was 12-for-16 for 153 yards and two touchdowns, one passing and one rushing. The touchdown he took in himself caused his removal from the game, as he suffered a leg injury colliding with a Harvard defender at the goal line. Rams coach Jim Fleming indicated that Lawson could have re-entered the game if absolutely necessary, but Priore took command of the offense for the remainder of the game.

LOSING THE BATTLE, WINNING THE WAR

Rhode Island now has a two-year winning streak against the Crimson, but that streak will not grow in the near future. The two programs were booked for a four-game series which started in 2015, and Harvard took the first two matchups before falling in the most recent two. However, the Crimson also prevailed in the first-ever meeting between the two schools. In 1923, Harvard shut out Rhode Island, 35-0, at home, making the all-time series 3-2 in favor of the Crimson.

“When I first came and took this job and I saw we had Harvard on the schedule for four straight years, I wanted to punch somebody because they’re a very good football team,” Fleming said.

Discounting that 20th century matchup, the two teams have split their head-to-head games roughly according to the general success of their respective programs. In 2015 and 2016, Harvard put together a 16-4 overall record and won the Ivy League in 2015. The team went through a rough patch last year and is currently in the middle of what some would call a rebuilding phase. The Rams, on the other hand, are a team on the rise, and their wins over the Crimson in 2017 and 2018 demonstrate the now-dominant nature of their squad. For context, in 2015 and 2016 Rhode Island won just three of its 22 contests.