'It's Not Resistance, It's Reporting': Jill Abramson and Jane Mayer Talk Partisanship and the Press 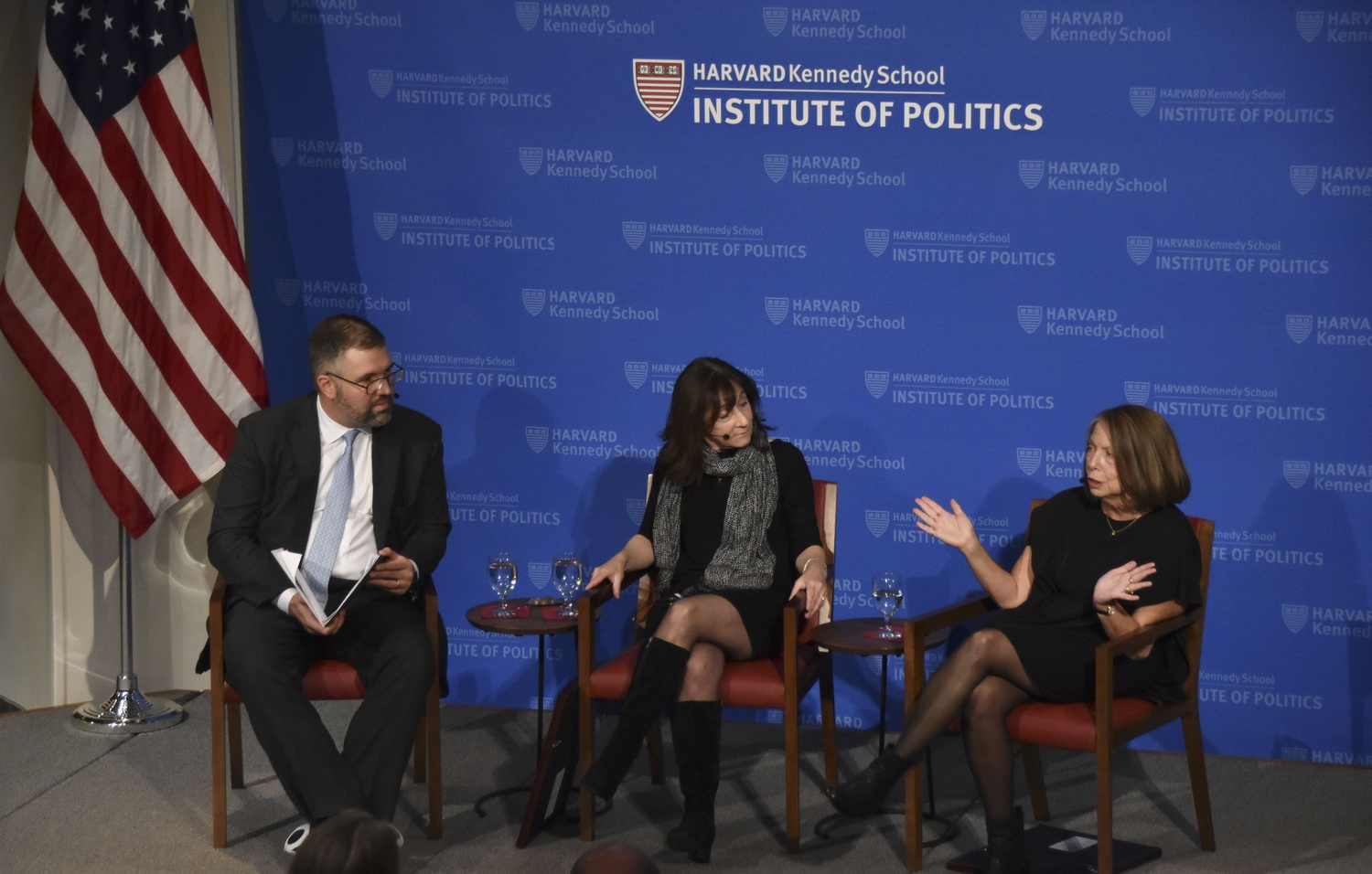 Former executive editor of The New York Times Jill E. Abramson speaks about the impact of the press on the political world during a forum event with Jane M. Mayer and David J. Von Drehle. By Quinn G. Perini
By Ellen M. Burstein and Jania J. Tumey, Crimson Staff Writers

Former executive editor of the New York Times Jill E. Abramson ’76 and New Yorker investigative journalist Jane M. Mayer discussed the intersection of politics and press in an era of partisan discord at the Institute of Politics Tuesday.

In a conversation with Nicco Mele — the director of the Harvard Kennedy School’s Shorenstein Center on Media, Politics, and Public Policy — Abramson and Mayer reflected on their recently published essay, “The Press Has Never Been More Vital to the Success of Democracy,” as well as on their decades of experience covering both the executive branch and sexual harassment at the highest levels of the American government.

In recent weeks, Mayer has played a critical role in reporting the sexual assault allegations against Supreme Court Justice Brett M. Kavanaugh, which emerged shortly before his confirmation. She and fellow New Yorker writer Ronan Farrow reported the existence of a letter from one of Kavanaugh’s high school classmates — later revealed to be Christine Blasey Ford — that detailed an allegation of sexual assault at a high school party. Mayer and Farrow later reported on similar sexual misconduct allegations brought by Deborah Ramirez, one of Kavanaugh’s classmates at Yale.

Covering sexual misconduct amongst members of the judiciary is familiar territory for both Mayer and Abramson, who currently teaches creative writing courses on journalism in the English Department. In 1994, the pair published “Strange Justice: the Selling of Clarence Thomas,” an in-depth account of the sexual harassment allegations raised against Supreme Court Justice Clarence Thomas by Anita Hill during his confirmation hearings.

Abramson noted that there were strong parallels between the Thomas and Kavanaugh confirmation processes.

“To say it is a flashback is an understatement,” she said.

She remarked that the Senate Judiciary Committee’s decision to only have Kavanaugh and Ford testify, rather than call other witnesses, indicated to her that Ford’s allegations would be handled similarly to Hill’s.

“The strategy was to isolate a lone female accuser, to have her testify first, as Anita Hill did, and have the judge go last, as Clarence Thomas famously did,” she said. “That set up was guaranteed to end in a ‘he said, she said’ stalemate with all of those senators saying the same thing that they said in ’91.”

Mayer added that Thomas’s and Kavanaugh’s hearings were so similar that “three of the same senators” were sitting on the Senate Judiciary Committee throughout both confirmations.

Later in their conversation, the 29th annual Theodore H. White Lecture on the Press and Politics, the two women reflected on the challenge of covering politics in an increasingly polarized and media-wary nation.

She went on to defend objective journalism from politicians who accuse the press’ coverage of being a partisan attack.

“It’s not propaganda, it’s not resistance. It’s reporting,” she said.

Mayer and Abramson also discussed the difficulties of reporting in the digital age, as reporters are challenged to capture readers’ attention in the tidal wave of information available on social media. Mayer advised young reporters struggling to capture an audience to tell a story in their writing.

“If you tell a story, you’ll ground your audience,” she said.

Abramson and Mayer delivered their remarks to a packed audience at the John F. Kennedy Jr. Forum.

“You could tell that everybody here wanted to be here and for better or for worse [we] are on a team now, a team for facts and reporting and the truth,” said Timothy C. Devine ’17, who attended the event.

Megan Gentile, a student at a local high school, said she enjoyed the event as a “budding journalist.”

“They kind of spoke about telling the truth and just emphasizing the truth in this world when everything can kind of get a little bit crazy, which I think is important to tell to journalists, especially young ones like me,” she said.

Abramson said after the event that her main piece of advice for young journalists is “to just be determined to dig out the truth, to work somewhere that values [the truth] and will give you the time to do it.”