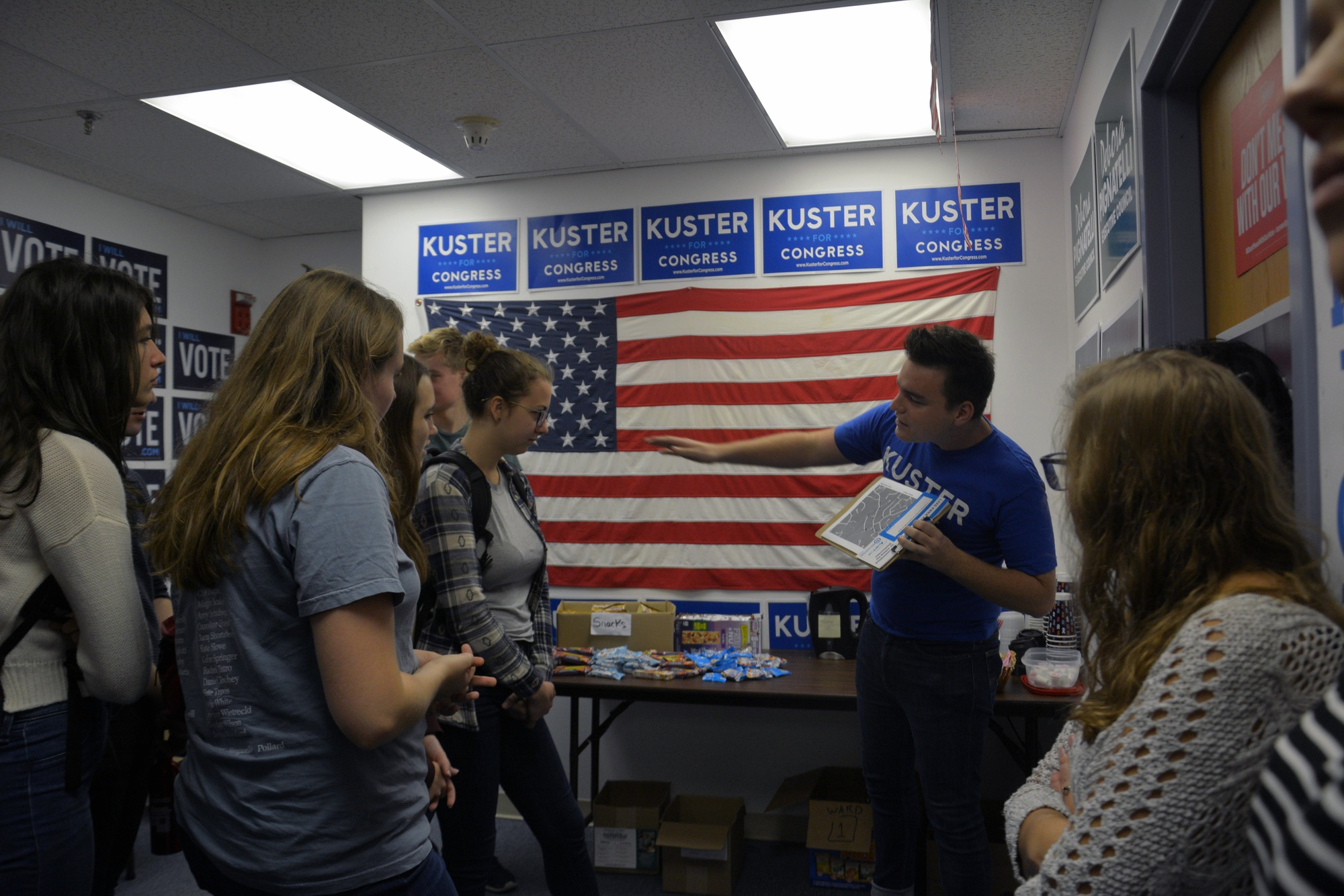 Affiliates of the Harvard College Democrats learn their canvassing routes for a Sept. 22 trip to Nashua, NH.
Advertisement
Advertisement

At freshman convocation this September, University President Lawrence S. Bacow gave students their “first homework assignment”: to register to vote and cast a ballot. This was not a one-off line: It reflects a carefully orchestrated campus-wide effort to get out the vote.
By Simone C. Chu and Abigail L. Simon

It’s hard enough to get a Harvard student to commit to eating breakfast at 8 a.m. on a Saturday morning, let alone travel out of state to canvass. And yet — on a recent week in September — here sit more than 30 members of the Harvard College Democrats, bleary-eyed and battered, riding a school bus to Nashua, NH to canvass for a unified Democratic ticket.

Armed with clipboards, pamphlets, and the Minivan app, students pound the pavement in pairs for a total of six hours. At each door, they campaign for a blue ticket that includes gubernatorial candidate Molly Kelly and incumbent representative Ann Kuster. Rounding out the list are Democrat picks for State Senate, Executive Council, and other State House positions.

“I feel like at Harvard, you can never get someone to sign on to spend their whole day in a different state,” says Hank R. Sparks ’21, the College Democrats’ campaigns director. “So I think it’s a testament to how much interest there is in the midterms that people are willing to invest an entire day.”

The people who dedicate their Saturday mornings to canvassing are certainly outliers at Harvard. There are thriving political organizations on campus, certainly — the Harvard College Democrats, the Harvard Republican Club, and the Institute of Politics (which houses internships, fellows, and many student groups), to name a few. But civic engagement among Harvard students is lukewarm at best.

According to the National Study of Learning, Voting, and Engagement (NSLVE), the Harvard student body voting rate rested at 57.8 percent in 2016. That’s higher than the voting rate for the 1,000-plus educational institutions tracked by NSLVE — a dismal 50.4 percent. But both statistics are markedly lower than America’s overall 2016 voter turnout of 61.4 percent.

Midterm turnout in 2014 was worse. Voting rates at Harvard clocked in at 23.6 percent, compared to 36.4 percent nationwide.

At freshman convocation this September, University President Lawrence S. Bacow gave students their “first homework assignment”: to register to vote and cast a ballot. This was not a one-off line: It reflects a carefully orchestrated campus-wide effort to get out the vote.

This year — a midterm election year — has seen major pushes to shift Harvard culture by increasing political involvement and, with it, voting rates. At the helm of these efforts is a brand new nonpartisan organization called the Harvard Votes Challenge (HVC), which hopes to increase student turnout across all degree-granting Harvard schools.

“In terms of further goals, it’s unfortunately very easy to beat the benchmark set in the last midterm election,” says Derek Paulhus ’19, an HVC co-founder. “The obvious basic goal is to beat that — in fact, to far exceed that.” Harvard now faces the critical challenge of raising these dismal numbers in November.

Why are Harvard’s voting rates lower than those of the country overall? Answering that question, Assistant Professor of Government Ryan D. Enos says, is not an easy task. “I’m not sure if anyone knows exactly why it’s lower.”

Most noticeably, there are some logistical barriers. “Part of it is that you have this disruption. Students pick up and move, and they haven’t put ties down somewhere,” he says.

Professor of Government and Sociology Theda Skocpol corroborates this point. “I guess young people are often on the move, and this country makes it hard for people to register to vote in many places,” she says.

Enos also notes that, in studies, age has always been a consistent determinant of voting rates — which helps explain why student percentages are so low. “It’s just a fact, voter turnout is strongly correlated with age. The older you are, the more likely you are to vote, until you can’t get to the polls anymore,” he says.

“Americans in general don’t turn out at a very high rate compared to other countries. And our older citizens are the ones that follow politics the most closely,” Skocpol says. “They have a big stake in government policies like social security and Medicare.”

Skocpol speculates that social media’s ubiquity allows young people to feel politically engaged without actually heading to the ballot box. “It may also be the case that many young people think politics don’t have much to do with their lives, and think that other forms of expression like social media are a substitute for voting,” she says.

In an age when making a political statement can be as simple as putting a filter on a Facebook profile photo, it can certainly appear that students are more engaged with political issues than ever before. As for whether or not that translates into more direct political action — like voting — Skocpol says she is unsure.

“People’s social ties do matter in making them feel like they have a stake in voting, so maybe to some degree that can help,” Skocpol says.

For that reason, Enos sees college-aged voters as a challenge — but also as a unique opportunity. “All the conditions that are particularly present in the college environment are so valuable — so social pressure, strong networks, all those things are there.”

Catherine Fish, the associate director of the All In Campus Democracy Challenge, has observed efforts to increase voting rates at more than 400 colleges and universities over the past several years.

The most successful schools, she noticed, have a few key strategies in common. “I think it’s places where democratic engagement work is really institutionalized,” she says. That means voter registration and civic education are built into university life, both through events and in classes.

Northwestern recently won the award for “Most Improved Voting Rate” — it shot up a whopping 15.2 percent between the 2012 and 2016 presidential elections. Mechanical engineering professor Michael Peshkin helped direct this push as one of the creators of the NU Votes initiative. The most crucial part of their success, he says, was the physical station established by Northwestern’s Center for Civic Engagement as a mandated part of the freshman move-in process.

“We just make it stations 1-5, and station number 3 is register to vote,” Peshkin says. “It’s like you are here at college, everyone is an engaged citizen, and where do you want to vote?” Peshkin believes these personal interactions and direct conversations helped the voter registration rate at Northwestern skyrocket to 91 percent in 2016 (by comparison, Harvard’s that year was 74.5 percent). “I think that’s responsible for most of our increase — every student has been talked to one on one.”

A group of Harvard students wants to see those kinds of results this midterm year.

HVC co-founder Theodore N. Landis ’20 began leading an IOP polling initiative last spring titled the Harvard Public Opinion Project. “We saw a bunch of indications that young people are among the most engaged in politics they’ve ever been,” he says. “We had this moment, and then looked at the numbers at Harvard and found that we had a lot of work to do.”

Ashley Spillane, the former President of Rock the Vote who was a Harvard Kennedy School fellow at the time, brought Landis together with Paulhus, the chair of the IOP’s Community Action Committee. The two teamed up to co-found HVC — and they built the organization from the ground up throughout the spring and summer.

“The administration has been totally cooperative and helped us when we need it, but this has been student-run, student-organized, and student-driven,” Paulhus says.

HVC has now grown into a full-bodied, university-wide organization. Their approach is three-pronged. First, they lower the barriers to voting by helping students register, providing absentee ballots, and sharing information. Second, they energize voters through events, forums, and other political engagement activities. And finally, they want to ingrain voting into Harvard’s culture.

Each of the 12 degree-granting Harvard schools has its own HVC branch, led by a coalition member. “This challenge is rooted in collaboration — schools should work together to reach their goals,” Landis says. Landis runs the College branch, while Paulhus is in charge of university-wide HVC partnerships and programming.

HVC is striving to institutionalize a campus-wide culture of voting. “I think [our mission] is to make voting and civic engagement a fundamental piece of the Harvard experience and Harvard culture,” says Robert C. Watson ’09, an advisor to HVC at the IOP. “At Harvard, a part of what we do is produce leaders who impact the world. At Harvard, we are actively engaged citizens, we participate — and voting is one of the most fundamental ways to be a participant in democracy.”

HVC also wants to minimize the disparities that are currently present in Harvard’s voting breakdown. “We see in the report that students of color tend to vote at lower rates than white students,” Landis says. “There are a variety of factors that contribute to that, and we at HVC are looking forward to engaging with student cultural groups.”

Recently, HVC organized a “Black Harvard Votes” event and a “Break the Glass and Hit the Polls” event for women. “We want to engage different clusters of students based on different types of diversity that Harvard has,” Watson adds.

It doesn’t stop at voting, though. For one, not all Harvard students can vote. “For international students, and many other types of people who aren’t eligible voters — we want to make them feel like a part of this as well,” Watson says. He adds that the group holds a variety of political engagement events and activities that aren’t solely centered around voting.

And casting a ballot is only one piece of the puzzle. “I would say, first, any civic act can be a launching pad to a lifetime of active citizenship,” Watson says. “So I think our charge going forward should be: how do we use this momentum for other questions of civic importance?”