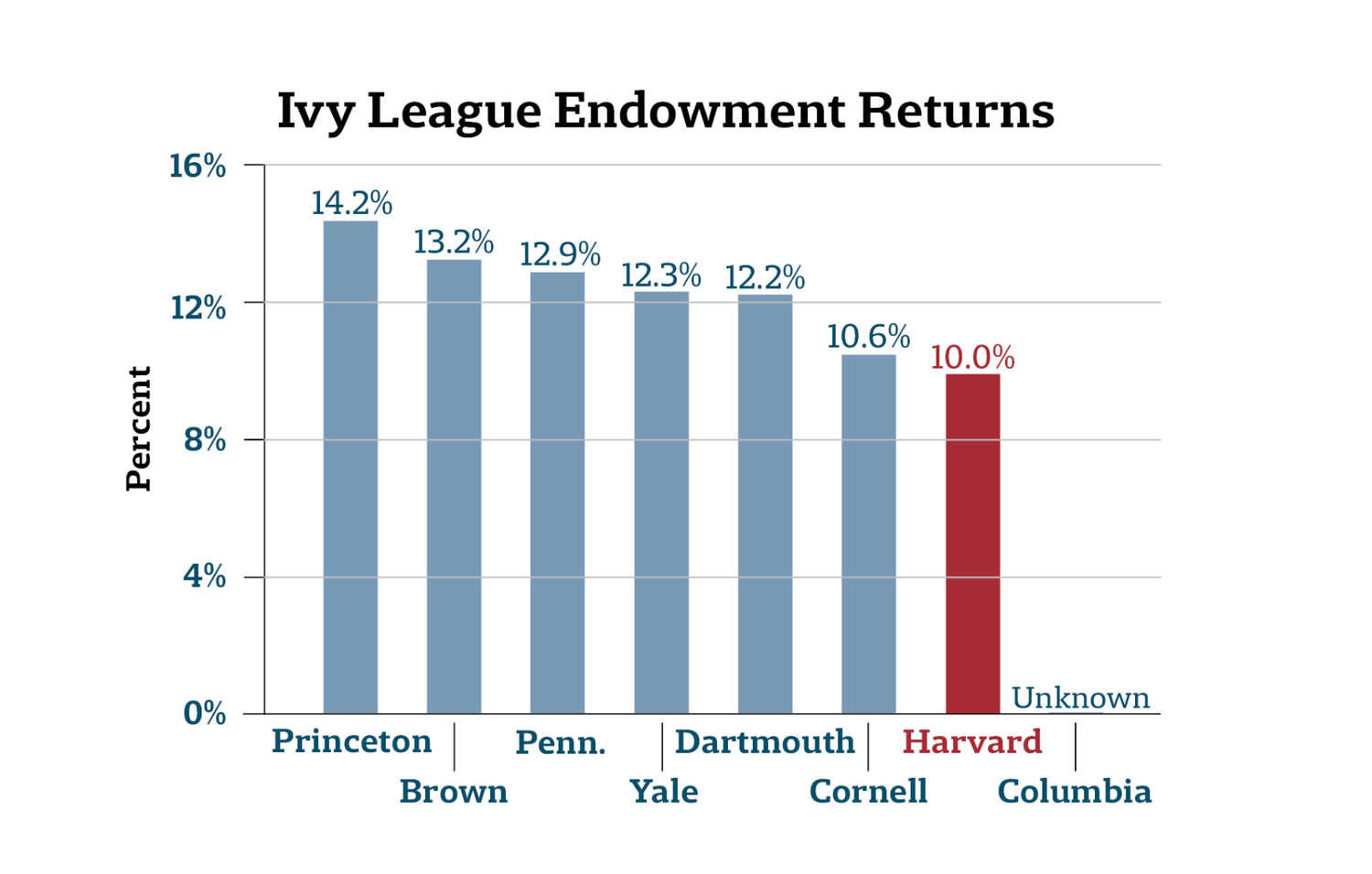 While Harvard’s return on its endowment marked an improvement from last year’s “disappointing” results, the University’s financial growth continues to lag behind its peer institutions.

This year, Harvard has placed last behind its Ivy League rivals, with Columbia University the only school yet to report its results. The Ivy League schools that have so far reported returns saw an average of 12.2 percent compared to Harvard’s returns, which clocked in at 10 percent.

Princeton leads the pack with 14.2 percent returns for fiscal year 2018, up from last year’s returns of 12.5 percent. Brown University, whose endowment is the smallest in the Ivy League, has so far come in second, with returns of 13.2 percent. Penn, Yale, and Princeton all returned between 12.2 and 12.9 percent.

Harvard Management Company — which oversees the university’s $39.2 billion endowment, the largest in the world — has faced pressure to spur higher growth after a decade of mixed results and frequent leadership turnover.

Narvekar, who joined HMC as CEO in December 2016, implemented several changes, including linking compensation to overall portfolio performance, slashing HMC’s staff by half, and making money managers responsible for the entire portfolio, as opposed to certain asset classes. HMC recently sold off some of its natural resource assets and spun-off its real estate division.

“As a general measure of how Harvard’s doing, look at a composite performance of Ivy League peers, and Harvard’s closing the gap finally under Narv,” Charles A. Skorina, the head of a finance executive search firm, said.

In his letter to Harvard affiliates last year, Narvekar said that repositioning the endowment to meet performance expectations will take “a number of years.”

“Each school has a different risk profile. For instance, Yale gets some of their money from endowment, but Harvard gets more,” Skorina said.

For instance, Princeton’s results help the New Jersey-based school fund over half of its yearly operating budget, according to the school’s treasurer report. For 2016-2017, Princeton also anticipated deploying a quarter of its endowment assets towards private equity in 2018.

Harvard has not yet to released a breakdown of endowment assets, though HMC sold some of its private equity assets in 2017.

In an interview last week, Brad R. Balter, a managing partner of Balter Capital Management, said a better indication of HMC’s positional strength may come when growth in assets like private equity, in general, are stagnant.

“When we hit a period when... everything isn’t going up, meaning real estate [and] private equity, which has happened every year for the past eight years, it’s going to be a lot more interesting to see how the endowment performs then, because maybe they are positioned for a less benign environment going forward,” he said.

—Staff writer Eli W. Burnes can be reached at eli.burnes@thecrimson.com