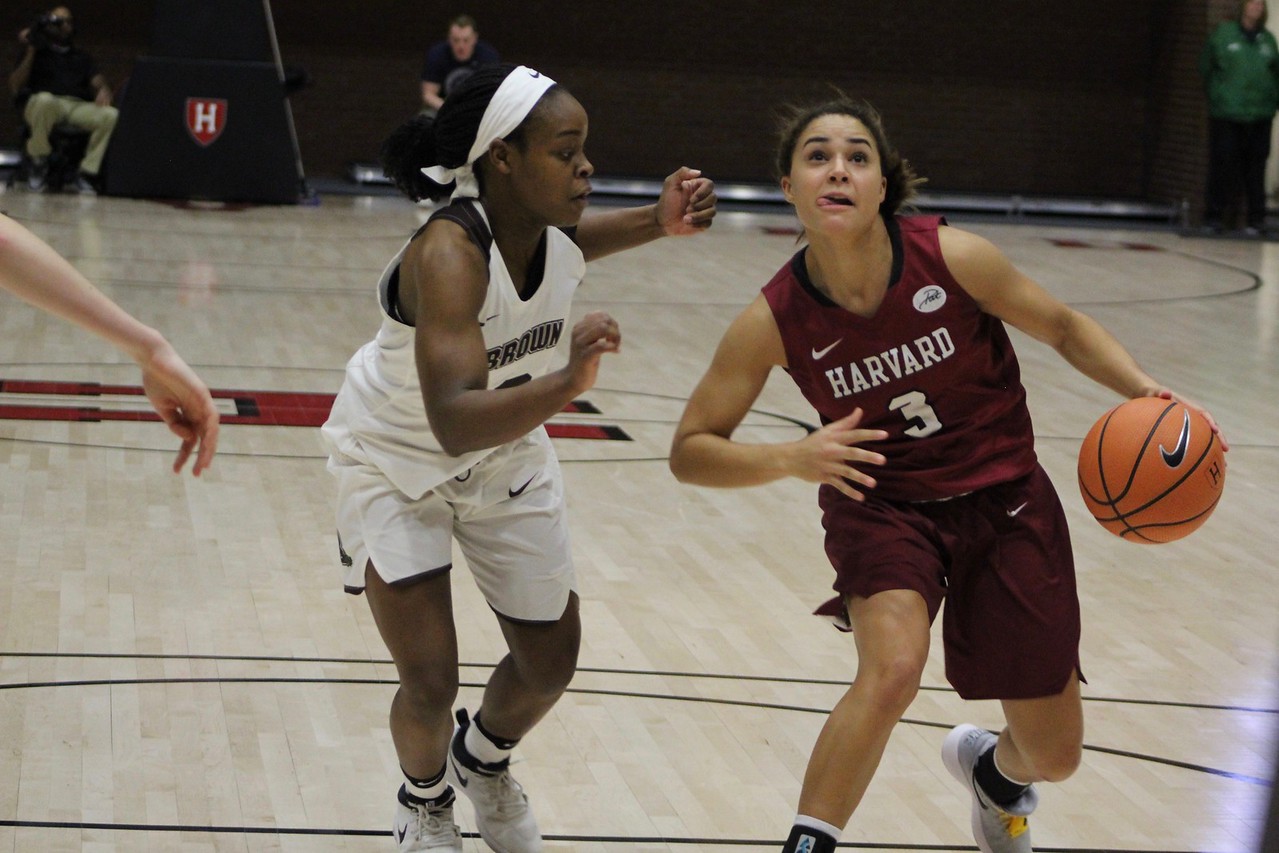 Sophomore guard Katie Benzan driving in the lane against Brown, leads the team in points per game with an 13. By Callie E. Rennyson
By Amir Mamdani, Crimson Staff Writer

The Harvard women’s basketball team moved into second place in the Ivy League, thanks to a two-win weekend anchored by Friday night’s season high 97-point performance against rival Yale.

Senior guard Taylor Rooks and junior guard Madeline Raster were the offensive catalysts for the Crimson in a 97-73 win, scoring 22 and 18 points respectively, and converting on a combined 15 of 23 attempted shots from the field.

Although Harvard (11-6, 3-1 Ivy) will not play Princeton—undefeated in division play—and defending Ivy League champions Penn for two weekends, jumping out to a 3-1 conference record is crucial to the team’s hopes for a run in postseason play.

Harvard is amidst a stretch of six consecutive home games, the final two coming next weekend against Columbia and Cornell, a trend that bodes well for a Crimson team that has not lost at Lavietes Pavilion since March of last year.

Effective passing was the key to the team’s biggest win of the season. The squad dominated the Bulldogs in assists, tallying 28 on just 38 made shots. On the flip side, Harvard was able to limit Yale (9-8, 2-2) to just 24 baskets, of which only 13 of those were assisted.

Quick ball movement and good transition play was integral to Friday night’s blowout win. The team’s 28 assists dwarfed the prior season high of 22, registered in a road loss at Temple.

Raster’s fast-paced guard play was crucial to the Crimson’s high assist total, as the junior guard tallied an impressive nine assists, one shy of a double-double to go along with her 18 points. The nine assists were a career high for Raster, surpassing her previous high seven assists against Eastern Michigan two years ago.

Sophomore guard Katie Benzan also played a key role in Friday night’s ball movement, chipping in six assists, two more than her season average. Friday’s performance was even more impressive for the sophomore from Wellesley, Mass., considering the foul trouble that limited her to just 25 minutes, well shy of the 33 minutes she has averaged this season.

Harvard shot nearly 50 percent from three-point range in the first half, and a mammoth 64 percent for the game by the time the final horn had sounded. That mark far exceeded the previous season high of 48 percent registered in a road win at Northeastern.

Raster and junior guard Sydney Skinner led the aerial assault, combining to knock down 8-11 three-pointers. Skinner’s performance was particularly impressive, as she came off the bench to hit four of five three pointers, finishing the game with 18 points in just 23 minutes.

Rooks chipped in as well, converting both of her three-point efforts, a part of a 9-for-11 performance from the field. Despite her foul trouble, even Benzan got in on the act, knocking down three of her five attempts from downtown.

The Crimson’s sharpshooting accuracy was impressive on a night when Yale’s three-point shooting started with promise, but culminated in a 23 percent mark, one of the key differences on a night when Harvard beat Yale by 24 points.

Although Berkowitz finished with a respectable 19 points in 30 minutes, the Crimson were able to limit her for most of the night, and many of her points came after the win was secure.

Boehm, who scored 10 points in a 20-minute performance, was able to stymie Berkowitz on the defensive end. Harvard was able to frequently double-team and disrupt the star forward, forcing her to commit three turnovers, and holding her to no assists.

Freshman Jadyn Bush also played a crucial role in limiting Berkowitz, coming off the bench and playing 15 minutes of tough, poised defense. Bush registered six rebounds in her limited spell, and she—along with Rooks who snared nine rebounds—were crucial in winning the rebound battle over the visitors by a 40-36 margin.

—Staff writer Amir Mamdani can be reached at amir.mamdani@thecrimson.com.