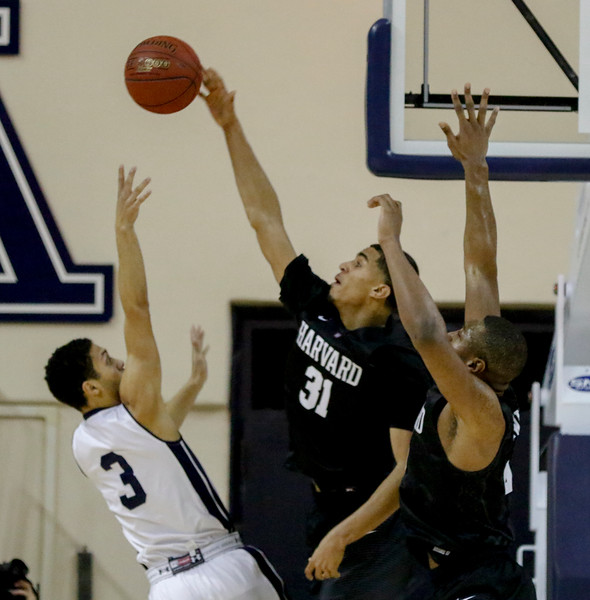 In a low-scoring and gritty affair, Harvard men’s basketball kept its unbeaten streak in conference play through a 54-52 road victory against Yale Friday night.

The Crimson’s overall defensive tenacity was epitomized in its last meaningful defensive frame with 12 seconds to play. Down by three, the Bulldogs (8-11,1-2 Ivy) executed a string of passes to deliver the ball into the hands of sophomore forward Miye Oni. sophomore wing Justin Bassey flew in from Oni’s left and tipped the shot attempt, ultimately landing in classmate Seth Towns’ hands to seal the victory for Harvard (8-10, 3-0).

Although Bassey’s denial was not officially credited as a block, the play was the capstone of the wing’s stifling defensive outing. Largely responsible for covering Oni—Yale’s leading scorer—Bassey limited the wing to just seven points off 3-of-13 shooting while picking up two steals and five boards.

Although this was the seventh straight game in which the Crimson failed to put up over 65 points, Harvard currently leads the Ancient Eight in points allowed with 53.3 points per game. Including non-conference games, the mark of 65.5 points/game puts coach Tommy Amaker’s squad in the top 35 nationwide in this category.

In the course of 40 minutes, Harvard scored just three points on the fast break. Of its total 54 points, nearly half—26— came in the paint. Sophomore forward Chris Lewis, who accounted for seven made field goals and 16 points, played a leading role in this slower-paced, methodical offense.

Amaker placed Lewis on the left block throughout the course of the entire game, matching him up mostly with Bulldogs freshman Paul Atkinson. The Crimson backcourt aggressively fed the Alpharetta, Ga. native from tip-off, positioning Lewis in various spots in the interior to curl to his left hook or deploy a right-handed layup.

“Its very hard to stop [Chris], that was why we wanted to play through him,” Amaker said. “That was the point of emphasis. We always want to play inside out and having Lewis as our interior presence...I thought he came through big time for us tonight and especially in the second half. I thought he made the biggest difference in the game.”

Although Lewis did not pick up any assists in the contest, several successful Harvard possessions concluded with a feed-out to the wing from the big man followed by a second pass. Towns, positioned the entire game on the left corner baseline, delivered five assists while Amaker’s other primary wings in Bassey and junior guard Corey Johnson also combined for six assists.

One challenge for Lewis, however, is developing improved consistency from the free-throw line. In the final minutes of action, the Crimson earned numerous opportunities to stretch out its lead at the charity stripe.

Yale had exceeded the foul limit at the six-minute mark, giving Lewis two late game one-and-one attempts. The season 65-percent free throw shooter rimmed out on both initial shots, keeping the game tied at 47-47 and 49-49. Towns, who delivered two critical free throws in last weekend’s Dartmouth game, also missed on consecutive foul shots with his team up by three in the final two minutes.

In back-to-back games, Harvard has squandered early second-half margins and required a late game revival to defeat its hosts.

Against the Big Green, the Crimson was held scoreless for a five-minute stretch in the final twelve minutes, allowing Dartmouth to even the game with 2:03 remaining. Against the Bulldogs, this phenomenon occurred at almost the exact same span of the game. Down seven points with 10:38 remaining, Yale initiated a 13-4 run to take its first lead of the game with 5:11 left to play.

During this second scoreless drought, Amaker attempted to inject some fresh energy by inserting freshmen guard Rio Haskett and Danilo Djuricic into the lineup. Despite a quick drive-in layup by Djuricic, the points were nullified after an extended official review noted a clock malfunction. Soon after, the duo was subbed out in place of Amaker’s starters.

Sophomore point guard Bryce Aiken, who returned to the lineup after an extended month-long knee recovery, was given seven minutes of action in the second half. However, Aiken lacked a noticeable degree of mobility and agility in his legs and was kept scoreless in the second frame. Aiken’s only points of the contest came on a triple at the 13 minute mark of the first frame, his first bucket since December 6th against Fordham.

“We were just trying to see if we could find minutes for [Aiken] to get him back into any kind of game shape, game rhythm,” Amaker said. “The rhythm was the best way you could really see, he’s out of rhythm. That happens when you have been out as long as he has been.”

The limited options coming off the bench for Amaker created a substantially lopsided minutes distribution and resulted in Harvard quickly turning back to its starters to finish the game. All five of Amaker’s starters were on the court by the 6:27 mark, while Yale finished the game substituting several players in its eight-man rotation in order to play offense-defense.

This minutes distribution may also become an issue in Saturday night’s game against Brown, as the Crimson starters have already logged a combined 165 minutes of play this weekend. In comparison, Yale’s starters accounted for 24 fewer combined minutes.

Amaker’s dependence on his starters, however, has so far equated to victories. This type of resiliency down the stretch will be critical if these extended droughts and opponent runs persist.

“We always know that we have been there before and we understand that we are playing a great team,” Lewis said. “Through our past games and our intensity in practice we knew how to keep our composure, knew that we were going to get a good shot. As long as we lock down on defense, we would be able to stay until the end.”

—Staff writer Henry Zhu can be reached at henry.zhu@thecrimson.com