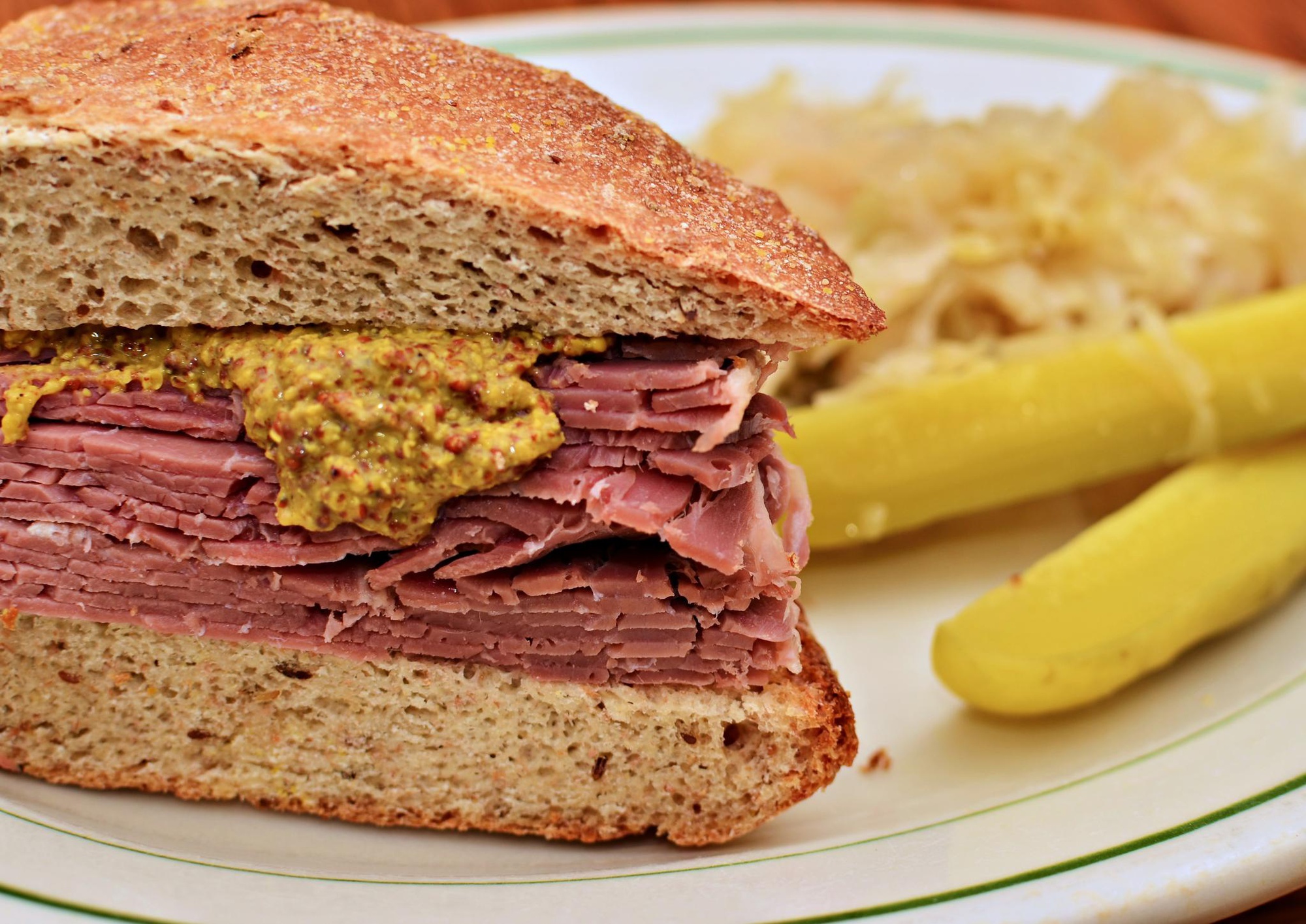 Maven—the Hebrew word for expert—easily describes Alan M. Dershowitz in the courtrooms where he has defended Mike Tyson, O.J. Simpson, and Julian Assange. However, while his unwavering standards for quality pastrami on rye may be as staunch as his support for First Amendment rights, opening a deli was a case he had yet to encounter.
By Sarah Wu

At age 14, Alan M. Dershowitz was working in a New York deli, tying the knots between hot dogs as they came out of the machine. Thirty-five years later, after becoming the youngest full professor at Harvard Law School, Dershowitz decided to bring hearty kosher meats to Harvard Square.

The idea came about as a dare, made when Dershowitz and his friend, Boston lawyer Marcus S. Weiss, were vacationing in Martha’s Vineyard in the early 1980s. Weiss flipped through The New York Times, landed on an article about Jewish delis, and whined, “What I would give for a really good corned beef sandwich in the Boston area!”

Dershowitz, who also lamented the dearth of Boston-area delis, halfheartedly dared his friend to open one. Weiss wholeheartedly accepted the challenge.

The two were no strangers to the world of quality cold cuts. After the hot dog job, Dershowitz had taken jobs at another deli, eventually rising through the ranks to serve on their catering team. Weiss grew up working at his parents’ deli in Atlantic City.

The two spent several years after their Martha’s Vineyard agreement seeking partners, and eventually found 14 investors who were down for the cause.

In May 1988, Dershowitz and Weiss opened Mavens Kosher Court: a classic Jewish eatery complete with sturdy booths, framed photos of famous NY diners, and a corned beef sandwich for $6.95. The building was located at 95 Winthrop Street.

Weiss served as the general manager of the store, coming in before and after his work at the law firm and a few times at 3 a.m. to fix the store’s alarm. Dershowitz oversaw lunch hours. Their nephews, according to Weiss, were their most important support staff. “It was a labor of love,” Weiss says.

Mavens’ most popular sandwich was the Talmudic Dilemma: “If you can’t decide, on one hand get a half corned beef, and on the other get a half pastrami,” the menu says. But the Restricted Club sandwich (no bacon) carried the greatest significance: Maven’s opened in the former location of the now-defunct Pi Eta Speakers Club, an honor society which, Dershowitz says, was closed to Jews.

During the warm summer months, lines would sometimes extend down the block. While customers waited, “we would serve them chopped liver on slices of rye,” Weiss recalls.

But as the winter months came, customers were fewer and farther between. Mavens originally closed on Friday nights and Saturdays, because they were trying to serve the Orthodox Jewish community. By November, due to a significant decrease in revenue, the owners decided to forgo strict kosher certification in order to keep the business afloat.

“I thought of myself as something of a deli maven. But I was obviously not a business maven,” Dershowitz says.

Reflecting, Dershowitz says that their original goal––to offer good food at a good price––was impossible, given the costs of importing premier deli ingredients from New York to Boston. “We could not maintain the quality we wanted to maintain at a price that students could afford,” Dershowitz says.

Despite having generous mentors—including operators of S&S deli in Inman Square and Abe Lebewohl of the famed 2nd Ave Deli in New York—Weiss says he made some costly rookie mistakes, such as buying brand new kitchen equipment when buying secondhand would have been a fraction of the cost. He also cites high turnover in the deli staff as a challenge.

Though it may have been short-lived, the venture was what deli dreams are made of. From hosting Red Auerbach—the coach of their beloved Boston Celtics team—and musicians like Peter Wolf and Yo-Yo Ma, to striving for their mothers’ stamp of approval, Dershowitz and Weiss recall Mavens with a great fondness.

Weiss may consider a more humble endeavor when he retires. “As my father warned me,” Weiss says, “If you’re not going to be there full-time, you really can’t be a successful restaurateur.”