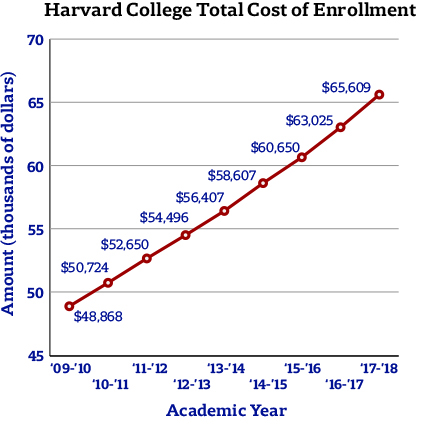 The cost of attending Harvard College will be $65,609 in the 2017-2018 academic year, representing a 4.10 percent increase from last year—the largest percent increase since the height of the 2008 recession.

The rise in costs for board will be the most significant increase in the “sticker price” at 5 percent. Tuition will also increase to $44,990 next year along with a climb in room costs and miscellaneous fees at 4.10 percent and 4.35 percent, respectively.

The rising cost of attendance comes in the wake of poor returns on the University’s endowment that could “significantly constrain” budgets in years to come. Harvard’s endowment posted a negative 2 percent return in fiscal year 2016, shrinking by almost $2 billion and forcing cost-cutting measures across the University.

By Nathan A. Cummings

The Faculty of Arts and Sciences in particular has been affected by budget strains as the University’s largest arm plans on running a “reasonably small” budget deficit next year in order to continue long-term projects like House Renewal.

The Graduate School of Arts and Sciences—a part of FAS—will reduce the number of admitted graduate students by 4.4 percent, and current students will notice an unusually small stipend increase compared to recent years.

The cost of attendance surpassed $60,000 for the first time in 2015, continuing a long-term trend that has included a 31 percent jump between 1998 and 2015 when adjusted for inflation, according to a report by The Chronicle for Higher Education. During the financial crisis, the College increased the cost of enrollment by 4.50 percent for the 2007-2008 academic year.

According to a College Board report on national trends in university tuition, the “sticker price,” also known as the “published price,” of tuition and fees at private nonprofit four-year universities rose by an average of 3.6 percent for the 2016-17 academic year.

The College admitted 2,056 students to the Class of 2021 Thursday, and more than half of all undergraduates receive need-based financial aid through the Harvard Financial Aid Initiative. Students from families with annual incomes under $65,000—comprising roughly one in five undergraduates—are not expected to contribute to the cost of attending Harvard.

The Harvard Financial Aid Initiative was first launched in 2004 under then-President Lawrence H. Summers and awarded more than $172 million to undergraduates in 2016. Last year, the College also announced that students from low-income families would receive “start-up” grants in addition to their existing financial aid packages to help with incidental costs that students incur when transitioning to college.

A previous version of this article incorrectly indicated that students receive "start-up" grants through a pilot program. In fact, the program is no longer a pilot.