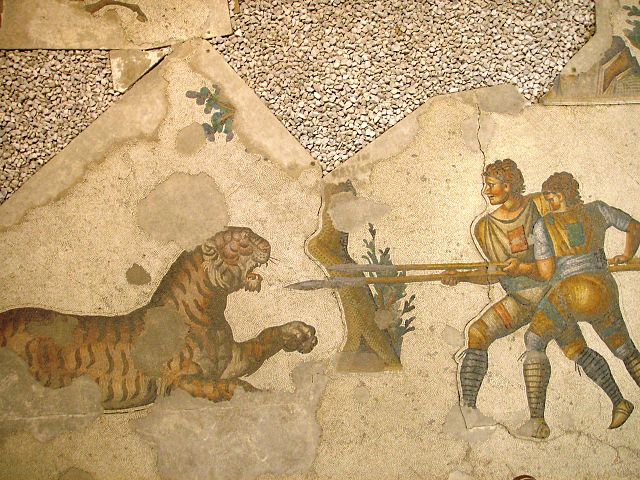 Months of intense off-season training had honed these titans of trivia into mean, lean, quizzing machines. After a contested drachma toss, the games began.
By Hillary A. McLauchlin

It was a battle to the death––two rivals, face-to-face, eternal fame and glory up for grabs. At this year’s Harvard Certamen, the pinnacle of Latin Quiz Bowl achievement, high school teams converged upon the Harvard Colosseum, known colloquially as “Sever Room 103.” Months of intense off-season training had honed these titans of trivia into mean, lean, quizzing machines. After a contested drachma toss, the games began.

The most shocking upset of the day came during the heavily anticipated matchup between the defending hometown champs, the Allston Spartans, and the underdogs, the East Bridgewater Minotaurs.

Despite an early-season thumb injury that had sidelined their MVP, the Spartans took a slight lead. Clinging to a 5-4 lead with seven minutes left in the round, they backed the Minotaurs against a wall, trapping them in a maze of unparalleled Latin quiz knowledge.

The game was over, right? Wrong!

Spectators held their breath as the Spartans delivered an answer containing the incorrect second-person plural imperfect passive conjugation of dūcēminī. With the Spartans on the ropes, the Minotaurs capitalized on this novice mistake and snagged a last minute comeback with the answer “pyrrhic victory.” The roaring crowd––three Latin instructors and James F. Nelson ’18’s seventh grade brother––went wild.

“The Minotaurs performed today like they do every day in practice,” East Bridgewater coach Janet Peterson said. “There’s no substitute for grit, mental willpower, and a vast knowledge of Ovid. We’re off to celebrate with some Felipe’s and a sacrifice to Cronus.”

In the end, the Latin knowledge gleaned and camaraderie built throughout the day’s festivities made every participant a winner. Except for the Allston Spartans. They were fed to the lions.