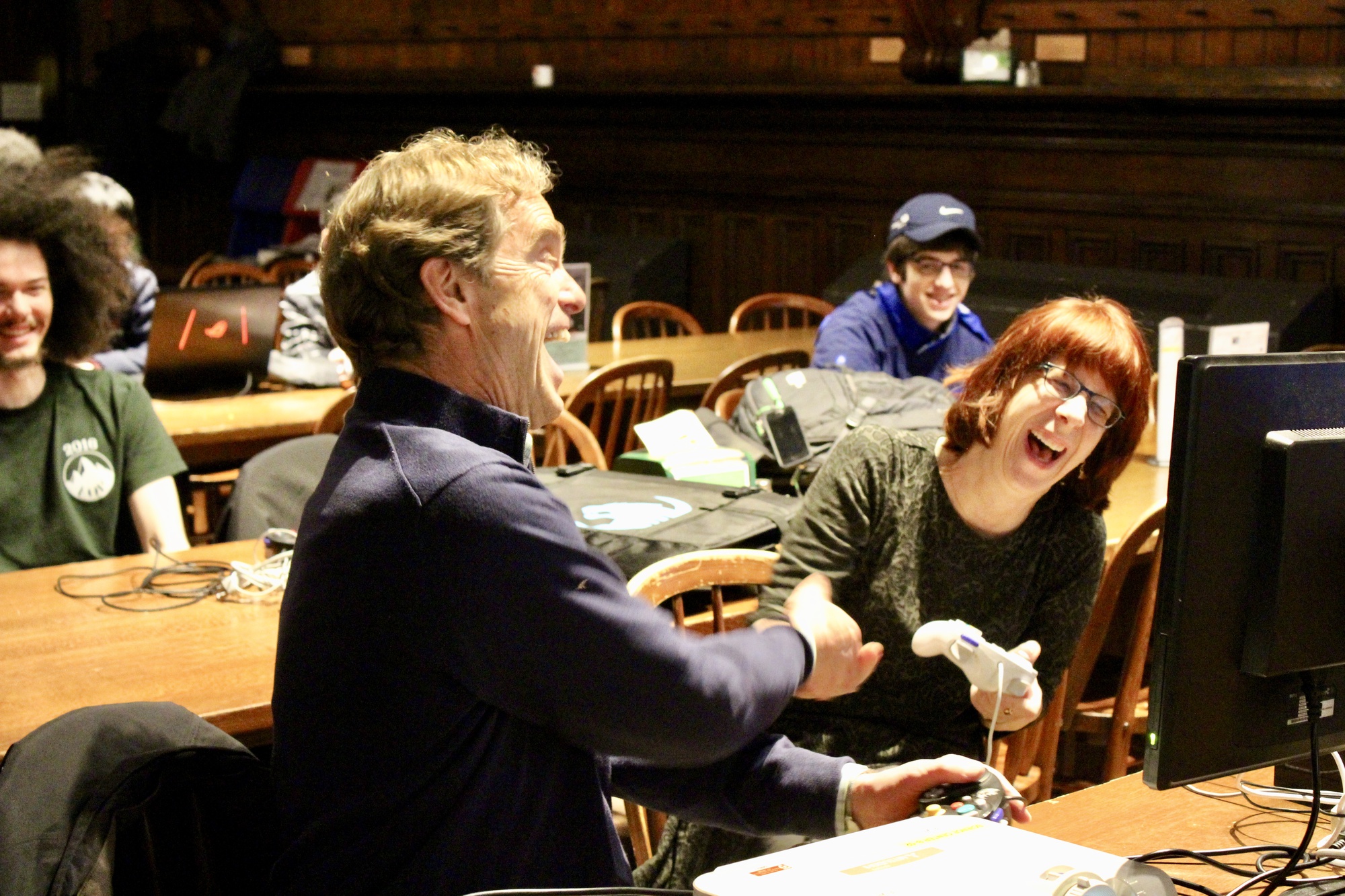 Through the walls of Sanders Theater, snippets of Bach’s “Mass in B Minor” mixed with the jostling of video game controllers and the theme song of “Super Smash Bros. Melee.”

The tables of Annenberg, Harvard’s freshman dining hall, had been pushed aside to make space for several large projectors and a massive Twister board.

Thomas A. Dingman ’67, Dean of Freshmen, scoped out the competition. “I’ve heard Dean Shapiro is bringing her A-game,” Dingman said, referring to Resident Dean of Freshmen for Crimson Yard Catherine R. Shapiro, his colleague and soon-to-be Smash Bros. rival. He paused to ruminate on last year’s nail-biting victory. “I had a big win over Dean Shapiro, so I’ve come back to make sure I keep the trophy,” he continued.

A collaboration between the Freshman Intramural Program and the Harvard College eSports Association, LANnenberg 2017 provided an arena for gaming experts and novices alike to show off skills gleaned through late nights of procrastination in an effort to win glory for their dorms.

Unlike traditional intramural offerings, LANnenberg consists entirely of virtual challenges: The event includes Super Smash Bros. and “League of Legends” tournaments. Events like LANnenberg provided an opportunity for the eSports Association to increase its visibility on campus.

“I think that the really cool thing about this—doing it through the intramural program—is that it’s a great way to reach kids who are not already affiliated with an e-sports league,” Leopold V. Bottinger ’20, a participant in the tournament, said. More than 100 students registered in this year’s competition.

According to Benjamin N. Iuliano ’18, co-president of the eSports Association, events like LANnenberg provide a positive social outlet for students.

“These [games] are things people will already do in their dorm rooms anyway, so it’s giving them a way to also come together, to meet one another, to really sort of grow a community,” he said.

With much of the game locked in a tie, Dingman scored a resounding victory with one final, exploding egg. Within moments of Shapiro’s crushing defeat, her younger son, Robert, challenged Dingman in a match to reclaim the family’s honor.

Tyler F. Moulton ’20, in the middle of a Twister round, recognized the appeal of events like LANnenberg for those less interested in traditional sports.

“There’s always events like this where you meet people that you’ve never met before,” Moulton said. “Because even though it’s a kind of a small school, there’s still two thousand of us.”

Students continued to trickle into Annenberg, munch on nachos, and pick up controllers throughout the evening. Citing other events this year, including an intramural spelling bee and innertube water polo match, Dingman praised the event and those like it.

“[Freshman Dean’s Office Department Administrator] Brandon Edwards and his undergraduate leaders have been brilliant in trying to bring people out,” Dingman said. “It’s all about participation and making sure people have a chance to get away from their problem sets and have fun.”