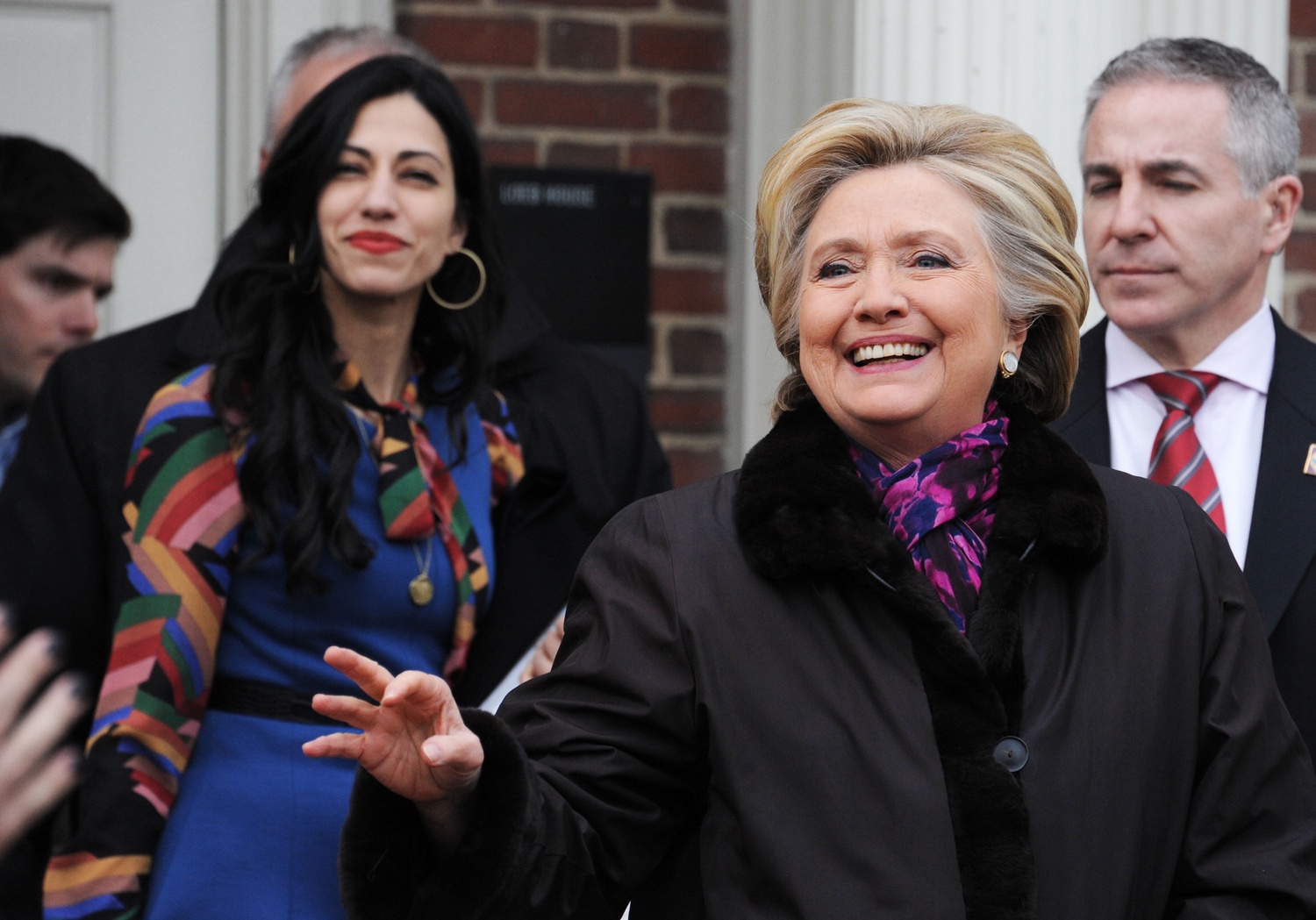 Hillary Clinton waves at a crowd of students gathered outside Loeb House on Friday afternoon. The former Secretary of State visited Harvard's campus to be interviewed as part of a joint Kennedy School, Law School, and Business School project. By Derek G. Xiao
By Julia E. DeBenedictis, Crimson Staff Writer

Several dozen students listened to Hillary Clinton speak about her own college experience at Wellesley and the value of learning from peers’ experiences and perspectives at a “Fireside Chat” in Kirkland House Friday.

Undergraduate members of the Instiute of Politics' Student Advisory Committee, some board members of the Harvard College Democrats, and five Kirkland students who received lottery tickets attended the chat. Jesse I. Shelburne ’18 and Sharon Yang ’18, the student president and vice president of the IOP, respectively, moderated the discussion with Clinton.

After her appearance in Kirkland House, Clinton took part in an interview later that day for the “American Secretaries of State Project: Negotiation, Diplomacy, and Statecraft,” a joint effort of the Law School, the Kennedy School, and the Business School.

Students who attended the Kirkland talk said the small size of the event made it feel particularly intimate, and that they admired Clinton’s optimism and the candor with which she spoke about her own formative experiences in college.

“You never get a sense of who politicians are. But getting to hear Secretary Clinton talk about her life, and and her college life, was really really cool to see because you don’t get to see that,” said Christie F. Cheng ’17, one of the five Kirkland residents who received a ticket through the lottery.

“I’d say the main difference between a big lecture and an informal chat was that even though she came in with certain ideas that she wanted to communicate, it wasn't a prepared speech,” Cheng continued. “It made the experience much more meaningful, and we became very aware that this was a privilege to hear her speak candidly.”

Matthew Moore ’19, the treasurer for the College Democrats, said it was powerful to hear about Clinton’s college years.

“Her talking about her time at Wellesley, and how that shaped her, was something I had never heard from her. So it was interesting to hear how Hillary Clinton became Hillary Clinton,” Moore said.

Reed T. Shafer-Ray ‘18, the legislative director for the Democrats, said Clinton “was a big fan of putting down the phones and really trying to make good friendships.”

He added that Clinton talked about how “school isn’t just about the classroom, you need to sometimes put the book down and talk to your classmates and that that is where you can get some of your most enlightening experiences.”

The former Secretary of State also spent time talking about the continuing fight for women in politics, which Cheng said was powerful to hear.

“Being at Harvard we probably have one of the biggest advantages [as women], and she spoke a lot about how it can be a brutal world—a man’s world— and that was really special,” Cheng said.

“You would always hear that she was much more funny in person and that you just didn't see it on the campaign and that just showed—we were cracking up at some of the things she was saying,” Gildea said. “[We saw] that she is on her feet fighting and also able to make funny quips of her experience.”