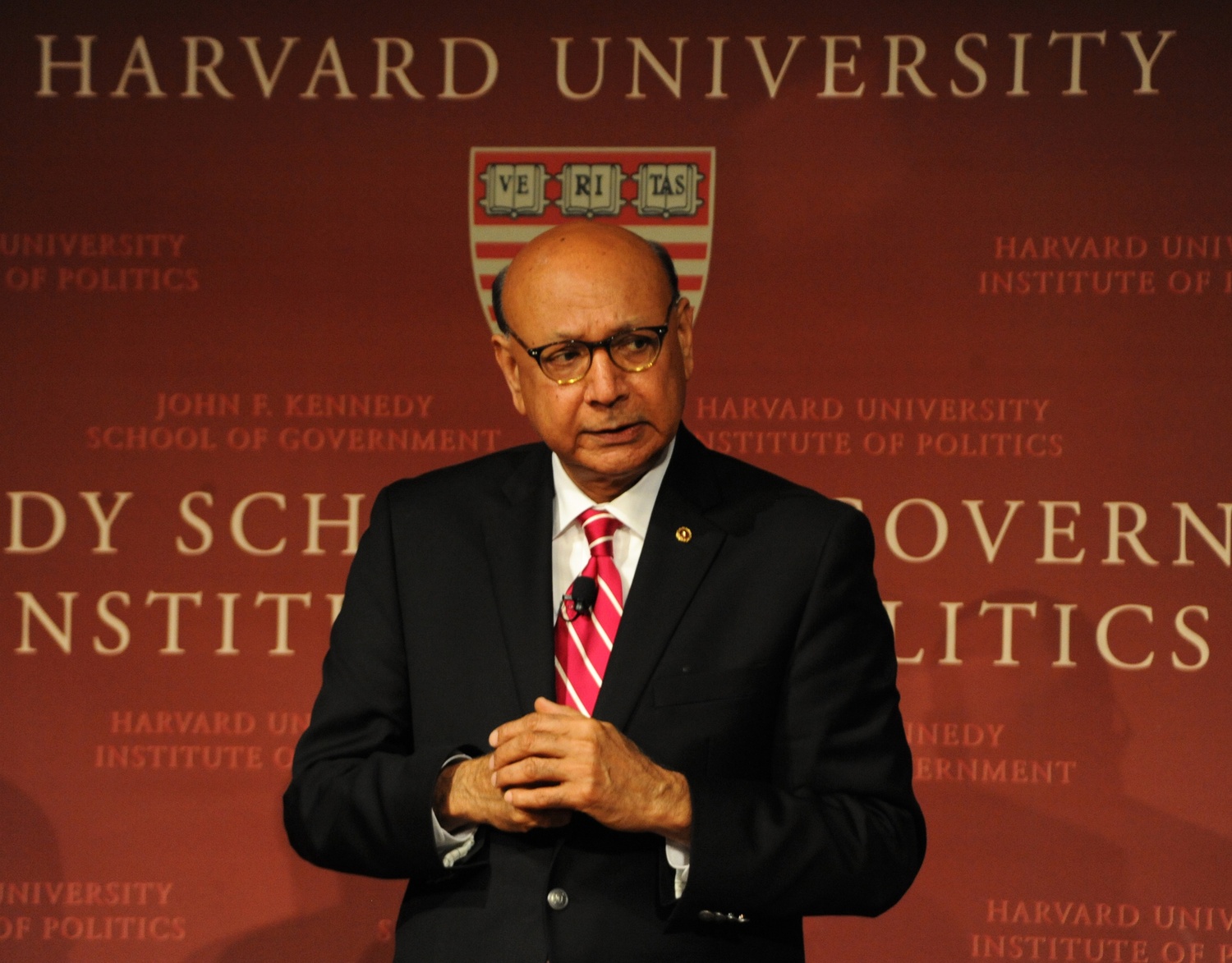 Khizr M. Khan discusses the letter that inspired him to take the stage at the 2016 Democratic National Convention at the JFK Jr. Forum at the Harvard Institute of Politics Wednesday night. By Matthew W DeShaw
By Lucas Ward, Crimson Staff Writer

Khan gained famed when he spoke at July’s Democratic National Convention and denounced Trump’s attacks on the “character of Muslims.” Khan’s son, Humayun S. M. Khan, fought in the Iraq War and was killed in 2004. Khan called Trump’s campaign platform of a Muslim ban unconstitutional, and publicly endorsed Hillary Clinton in his speech.

“Let me ask you, have you even read the U.S. Constitution?” Khan asked Trump at the convention. “I will gladly lend you my copy.”

Trump drew criticism when he said that Khan's wife had not spoken at the D.N.C event because she had not been "allowed" to. Trump wrote shortly after the convention that he thought “Khan who has never met me, has no right to stand in front of millions of people and claim I have never read the Constitution, (which is false) and say many other inaccurate things."

At Wednesday’s event, Khan stood in front of an audience of dozens and further criticized Trump and his policies.

“We are faced right now with an administration without moral compass,” Khan said. “There is no distinction between lies and untruths and honorable military officers are misleading my country, misleading the administration.”

Khan also denounced Trump's recent executive order suspending immigration from seven predominantly Muslim countries as antithetical to the United States Constitution. Khan also said that Michael T. Flynn, Trump’s former national security advisor who resigned on Monday, was “undeserving of his military rank” and that he “jeopardized lives” by lying to the administration,

Both in his DNC speech and on Wednesday, Khan came out in passionate support of the Constitution.

“I fell in love with the Constitution of the United States not recently—long ago,” Khan said. He added that his upbringing in Pakistan made him appreciate the civil rights he was denied under Pakistan’s government.

“I have lived without them, therefore I appreciated them more than anyone else,” Khan said.

At the event, Khan read the Constitution's 14th amendment, which prohibits the government from depriving U.S. citizens’ the rights to “life, liberty, or property, without due process of law.”

Khan said he though the Amendment is “so relevant… because of the moral compass-less White House.”

He also read a passage from a 1998 book called “Achieving Our Country,” which many say predicted Trump’s rise to the White House. The passage spoke about mobilization of working class Americans against government status quo.

Khan concluded the event on an optimistic note, again evoking the Constitution.

“The Constitution of the United States aspired to endure time. For it to endure time it must live in the hearts and minds of people,” he said.