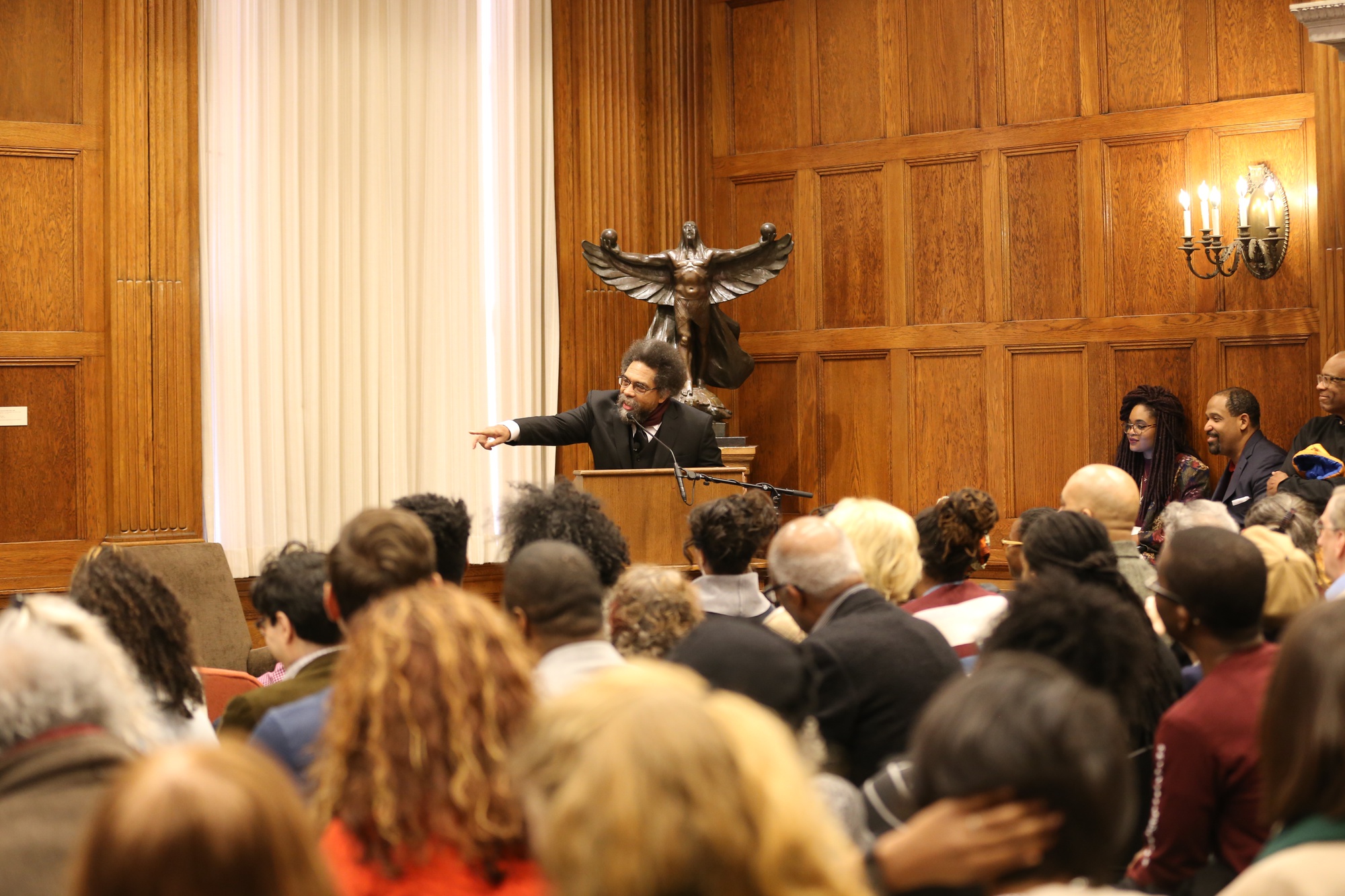 Cornel West delivers a fiery speech titled “The Trump Era: Hope in a Time of Escalating Despair” on Wednesday, January 25th, 2017, in which he decried neoliberalism and neo-fascism, evoked the spirits of preeminent black activists, and urged listeners to act as “warriors” in the next four years.
Advertisement
Advertisement

Hope as Practice: A Conversation with Cornel West

Spotting his colleague and friend Brandon Terry from afar, West shouts, “Stay strong, Brother Brandon!” and departs from our interview for “Just one second.” For a few minutes, onlookers smile, stare, and chatter eagerly at the sight of West. He exclaims, “I’m blessed to be here! I’m blessed to be here!” In response, a woman shouts, “We enjoy your blessing!”
By Jenna M. Gray

This January marks the return of professor Cornel West—black philosopher, political theorist, activist, author, and democratic socialist—to Harvard University. On Jan. 25, West delivered a fiery speech titled “The Trump Era: Hope in a Time of Escalating Despair,” in which he decried neoliberalism and neo-fascism, invoked the spirits of preeminent black activists, and urged listeners to become “warriors” in the next four years. After his speech, West spoke with Fifteen Minutes to tell us about his thoughts, plans, and hopes for the semester. 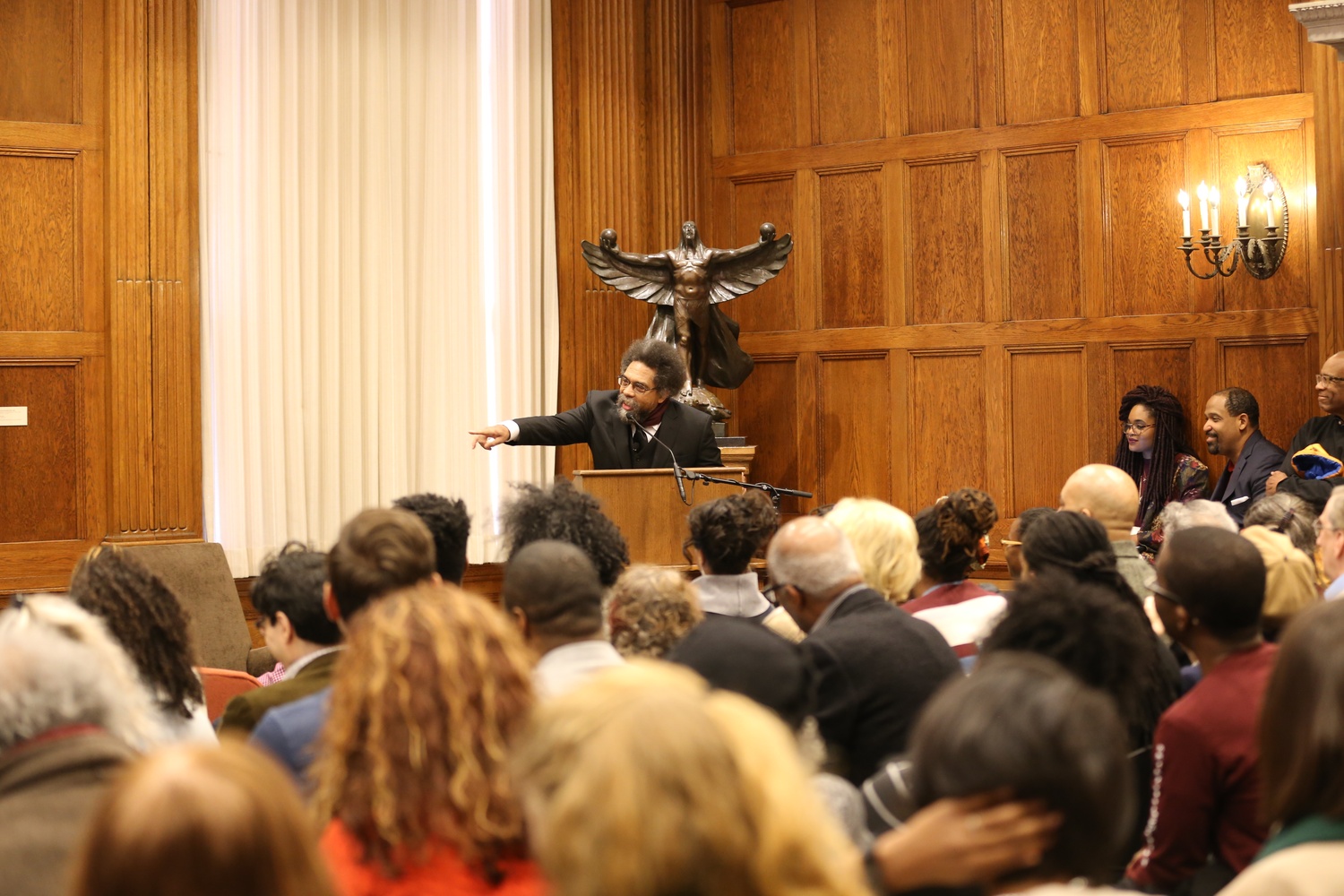 Cornel West delivers a fiery speech titled “The Trump Era: Hope in a Time of Escalating Despair” on Wednesday, January 25th, 2017, in which he decried neoliberalism and neo-fascism, evoked the spirits of preeminent black activists, and urged listeners to act as “warriors” in the next four years. By Cynthia Guo

FM: This issue is about new beginnings. You’re coming back to Harvard after 17 years. Why did you decide to come back?

CW: Well, I had already retired from Princeton, I had already retired from Union Seminary, and I got married and my wife is in Boston, and I said, “maybe I can still be of some use to an institution in the Boston area.” And of course there’s no institution of higher learning in the Boston area that I love more than my own Harvard, that shaped me in so many ways. And I was talking before about Martin Kilson, Preston Williams, Israel Scheffler, Robert Nozick, Stanley Cavell and so many others who mean the world to me. So when the possibility [of returning] became real, I salute[d] the President, I salute[d] the Provost for being open to bringing me back.

FM: In your colloquium speech, you talked about the importance of being “a hope” rather than just having hope. So what does that mean to you, here and now, in 2017, as a Harvard University professor?

CW: It is profoundly Aristotelian... It’s a matter of embodying and enacting a certain kind of virtues. It’s not just a matter of having a discourse. It’s a way of life. It’s a mode of being in the world. Now as a Christian, for me, it’s primarily faith, hope, and love. But I take very seriously other traditions as well—secular traditions, religious traditions of the east and what have you. It’s a matter of choosing to be a certain kind of human being before you die. And it has to be in your practice, it has to be in your habits, in your deeds, in your actions—Rabbi Abraham Joshua Heschel is one of the great figures for me in my own life, and he always talked about deeds, deeds, deeds. Deeds of kindness, deeds of truth telling, deeds of witness bearing for justice. And I take that very seriously.

FM: In your speech when you were talking about different values, I heard integrity come up a lot. Why is integrity so important to you?

CW: In a market-driven culture in which everyone’s up for sale and everything is up for sale, integrity cuts up against the grain. And I think integrity is one of the perennial aspirations of those who want to live a moral life. We need it badly. There’s no ideological monopoly on integrity. Integrity comes from the right, the center, the left, the Christian, non-Christian, Jewish, non-Jewish—it’s a profoundly human thing. Now, it’s true that I’m very much of the left in terms of my politics, but I have great respect for persons of integrity no matter what their politics are.

FM: And you’re teaching two classes at the University this semester.

CW: One at the Law School, American Democracy with Roberto Unger, my dear brother, and then the course on DuBois at the Divinity School.

FM: Why did you choose those two courses?

CW: I taught the course with Roberto Unger in the ‘90s—we actually wrote a book together on American Democracy and I figured well, what timing, given the Trump Era, American Democracy, perfect. And with DuBois I wanted to start off with [him] given his unbelievable status.

Spotting his colleague and friend Brandon Terry from afar, West shouts, “Stay strong, Brother Brandon!” and departs from our interview for “Just one second.” For a few minutes, onlookers smile, stare, and chatter eagerly at the sight of West. He exclaims, “I’m blessed to be here! I’m blessed to be here!” In response, a woman shouts, “We enjoy your blessing!”

FM: I see you’re pressed for time. Our magazine is called Fifteen Minutes, so could you could give us a fifteen second briefing on the class American Democracy? What do our readers need to know?

FM: And on DuBois’ political philosophy?

CW: With DuBois, you’re just dealing with a genius and a giant from social science to art to history to sociology. There’s been nobody like him and reading him, you’re reading the history of the American empire.

FM: I want to go back to your hopes. What are your hopes for your return to Harvard?

CW: To keep alive a great tradition of those who tell the truth and bear witness to justice. We have Martin Kilson, such a towering figure, the first black tenured professor at Harvard. And to pass it on to the younger generation, you got figures like brother Brandon Terry who is just brilliant and part of the same tradition. For me, to be just one conduit or vehicle is a beautiful thing.

FM: You also talked about the importance of finding your cause. What is your hope for student activists and Harvard students who haven’t yet found their cause?

CW: I want them to find their voice, which is a calling, and to find [their] cause—but each one, each individual has to choose. I can’t do it for other individuals. But that’s part of what it is to have integrity: to be able to be true to yourself.

FM: Have there been any major changes in your thinking since you were last at Harvard 17 years ago?

CW: No, just more fortified to tell the truth and speak for justice, but it’s the same. I got to run! One more.

FM: Any parting words that you would like to say?

CW: I would just say to the younger generation that you all, if you so choose, can be tied to a great tradition of excellence that’s linked to justice and that in your learning, you can be forces for good, then you pass on [that tradition] to the next generation.