Every year, students flock to the annual showdown between the Harvard and Yale football teams. The bleachers at other sporting events, however, are often sparsely populated.
By Grace A. Greason and Mila Solaja 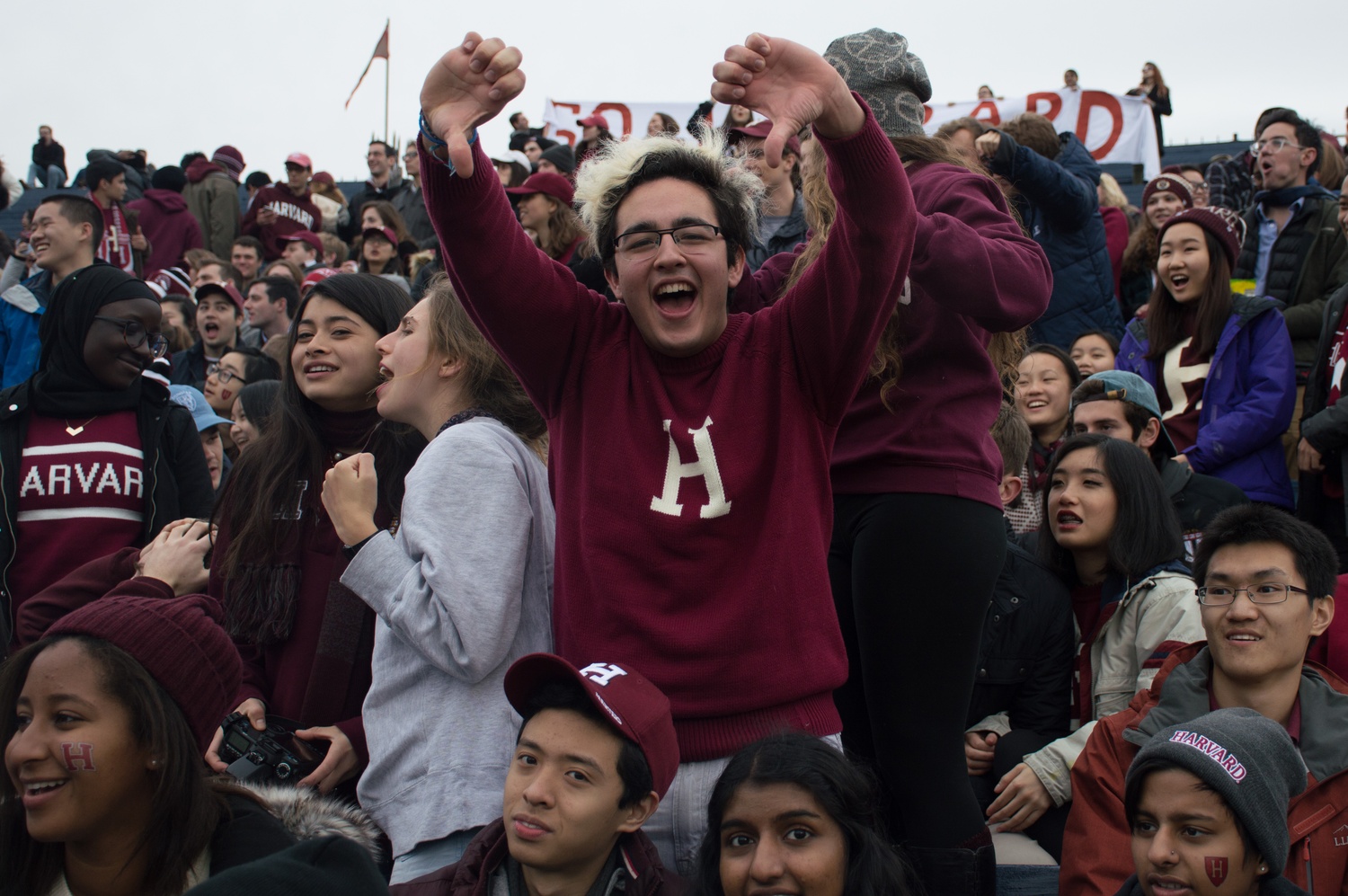 Leo A. Garcia '21 cheers for Harvard at the Harvard-Yale game earlier this semester. By Megan M. Ross

Every November, Harvard students don their crimson apparel and flock to the Harvard-Yale football game, packing bleachers shoulder to shoulder.

Harvard-Yale is no two-hour affair; preparations for the Game begin a week in advance with College-sponsored student events leading up to the much-anticipated game. On game day, students rise early and crowd together at tailgates and in the stands, forming a sea of crimson.

The bleachers at other sporting events, however, are often sparsely populated.

While Harvard boasts more varsity teams than any other Division I program in the country, with 42 teams in total, the College falls short in school spirit when it comes to athletics, according to some athletes, coaches, and departmental administrators.

“It’s not necessarily the cool thing to do, to go support a sports team and be in the students’ section,” said Robert W. Feinberg ’19, a member of the varsity men’s basketball team.

Student-athletes and Athletics administrators identify a lack of awareness, physical distance, and the challenge of competing with other extracurricular activities and academics for Harvard students’ time as main barriers to attendance.

The Athletics Department has tried to overcome these obstacles with the introduction of a rewards program and the recent launch of a new student-athlete marketing initiative this fall. For some lucky superfans, regular attendance at Harvard sporting events reaps material rewards, ranging from airline tickets to iPad minis.

According to Associate Director of Athletics for Marketing and Sales Susan Byrne, attendance at sporting events has declined across the board within the NCAA. While Byrne said the department is interested in game attendance and tracks the number of students at ticketed events, she declined to provide statistical data beyond the attendance figures at four specific games this semester.

Byrne said a general absence of a large sports culture on campus could be among a number of factors affecting game attendance.

“There’s a lot of House spirit at Harvard but not necessarily Harvard school spirit,” Byrne said.

“I tour guide for the admissions office and one of the people was asking me for school spirit here at Harvard,” Zeufack said. “For me, personally, it’s lacking a little bit in sports.”

Publicizing games to students and providing accurate information about ticketing costs have also been problems, according to Byrne, who said many students are unaware that they can attend ticketed games—football and men’s and women’s basketball, ice hockey, and lacrosse—for free.

Still, emails from the Athletics Department that advertise weekly events include a link to “buy tickets” under each event. Additionally, the upcoming games featured on the Athletics Ticket Office website do not inform students that they can attend for free.

Byrne said the Charles River also serves as a “great divide” between Harvard’s students and its sporting events, most of which take place on the side of the river opposite student housing. While students living in River Houses are around a 10-15 minute walk away from Harvard Stadium and Blodgett Pool, according to Google Maps, those living in Pforzheimer, Currier, and Cabot Houses must walk for nearly half an hour to reach these facilities. 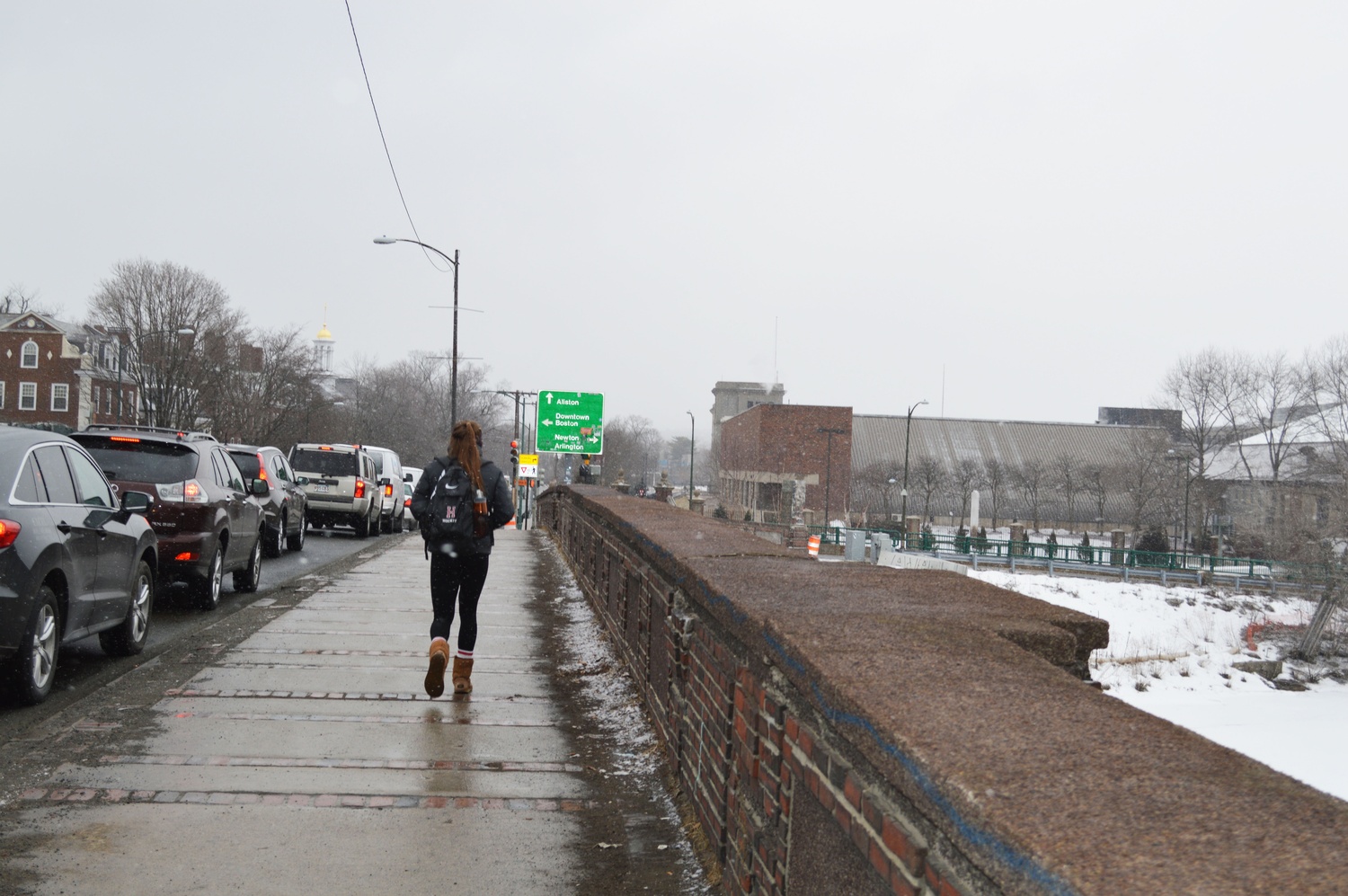 A member of the women's hockey team jogs across Anderson Bridge to get to practice. By Christopher J Magnani

“It’s maybe a two-thirds of a mile walk for most Harvard dorms,” said Feinberg. “And our games are played in the winter so it’s very cold. And that just kind of discourages some people from even wanting to cross the bridge and go all the way down there.”

Sports teams like polo, whose home matches are typically 25 to 30 miles away from campus, find it even more difficult to get students to attend.

“It’s hard for players to get down for practice,” said Crocker Snow Jr., the head coach for the polo team. “It’s equally hard for friends and family that want to see them play.”

Peter Brand, the head coach for men’s and women’s fencing, said students’ unfamiliarity with a sport and its rules can also prevent them from attending events.

“It’s complicated, and that’s why you don’t get a huge amount of interest as far as spectators are concerned,” he said.

Time is another factor that plays into game attendance, often serving as the biggest obstacle for students.

A. Casey Carter ’20 said it is hard for students to keep time open to attend games; he said he himself usually only goes when they “revolve around social events.” Extracurricular commitments also keep students from attending games, according to Ashri Anurudan ’19.

“Clearly, the academic road and the number of activities that are not sports—recreational clubs and things—is way higher than when I went to college,” Snow said.

Over the last few years the Athletics Department has developed two major initiatives to increase attendance at sporting events.

In 2014, it launched the CrimZone Rewards app, which allows students to earn points for checking into athletic events. Students can later redeem their points for prizes such as clothing, gift cards, and electronics. 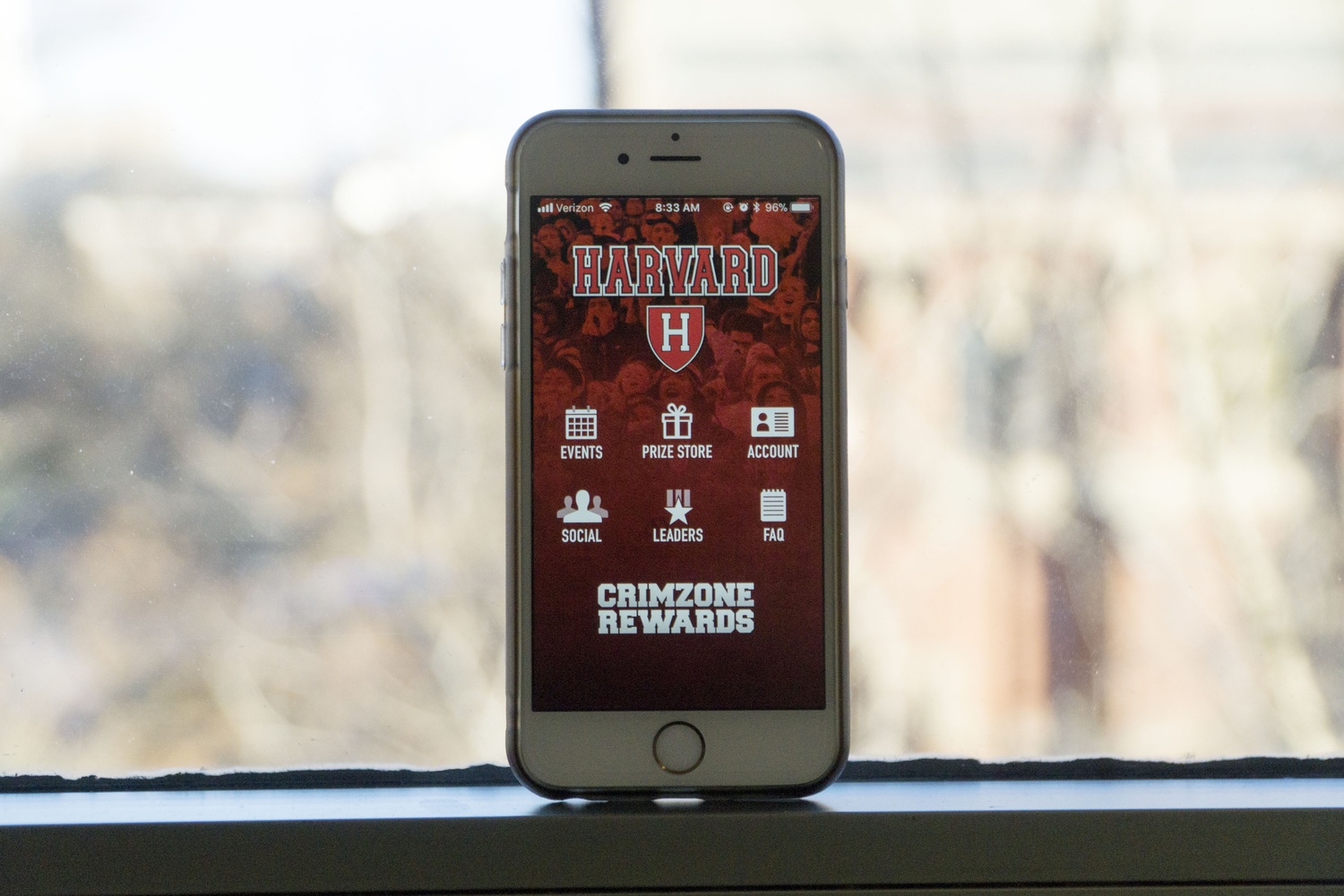 The Crimzone Rewards application offers points for attendance to sporting events, and informs users of giveaways occurring at events. Points can be redeemed for prizes. By Allison G. Lee
Advertisement

Many colleges offer a similar rewards program, said Byrne, but Harvard “put a different spin on it” by offering students extra incentives at so-called “featured” events. Ticketed sports typically have two featured games per season, while all others have one.

While most athletic events are worth 10-15 points each, students can earn up to 50 points at a featured event if they stay at least halfway, according to the app. These games typically also offer free food or giveaway items like burritos or t-shirts and are heavily promoted by athletes. Since the app’s launch three years ago, there have been nearly 33,000 check-ins to featured events, according to Byrne.

This semester, students could exchange the points they earned for prizes ranging from a Harvard frisbee—redeemable at 250 points—to Ray Ban sunglasses worth 1,200 points. For 100 points each, CrimZone users could also buy raffle tickets to enter to win one of the app’s Grand Prizes: gift cards to Southwest Airlines and REI and an iPad Mini, each valued at hundreds of dollars.

For Julia M. Baumel ’18, a member of the women’s lightweight crew team, the opportunity to compete with a friend for the most points motivated her to attend many sporting events throughout her sophomore fall. Earning more than 1,000 points for attendance, Baumel received $400 in Southwest Airlines credit and a pair of Beats headphones.

Michael B. Alber ’21 was one of the 50 users featured on the CrimZone Rewards app’s leaderboard this semester. Finishing the semester at 19th place with 395 points, Alber said he accrued them attending a variety of sports games and chose to redeem them for raffle tickets.

A member of the men’s cross country and track teams, Alber said he had a “head start” in downloading the app and accumulating points because his teammates told him about it in the beginning of the year. He said he’s used the app to check into 12 games this semester.

“I generally like going to events and cheering on the team and the spirit aspect of it, and the rewards are also an extra incentive,” Alber said.

Other students are less enthusiastic about—or simply not aware of—the chance to earn the app’s prizes. Carter said he has only used the app once, to receive a free t-shirt. Justin Zhu ’21 said he’s been to a football game, but he has never heard of the app.

Bradley C. Fusco ’19, a member of the varsity women’s hockey team, said that she thinks the app has been effective, but that its use is not necessarily widespread among the general student body.

Regardless, coaches and athletes said they believe the app has been successful in driving up student attendance at games.

“I know that our department tries to correlate the rewards program with the matches that are most important, our big matches,” said Traci L. Green, head coach of the varsity women’s tennis team. “So for us that’s been effective. We have a larger amount of folks coming out to support our matches when we do have the CrimZone Rewards program.”

This fall, the Athletics marketing department has undertaken another initiative to increase student attendance through the creation of the Chief Marketing Officers program, in which athletes from each team serve as liaisons between the department and the general student body.

As CMOs for their teams, athletes suggest prizes that CrimZone Rewards users can redeem for points, brainstorm ideas for featured events, and plug events to their classmates in person and online.

“I bring the ideas that my team has about featured games, giveaways, etc. to marketing and I’m in contact with them about what we can do to get more fans, get more activity on social media,” said Fusco, who serves as the CMO for the women’s ice hockey team. “I administer schedules for my teammates to hand out and post across campus to get people knowing when our schedule is.”

While coaches say the program is still in its development phase, Byrne said some CMOs have already made strides in increasing attendance at their events. 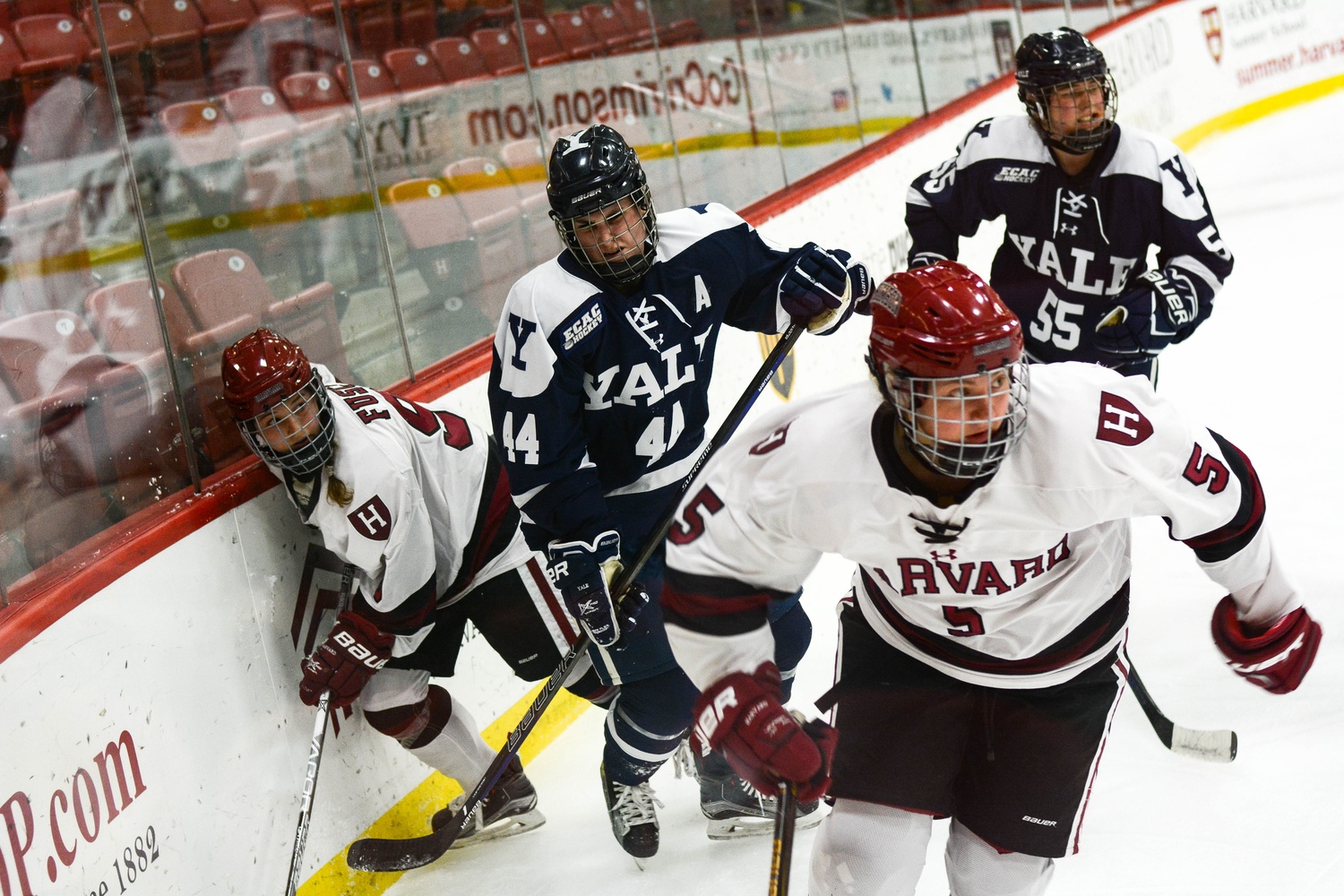 Byrne said Fusco was the brains behind the team’s “Light the Bright-Landry” game against Princeton this month. In addition to earning bonus CrimZone Rewards points at this featured event, student attendees were able to receive free t-shirts and glow sticks, enjoy complimentary pulled pork and macaroni and cheese, and spin a carnival wheel for additional prizes.

Feinberg, who is the CMO for the men’s basketball team, decided to designate a student section leader at his games. He said the chosen student, a freshman who is friends with members of the team, has already been in touch with the Athletics Department and is in charge of publicizing games, leading chants, and engaging spectators.

“Sometimes it’s not as much the amount of people we have,” Feinberg said. “If you have a loud, supportive group of even just 30 people it can make a difference.”

Athletics administrators, coaches, and athletes are optimistic that the rewards program and the new marketing initiative can foster more support among undergraduates and better spotlight the College’s nearly 1,200 student-athletes.

“They want the notoriety and they deserve it,” said Brand. “We have Olympians here.”