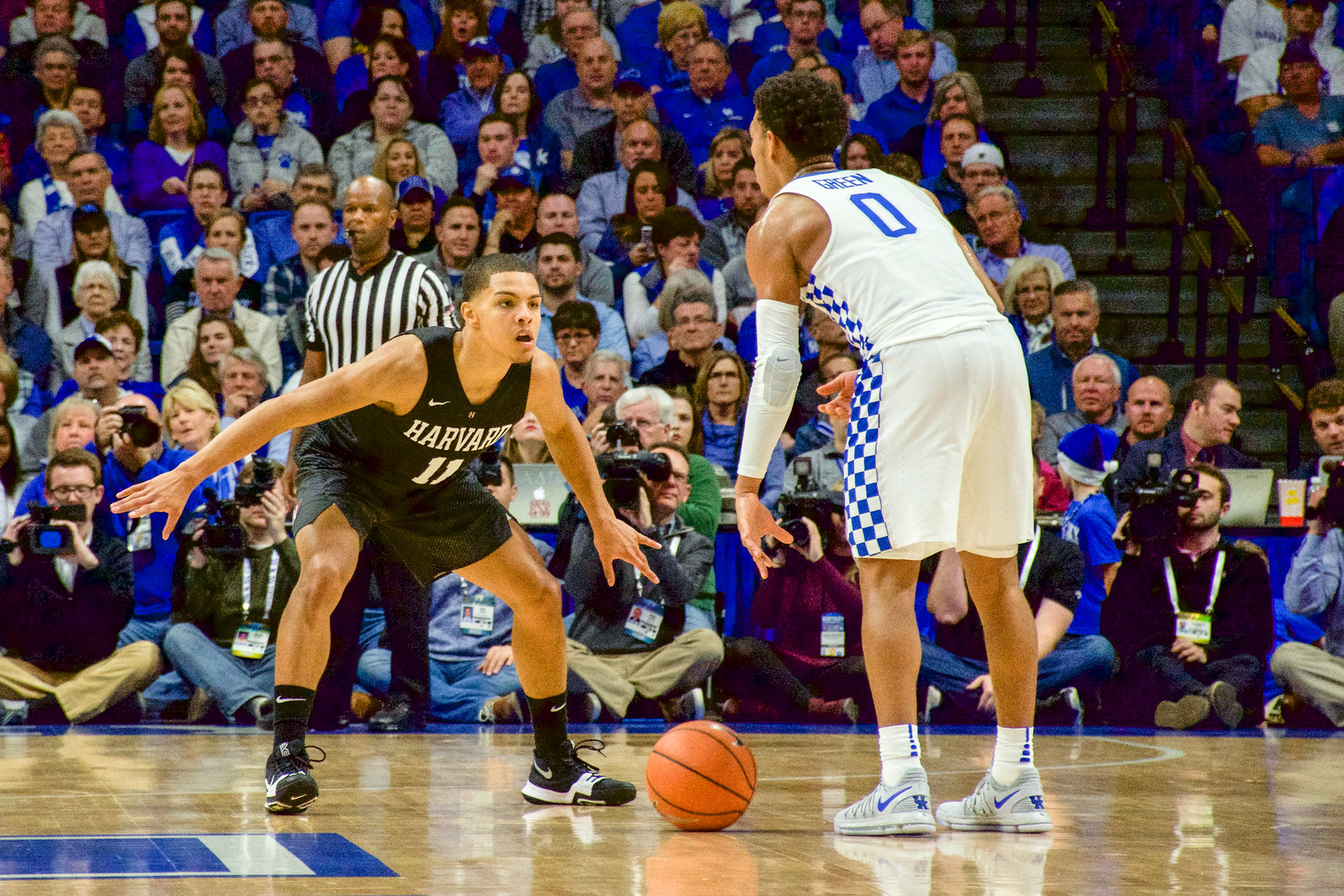 Sophomore guard Bryce Aiken squares up against Kentucky counterpart Quade Green in Saturday's contest against the No. 7 Wildcats. Aiken and the Crimson had Green on lock this weekend, as the Philadelphia native mustered just one basket in his lowest-scoring performance all season. By Sam Danello
By Stephen J. Gleason, Crimson Staff Writer

LEXINGTON, Ky. — A 17-2 run by No. 7 Kentucky midway through the second half lifted the hosts to a 79-70 win over the Harvard men’s basketball team on Saturday afternoon. The stretch blew the roof off an otherwise back-and-forth contest that saw the Crimson at arm’s length for most of the game’s first 26 minutes.

A fast start from the Wildcats put the seventh-ranked team in the country in the driver’s seat early on. However, a series of three-pointers found the bottom of the net for Harvard, getting the Crimson within five by the intermission. Sophomore forward Seth Towns was the catalyst and high-point man for Harvard (3-6), finishing the game with 25 points off the bench, the majority of which came off of triples. Freshmen Hamidou Diallo and Kevin Knox paced Kentucky (7-1), combining for 39 points on 14 made field goals.

LIVING AND DYING BY THE THREE

While missed jumpers and the ensuing long rebounds played a major role in creating a first half deficit, three-pointers would ultimately allow the Crimson to stay competitive for much of the afternoon. Sophomore forward Chris Lewis was bullied inside by the Wildcats’ massive frontline, a reality that also made the paint a no-fly zone for Harvard’s perimeter players. But the Crimson played the hand that it was dealt.

Twenty-one of Harvard’s 37 first half points came from beyond the arc. While typically one of the ball club’s top marksman, Towns had to shoot himself out of a funk on Saturday. Less than 48 hours after registering just two points in 11 minutes against Northeastern, a performance that Harvard coach Tommy Amaker said “really hurt” the Crimson’s chances, Towns was back with a vengeance against the Wildcats. The sophomore converted on his first four tries from long range and was the one player that Kentucky’s defense consistently struggled to contain.

“I was pleased with how Seth came off the bench for us and gave us a shot in the arm,” Amaker said. “I’m hoping that we can use portions of this game to get our team to become a better basketball team.”

While Towns led the charge, freshman forward Danilo Djuricic got in on the action before the break. Playing in front of an estimated 22,922 spectators did not appear to faze the rookie, who hit two three-pointers in the first half, the second of which cut the Wildcat lead to three. The love of the long ball was nothing new for Harvard—the team entered Rupp Arena averaging 22.6 three-pointers per contest. The success, however, was, as the Crimson shot 42.9 percent from long range, a far cry from its 26.5 percent season average before Saturday.

“Give Harvard credit,” Kentucky coach John Calipari said. “They shot the ball. [Amaker] did a great job of putting his people in positions. It was another good game for us to play where another team’s not going to just give us a win. This team needs that.”

Sophomore guard Bryce Aiken did not catch the same bug that struck Towns and Djuricic, however. Aiken converted on just one of his seven attempts from long range. Likewise, junior sharpshooter Corey Johnson made only one of his three attempts on the afternoon.

Harvard’s momentum from beyond the arc did not carry into the second half, a variable that helped spark the decisive Kentucky run. After seven threes in the first half, the Crimson converted on just two triples through the first 13 minutes of the second half. Turnovers plagued Harvard during the stretch, and the Wildcats took advantage. By the time freshman guard Reed Farley ended the three-point drought with a pair of long balls, the game was already out of reach for the visitors.

SWITCHING IT UP DEFENSIVELY

Although Harvard, like most teams in the country, cannot compete with Kentucky’s size and athleticism, it tried to neutralize the Wildcats by giving different looks on the defensive end. Early in the first half, Amaker resorted to a zone defense, a tactic that he rarely employs, to try to stymie a hot start from the hosts.

“We think that once we get ahead we can take our foot off the gas and take it a little easy, but Division-I basketball at this high level, you can’t do that and teams will get back in it,” said Kentucky freshman guard Shai Gilgeous-Alexander.

The move made sense on paper since Kentucky entered the contest having made just 32 three-point attempts all season and had attempted just two triples before the switch. But the tactic also marked a major risk for a team that has struggled to consistently stop opponents using man-to-man defense.

“We were trying to see if we can disrupt rhythm,” Amaker said. “Obviously in an environment like this, they can really get it going and if we can kind of slow it down or create tempo that we want, [they can’t]. We can sometimes do that by changing defenses and it had its moments where it was effective, but no matter what defense you play, they’re just hard to keep off the backboard.”

The ploy paid off in that Kentucky was inefficient from long range. However, the Wildcats feasted on second-chance points and transition buckets.

“I thought they did a tremendous job of [offensive rebounding] and driving in, slashing to the basket and certainly attacking the glass,” Amaker said.

In the five-plus minutes that Amaker employed a zone defense in the first half, Kentucky converted on just one of its five three-point attempts. However, the cold shooting was overshadowed by three offensive rebounds, two layups, and a dunk by the Wildcats. The Crimson only managed to cut the deficit from six points to four during the stretch.

Amaker returned to zone after Lewis trimmed the Kentucky lead to seven with a pair of free throws, but it did not matter.

A turnover fest for the Crimson on the offensive end, headlined by a string of six straight possessions with a giveaway, meant that Kentucky could run like the horses that bring natives of the Bluegrass State so much joy. The Wildcats thrived in transition off Harvard turnovers and rarely needed to get set during its 13-0 run spanning a mere 3:05.

“It got away from us a little bit and I thought that was our inability to maintain composure on the offensive end, which is a little disappointing for us,” Amaker said. “We have to do that in an environment like this.”