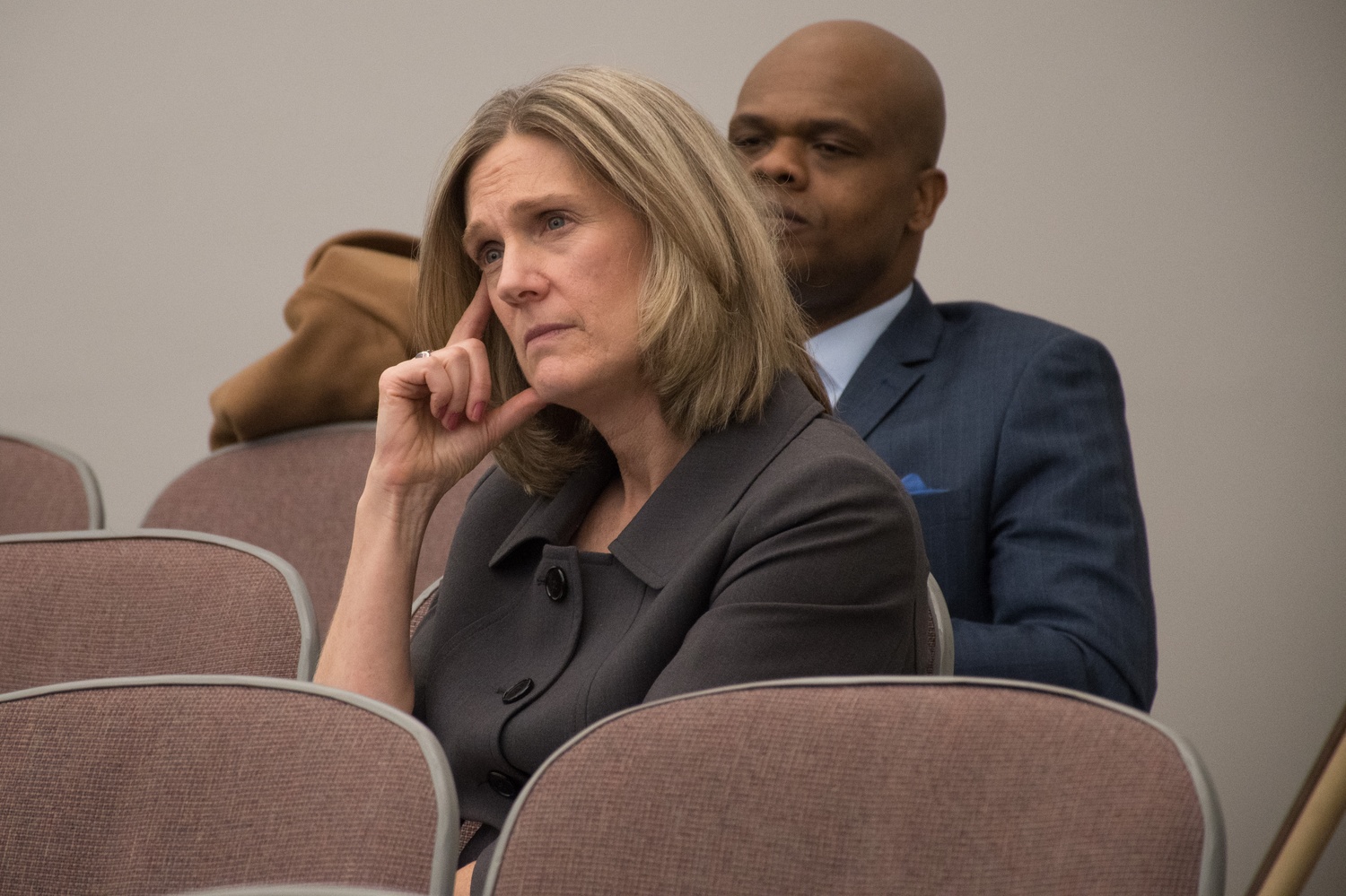 Dean of Students Katherine G. O'Dair, photographed at the last Undergraduate Council general meeting of the semester, said in an interview the Office of Student life will prioritize clarity and reducing undergraduate uncertainty as it develops the implementation plan for social group penalties. By Megan M. Ross
By Kenton K. Shimozaki, Crimson Staff Writer

As it prepares to implement the College's social group penalties, the Office of Student Life will seek to dispel uncertainty and combat a lack of knowledge about the policy among undergraduates, Dean of Students Katherine G. O’Dair said in an interview Monday.

Last week, the Harvard Corporation—the University’s highest governing body—formally voted to maintain the original sanctions on social groups first announced in May 2016. The decision capped over a year of extensive debate on a policy that, starting with the Class of 2021, bars members of single-gender final clubs and Greek organizations from leadership positions in recognized student groups, varsity athletic team captancies, and several prestigious fellowships, such as the Rhodes or Marshall scholarships.

Dean of the College Rakesh Khurana also said last week that the College will finalize a plan to enforce the penalties by the start of next semester and the Office of Student Life will oversee implementation.

O’Dair, who leads the Office of Student Life, said that the plan for implementing the penalties is still under discussion, but that her office is receptive to further student feedback.

“We are committed to transparency, our efforts are going to be geared toward clarity of the policy,” O’Dair said. “We want to reduce student anxiety.”

O’Dair added that students will be involved in the implementation, but “what that exactly looks like is to be determined,” she said.

While the policy technically took effect when the Class of 2021 came to campus in August, the Office of Student Life has yet to enforce the penalties on members of single-gender final clubs or Greek organizations. The office has not expected recognized student organizations to enforce the policy’s restrictions up to this point, according to O’Dair.

She echoed Khurana’s comments that implementation of the policy will be guided by two reports produced by committees tasked with reviewing the penalties, as well as a letter issued by University President Drew G. Faust and Corporation Senior Fellow William F. Lee ’72, which announced the results of the Corporation’s vote. O’Dair served on both these committees shortly after arriving to the College in August 2016.

But it is still unclear which recommendations from the committees’ reports will ultimately be implemented.

“We’re still in the process of determining the process for the next steps on implementation and once it’s ready to share, we’ll announce that,” she said.

The letter from Faust and Lee also noted that the Committee on Student Life—a body that includes Undergraduate Council representatives, House Faculty Deans, and OSL administrators—will be tasked with providing interim reports to the Faculty of Arts and Sciences and other University administrators.

O’Dair, who also chairs the Committee on Student Life, said the committee will assess implementation, the impact on extracurricular and social life, and their charge to grant recognition to student groups.

“We have been doing work prior to the policy announcement with groups who are interested in exploring what it looks like to become gender-inclusive, so that work will continue,” O’Dair said.