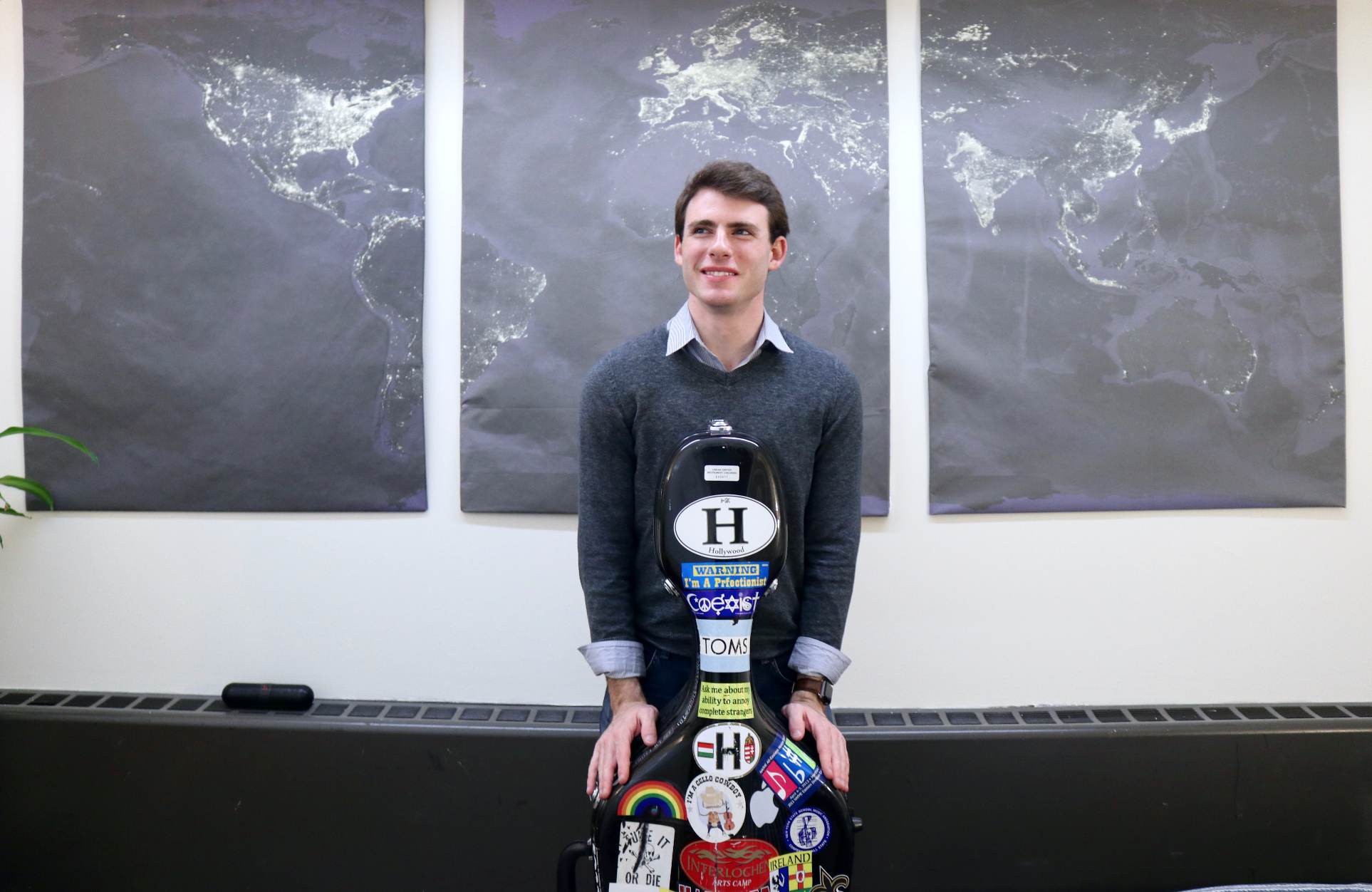 If you were to walk into the dorm room of Aron I. Szanto ’18 (“The Z is silent.”), you would see a neat trapezoid: one wall covered in a composite image of the earth at night, and on another an old map of Hungary, his father’s homeland. On your left would be a giant whiteboard covered in puzzling diagrams, like something off a poster for “A Beautiful Mind.” These equations are called “belief propagation algorithms,” and they constitute the basis of Szanto’s thesis: devising an algorithm to identify fake news based on social media sharing patterns.

“Say I have a secret,” says Szanto, an Applied Mathematics concentrator in Mather House and a Masters candidate in Computer Science. “I tell you the secret, and you tell someone else, [and] they tell someone else. If you were to track that little bit of information as it spreads, it would kind of look like a line that goes from me to you and me to your friend. You would see little nodes in a network light up.”

The propagation pattern of a secret, he says, is different from, say, the announcement of a friend’s engagement on Facebook, and radically different from a bombshell political allegation. A fake news story as incredulous as Pizzagate—the viral conspiracy alleging Hillary Clinton’s involvement in a human-trafficking ring—would not be merely seen and liked among a small circle. “You’re gonna share it,” Szanto says. “The fact that you can deduce some of the underlying information from just the shape of the information diffusion means that we might be able to tell what’s real and what’s fake before it’s widely fact checked.” 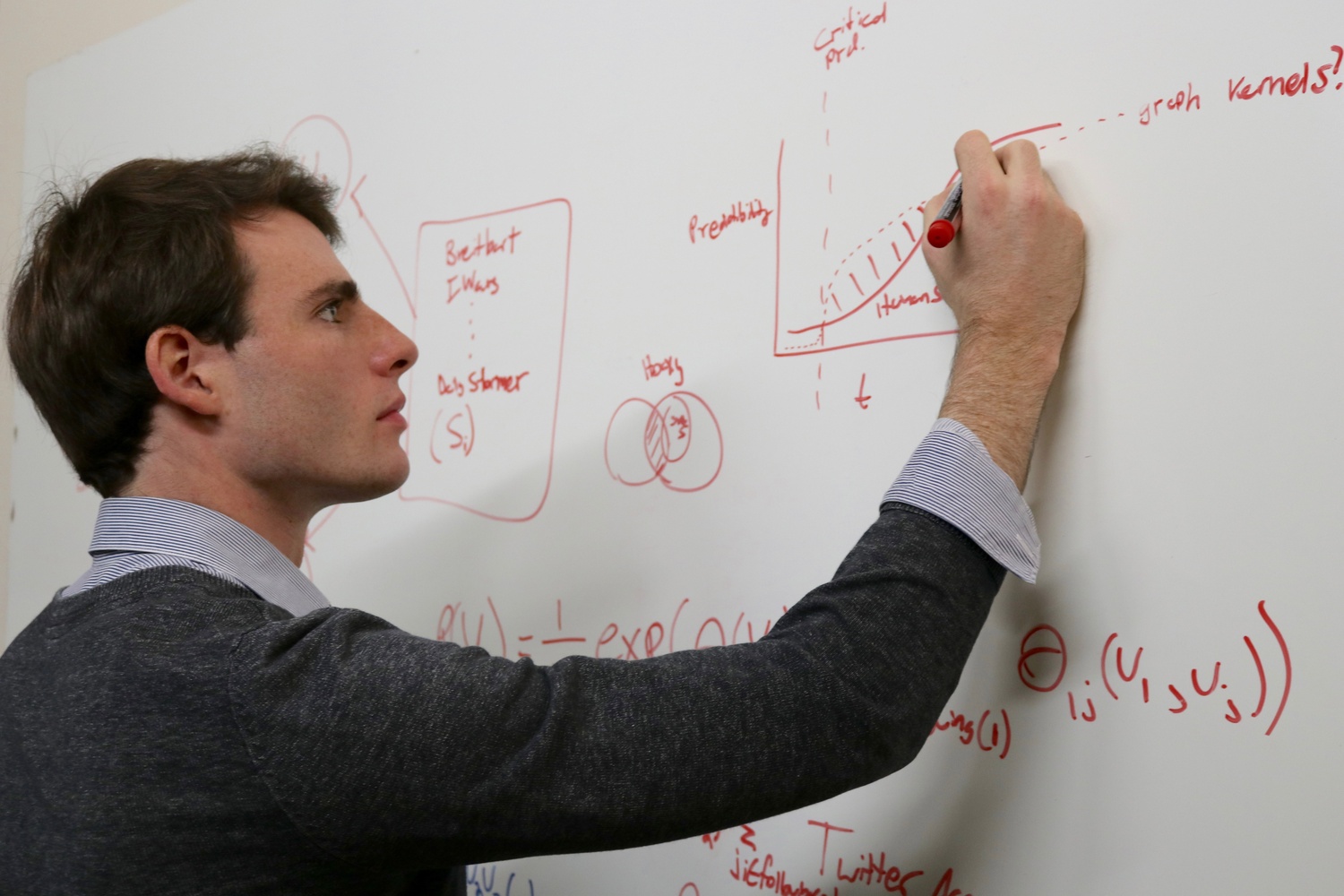 The idea for his thesis emerged in the days after the 2016 election. The very next morning, he made a list of his skills that could be put to use in the Trump era. “The things that immediately came to mind,” he says, were, “I can code and I know how to organize people who code.” In the days that followed, he organized computer science students at Harvard and MIT in teams to work on various projects, which included analyzing the provenance of fake news stories that influenced the election.

But Szanto has many talents besides coding: He is a classically trained cellist, avid chef, and frisbee-player on the Harvard men’s team.

He also serves as president of the Applied Math Society at a time when the number of concentrators is particularly high. “We immediately had all these questions and problems to deal with, like how to increase the number of underrepresented students in this department, how do we protect against the huge number and proportion of students that drop out of [Math] 21a,” Szanto says.

His various research interests across security, political science, and artificial intelligence mirror those of one of his idols, early computer scientist and Turing Test inventor Alan Turing. “He operated in areas of computer science that are so widely different as we see it now,” Szanto says. “To him, they were all part of the same cohesive whole.”

For now, his eyes are trained on his dizzying network of lights. “Everyday I’m reading things like Breitbart and The Daily Stormer, because this is what the thesis involves,” he says. “It’s getting me fired up to fight hard in the next election and make technology that will help us out in the next election.”

He worries, though, that technology will not be enough to sway opinion. A Yale University study released in September found that there was only a 3.7 percent difference in the perceived accuracy of news stories tagged as disputed by fact-checkers. “Even if we can build a magical machine intelligence that could deduce whether a story was real or fake,” Szanto says, “it doesn’t mean anything unless you can communicate the information to people in a relevant way.”