Armed with a list of 39 policy proposals, Zhang and Boucher say they’re ready to run the Undergraduate Council together.
By Ahab Chopra and Simone C. Chu 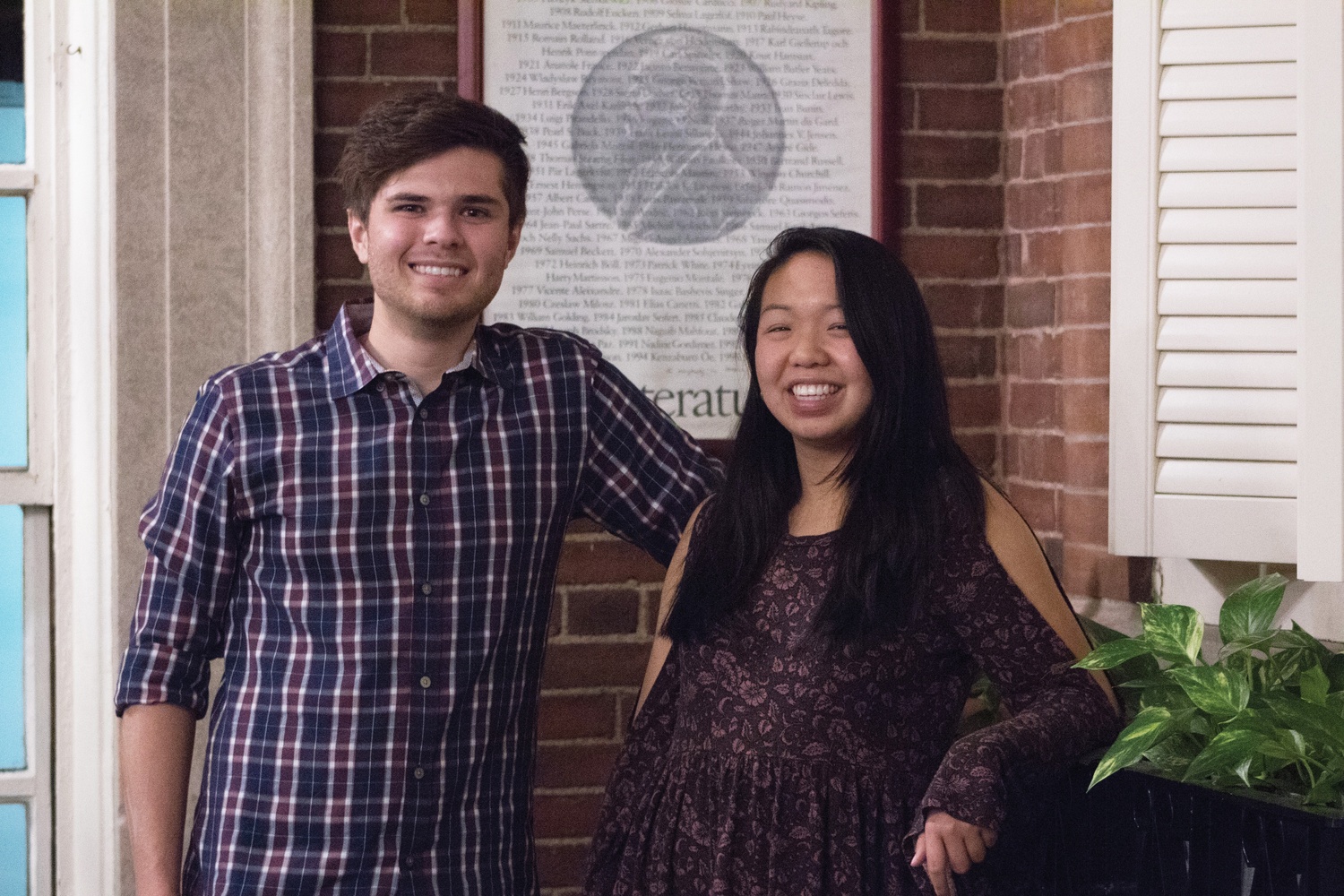 At first glance, Catherine L. Zhang ’19 and her running mate Nicholas D. Boucher ’19 have had very different college experiences. Zhang concentrates in Psychology and has been involved in campus events from Freshman Formal to Housing Day celebrations. Boucher studies Computer Science and has won awards for his mobile application development. Zhang lives in the Quad; Boucher’s residence is clear across campus in the concrete expanse of Mather House.

Both candidates, though, have two years experience serving on Harvard’s Undergraduate Council under their belts. And, armed with a list of 39 policy proposals, they say they’re ready to run the Council together.

Zhang, who has been on the UC since her freshman fall, currently represents Cabot House on the Council. Boucher, who joined the UC the spring of his freshman year, is now a Mather House Representative as well as the Council’s Treasurer.

Boucher said he clearly remembers the first time he met Zhang during a UC meeting.

“I remember walking into the first meeting, and there being one particular representative who was so much louder than all the rest,” Boucher said. “And I thought, ‘There’s somebody I want to be friends with!’”

Two years later, the pair finds themselves running as a ticket for UC president and vice president.

Though they bring different backgrounds and specialties to the table, Zhang said she thinks their differences are “complementary.”

Though their approaches may be different, Zhang said, “our values are very, very similar.” Those values—transparency, staying focused on issues, and realistic goal-setting—have shaped their campaign policies, from the establishment of a multicultural center to a new “matchmaker” grant that would allow different student organizations to connect.

Zhang also said she likes to think big. She mentioned her love for “event planning” and “large scale events.” As a member of the First Year Social Committee, she helped plan and run Haunted Hall, the Freshmen Formal, and the Housing Day Eve Carnival. Later, as a sophomore, she also helped plan the sophomore declaration event.

Zhang also previously served as chair of the Freshman Class Committee during her sophomore year.

“A big part of my work here at Harvard as a whole has been to empower and support freshmen,” Zhang said. “I love freshmen.”

While Zhang has mostly focused outward on changes to student life, Boucher has largely focused on how to make the UC itself more efficient. This February, he created Nova, a new online grant application system for the UC’s Finance Committee, on which Boucher serves.

“[Nova] is a technical system which provides online tracking for every grant application submitted to the UC,” he said. “[Student organizations] are able to track their grant just like they are able to track, say, a FedEx package online.”

But in addition to tracking the progress of funding, Boucher said his program has also saved the UC money by helping identify previous inefficiencies in the grant process.

“This whole summer, every night, that’s what I was doing,” Boucher said. “To watch that play out in real life has been unbelievable because the good that comes out of that makes all the hours worth it.”

Boucher also praised Zhang’s ability to encourage others on the Council to accomplish their goals.

“More so than anyone I’ve seen in the Council in the past two and half years, Cat is a motivating force,” Boucher said. “Yes, she’s done a lot, but on top of that, she’s the reason why a lot of people have done a lot.”

Zhang and Boucher emphasized the importance of transparency and communication between the UC and the student body at large.

Boucher noted that information about the UC’s actions is mostly disseminated by “third-party” groups like The Crimson.

“That’s the Council falling short,” he said. “It should be our civic responsibility to be reporting back continuously to the student body about what we’re doing.”

In order to make the UC’s actions more transparent and easily accessible next year, Zhang and Boucher said they would add progress bars to the UC website—like the ones currently used on the UC’s Nova platform. Zhang and Boucher hope that this way, students and student organizations would easily be able to track the progress the Council makes on its priorities.

“If we make a promise, it’s going on that list. And if we don’t do it, you should call us out on it,” Boucher said.

The list so far contains 39 goals, including advocating for textbook accessibility and hiring more full-time mental health counselors. Zhang said that although accomplishing all 39 goals in a single year would be unrealistic, but that their combined experience would also help their efficiency.

“We’ll have to pick a few to immediately start on because some are short-term,” Zhang said. “We could institute [them] ASAP.”

Other priorities, she said, would require more planning and meetings with administrators. But even for longer-term priorities, Zhang said she and Boucher would continue to inform students of the Council’s progress.

Several of Zhang and Boucher’s proposals for mental health and sexual assault prevention include partnerships with different organizations at Harvard. Zhang said the duo have begun discussions with Our Harvard Can Do Better, an anti-sexual assault advocacy organization on campus.

Zhang and Boucher also emphasized policies for improving inter-student relations and inclusion. Chief among them is their support for the creation of a multicultural center for students.

Boucher defined the idea for the center as “a physical space that exists on campus where students from any background” to find personal and academic resources. He also said it would serve as a “social space.”

Both Zhang and Boucher noted a prevalence of exclusive social spaces on campus and said they want to create a space where anyone could feel comfortable.

“What we imagine is a place somewhere, say in Harvard Square, somewhere proximate to the Yard in general, where there could be social events on Friday and Saturday nights and during the day,” Boucher said.

Although the idea for a multicultural center isn’t new, Zhang and Boucher said they want to make it a priority this year.

Zhang and Boucher said they support the general idea of the sanctions, though they have some concerns about the administration’s implementation.

“The idea, the spirit of the legislation, we support,” Boucher said. “The actual execution has been really poor… It has been a flawed process, and I think if it was to be implemented as proposed now… people are going to get hurt in the process.”

To improve social life on campus, Zhang and Boucher said they would seek to create more inclusive spaces for students to spend time and meet people.

“If you're going to take something away, you need to build something up too so that you can supplement where social life is in an interim period,” Zhang said.

In addition to the multicultural center, the pair also wants to foster inter-student collaboration with a new “matchmaker grant.” The grant would provide funding to different student organizations—like a cultural group and a pre-professional organization—to have conversations together over food.

Zhang and Boucher also hope to facilitate student-faculty relationships in a more casual, low-pressure manner by offering regular dinners with faculty members in the Houses.

Zhang said that while existing programs like Classroom to Table put “the onus on students to make that connection with [faculty],” their new initiative would make the process lower-pressure by making it a lottery system. This would also allow students to interact “with faculty whom [they] might not have any interaction with before.”

In addition to working on initiatives, the UC president and vice president meet regularly with members of the university’s central administration, and would therefore work closely with the new University president, set to take office next year. Zhang and Boucher said that they hope that the new president is able to strike a balance in his or her duties both on campus and in the world.

“I hope whoever is in the next position will have that same dedication Faust had, but I also hope he or she will be able to sit down in a d-hall and talk with undergrad students or talk with the Undergraduate Council,” Boucher said.