If elected, Agbafe and Bervell say they plan to develop a platform for “shaping” Harvard based on student opinion, “filling” out Harvard’s existing programs, and “baking,” or enacting policies they see as vital to improving students’ quality of life.
By Molly C. McCafferty and Michelle Y. Raji 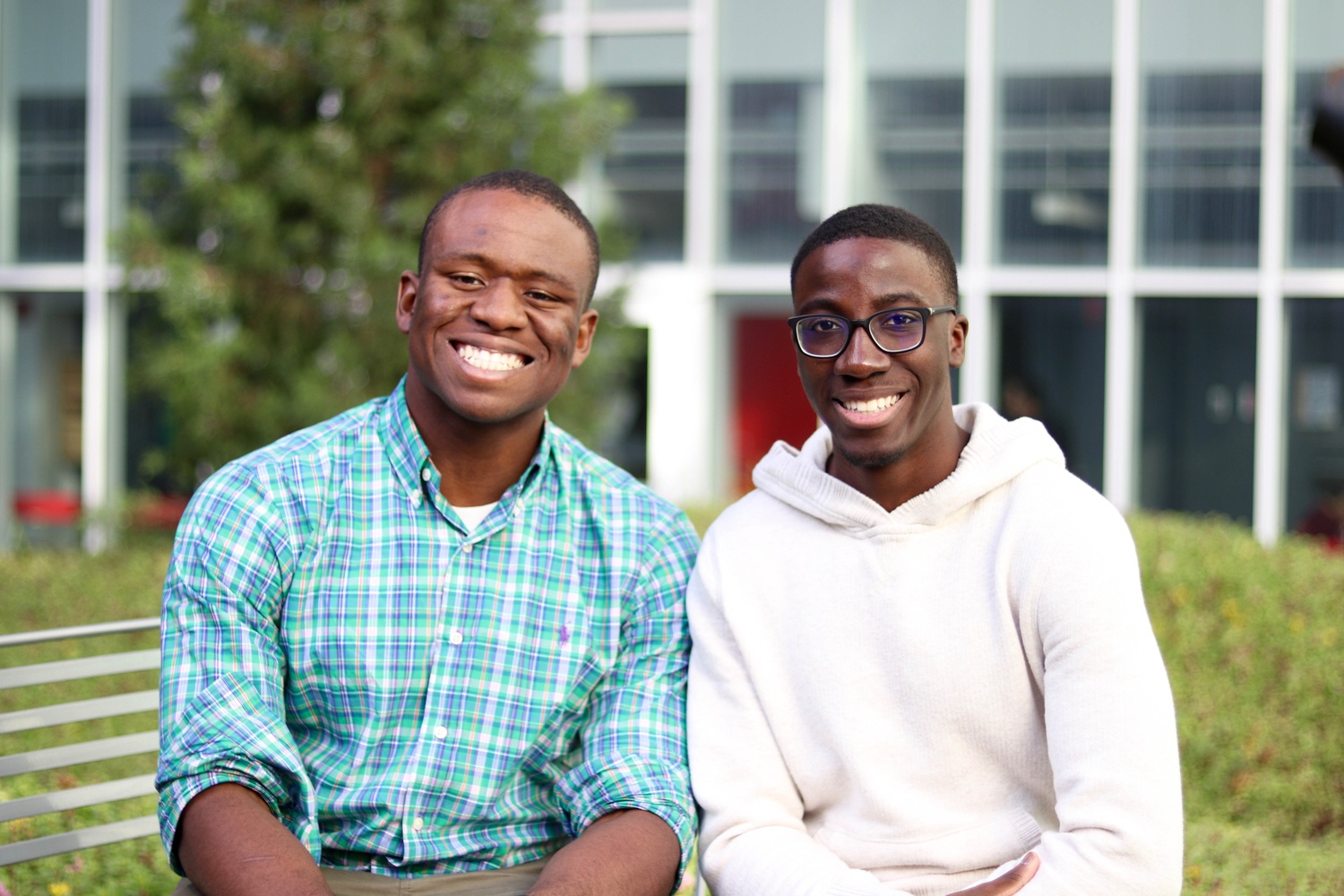 Victor C. Agbafe ’19 and Michael K. Bervell ’19 do not look much like bakers.

Yet, if campaign literature distributed across campus is any evidence, the two contend to be just that: according to their slogan, their campaign to lead the Undergraduate Council will offer each Harvard student “your slice of the pie.”

Agbafe and Bervell met during their senior year of high school when they both received the Coca-Cola Scholarship, travelling to Atlanta for a winners’ conference. Agbafe, a Dunster House UC representative and the ticket’s presidential candidate, got in touch with Bervell—a Kirkland House resident and the ticket’s candidate for vice president—online.

As fate would have it, they were soon placed in the same freshman entryway and quickly became friends.

Though they now live in different Houses, concentrate in different subjects, and belong to different extracurricular groups, according to Agbafe, the two remained in contact, and they continued to cross paths until they decided to enter the race together.

“Some of our interests and passions in service would bring us together,” Agbafe said.

Their interest in student outreach is evident in the pair’s campus involvement: Agbafe, a Government concentrator, has represented his classmates on the UC since his freshman year, and Bervell, who concentrates in Philosophy, is involved in the Harvard Alumni Association and the Franklin Fellowship, a personal-development-based organization. Bervell is also an inactive Crimson editor.

If elected, Agbafe and Bervell say they plan to develop a comprehensive platform for “shaping” Harvard based on student opinion, “filling” out Harvard’s existing programs, and “baking,” or enacting policies they see as vital to improving students’ quality of life.

In creating their policy platform, Agbafe and Bervell said they tried to come up with plans that are concretely actionable during a one-year term. The pair said that the most feasible task they plan to tackle upon entering office is to set up a social fund for student organizations.

Sponsored by alumni, startups, and larger companies, this $250,000 fund would be available for smaller student groups with low budgets to hold social events for members. The fund would also provide all undergraduates with a base Crimson Cash stipend, similar to the $65 per semester each student receives in BoardPlus. Agbafe and Bervell have yet to specify the amount each student would be given.

“It would make sense to have free printing, to have free laundry, and to be able to go into the Square and go to cool restaurants with your friends,” said Bervell.

Bervell said this proposal is the “number one” priority on their platform.

“Being able to raise a lot of money that we can give to the student organizations that don’t have money seems like a no brainer, and I’m surprised it hasn’t happened yet,” he said.

The two said they do not support administration's penalties on members on unrecognized single-gender social organizations—which, starting with this year’s freshman class, bar members of these groups from holding certain fellowships and on-campus leadership positions.

Instead, Agbafe and Bervell said their proposed social fund ultimately looks to serve as an alternative to the penalties and give student groups equal resources to stimulate social life for those who choose not to participate in final clubs and Greek organizations.

They also tout their different social experiences at Harvard—Bervell is in the Owl Club, while Agbafe is not a member of any unrecognized social groups—as an asset to their ticket.

Agbafe and Bervell say they have formed these social policies through researching social life at peer institutions and conversations with student group leaders across campus, including both recognized and unrecognized groups.

“We’ve been meeting with the boards of particularly cultural organizations, women’s groups to get feedback on our ideas,” Agbafe said. “We’ve also been meeting with USGSOs. We recognize that they are part of the Harvard community and we want to hear their input.”

It seems as if their outreach has paid off: So far the Black Men’s Forum, Caribbean Club, Colombian Student Association, and Native Americans at Harvard College have endorsed Agbafe and Bervell.

Engaging in group dialogue is typical of the pair’s personalities and leadership style, according to friends and classmates. One such friend, Caroline Teicher ’19, said that one of Bervell’s strongest character traits is his skill at both providing and responding to feedback.

“He definitely values everything that everyone says,” said Teicher.

“I think he’s the textbook definition of an active listener: someone who’s really enthusiastic about hearing people’s point of views just for the sake of expanding his own perspective,” she said.

Agbafe and Bervell said that second on their list of top priorities is working to get electronic dispensers of menstrual hygiene products and contraceptives installed across campus. As explained in their policy platform, the candidates feel that availability of these products across campus is lacking.

They also said that socio-economic barriers may prevent students from accessing feminine hygiene products or contraception; for this reason, they intend to make all products available in the dispensers free of charge.

“We have no excuse as an institution not to provide those products for our students,” Agbafe said. “Those products, they’re—it’s not just something that’s a luxury. It’s a human right, and that’s something that we definitely want to prioritize and push the administration to work with us on.”

Installing dispensers isn’t the only proposal the two have to promote physical health on campus. They also say they hope to support and provide resources for students who have experienced sexual assault.

Bervell said that that the candid conversations they have had with students who have been sexually assaulted have been instrumental in shaping their views on this issue.

“As two cisgender, heterosexual males, we’re never going to know what it’s like to be disproportionately sexually victimized,” Agbafe said, adding he thinks it is important to bring victims’ voices to light.

Agbafe and Bervell said their third area of focus will be installing a variety of eco-friendly resources to make student life more sustainable.

“Frankly, environmental justice is not brought up as a campaign ticket point at all at Harvard,” Bervell said. He and Agbafe plan to install composting stations next to every dining hall tray return.

Agbafe and Bervell said that students often fail to compost their waste, and that they hope to make the practice standard. They also want to make sure students understand why living sustainably and composting are important.

“Just to start that discussion for the next five years, the next ten years, especially because it’s becoming a bigger issue, is something that we want to be proactive about,” said Bervell.

They also want to start an affordable bike-sharing program for students. Their desire to increase sustainable living on campus is complemented with a social-fund-related initiative to subsidize costs for plants in students’ dorm rooms.

“It might be a free cactus fund because knowing how busy students are they may forget to water the plants,” said Bervell.

All in all, the duo’s pie-themed platform is reflected in the way they see Harvard. Their platform’s shape is also a result of what they see as their commitment to producing tangible results.

“There’s a lot of rhetoric, but not many action plans, actual steps, identifying what you want to solve,” said Agbafe. “This is what you can hold us accountable to. If we don’t, it is kind of a collaborative effort.”

They also want to be in constant communication not only with UC representatives, but their constituents themselves. A significant part of their platform is dedicated to communicating with Harvard students with digital polling and town halls.

“An institution like Harvard operates on a stakeholder kind of system,” said Agbafe. “Students, which, we think, are the biggest stakeholders on campus, can have the largest voice. Ideally use that to mobilize change in the way that the administration allocates resources.”