Notebook: Football Rights the Ship With Trouncing of Lafayette 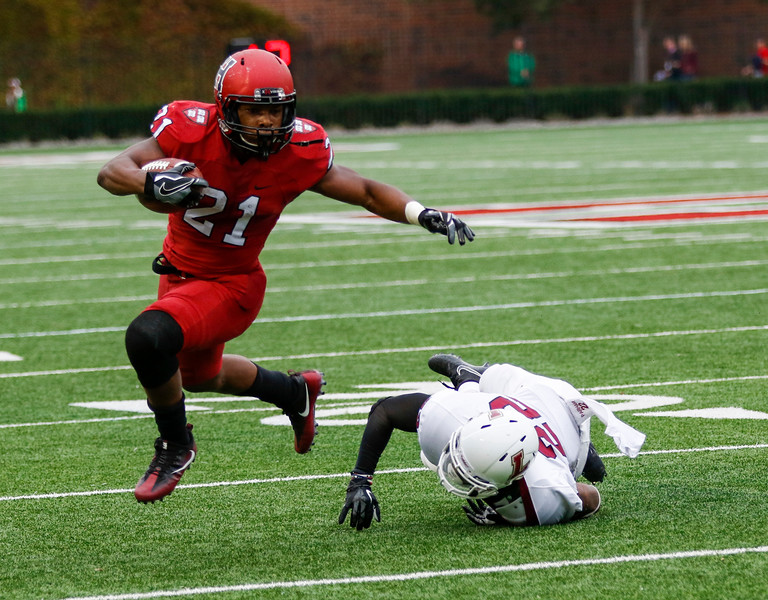 Behind strong performances from junior running back Charlie Booker, the special teams unit, and the defensive line, the Crimson righted the ship with a 38-10 win against Lafayette.
By Sam Danello

After losing to Cornell last week, Harvard football needed to make a statement. Against Lafayette (2-5, 2-0 Patriot) on Saturday, the Crimson did just that.

“We challenged our kids, and they responded,” Harvard coach Tim Murphy said. “They have a lot of pride and a lot of character—they responded.”

6A HAS IT HIS WAY

Junior running back Charlie Booker has been carrying teams since 2014, when he led Cypress Ranch High School to the Texas state title game.

The Mustangs started 1-2 that year, but Booker captained the 6A program to 12 consecutive wins. The run ended in AT&T Stadium, when Cypress Ranch fell despite 115 rushing yards and from Booker.

While the Mustangs lost the game, Booker won something else—Murphy’s attention.

Last Saturday, the 5’9” Booker delivered another highlight performance, pummeling Lafayette for 159 yards and a score on 23 carries. As a team, the Crimson rushed for 296 yards.

Freshman running back Aaron Shampklin complemented Booker with 82 yards on 22 carriers. This two-back strategy has worked all season. Booker is averaging 99 yards per game, while Shampklin adds 49. The two have combined for seven touchdowns and one fumble.

On Saturday, rushing productivity extended beyond the backs. As a high school senior, quarterback Jake Smith ran for 24 touchdowns on 9.6 yards per carry. Now a Harvard freshman, Smith notched his first college score in the fourth quarter.

Early in the first half, the freshman had watched junior wide receiver Justice Shelton-Mosley race 85 yards for a punt-return touchdown. Now, with the second half about to start, Kordenbrock decided to loft the ball away from Shelton-Mosley.

Special teams and penalties. Penalties and special teams. Coaches harp on these metrics as keys to success. In 2016, the Crimson struggled on both accounts, posting the lowest kickoff return average (15.2 yards) and most penalties per game (7.7) among Ivy League teams.

Last Saturday told a different story. Harvard didn’t see a flag until midway through the third quarter. And the special teams racked up 14 points thanks to Scott and Shelton-Mosley.

Shelton-Mosley’s touchdown came three minutes into play, when he fielded a punt at the left hash and swept right. Junior wide receiver Henry Taylor cleared out the kicker, and Shelton-Mosley sprinted past the goal line.

LINEBACKERS BACK IN LINE

If the Crimson ever runs out of wide receivers, Murphy might want to consider linebacker Luke Hutton. Last Saturday, the senior nearly came up with two exceptional interceptions.

The first came on a crossing route. Hutton dove, somersaulted, and seemed to roll the ball over his cleat. Referees ruled otherwise.

The second came when freshman quarterback Sean O’Malley tried to heave the ball out of bounds. Hutton raced to the sidelines and tried to drag his feet. Again, referees ruled otherwise.

Remarkably, the senior got his hands on the ball a third time when he batted down a pass in the third quarter. Put simply, Hutton was everywhere.

The most impactful addition has been junior linebacker Charlie Walker, who missed all 2016 with a major leg injury. In the past two weeks, Walker has racked up 17 tackles. The Keller, Texas, native hits with ferocity and blankets receivers in the pass game.

Along with teammates, Walker approached the Leopards game with renewed fire after giving up 233 rushing yards to the Big Red.

“We were almost embarrassed…to put [the Cornell game] on film and send that to other teams as if we allow others to run down our throat,” Walker said. “It was nice to come out and show everybody that we’re not going to accept something like that.”