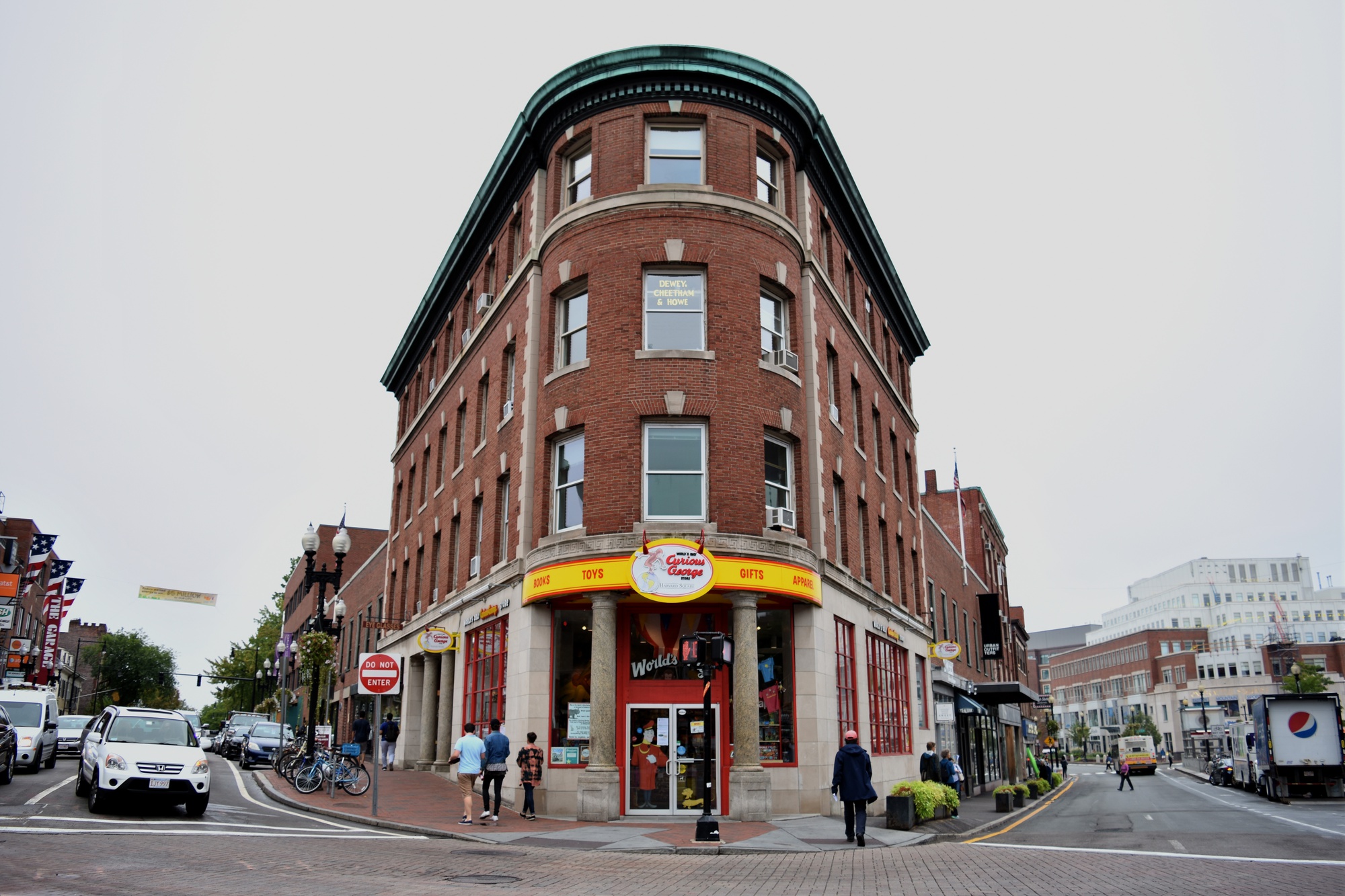 A number of Harvard Square retailers including the Curious George store and Urban Outfitters face likely eviction, as the owner of their iconic building seeks to transform it into a pedestrian mall.

In preliminary renderings submitted to the Cambridge Historical Commission, Equity One, the current owner of the centrally-located building at the corner of JFK and Brattle Street, proposes a two-floor addition to the back of the building, as well as a complete redesign of the interior, opening up floor space for new tenants and turning the space into a small mall. 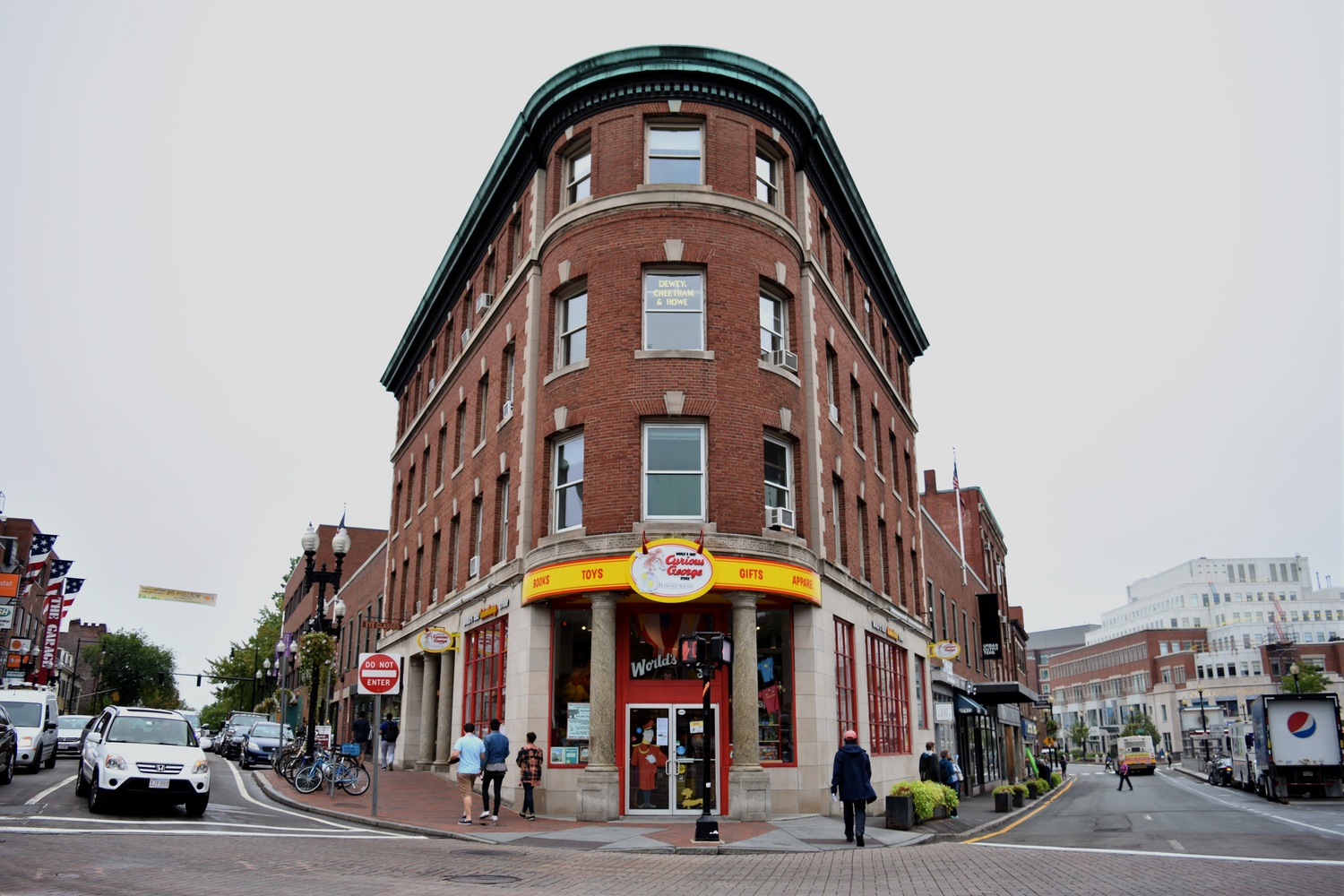 Pedestrians walk by the first Curious George store, a well-known spot in Harvard Square that is now closing down business. By Tim C. Devine

The proposal will have a public hearing this Thursday, when the Historical Commission is set to meet with Equity One representatives and community members at City Hall at 6 p.m. to discuss the plans.

In the meantime, city officials and tenants are scrambling to learn what the plans may mean for the future of Harvard Square. Business owners like Susan Miller-Havens, owner of the Miller-Havens Fine Art Studio located in the building alongside Brattle Street, said tenants would be forced out should the proposal be approved.

“We’re just all going to get evicted. None of us are going to be able to afford the rent,” Miller-Havens said. “It’s a very disruptive thing, what these people are doing.”

Equity One, a real estate investment firm based in Miami and New York, purchased the building last October for over $80 million. Their website calls the building “The Harvard Collection” and highlights the “strong demographics” of Harvard Square, including the over 500,000 person “annual average daily traffic” that passes through the square. The company did not respond to multiple requests for comment.

“The developers, who are from out of town, have made their design to maximize profit within their purchase,” he said. “Not understanding Harvard Square, I can visualize why they did that.”

One unique tenant in the building at risk of eviction is the Harvard Square Business Association, which has its offices on the third floor. Denise A. Jillson, the association’s executive director, said tenants have known about the potential for changes for almost a year now.

“Of course we’re very concerned about all the tenants of the building, many of whom are members of the Harvard Square Business Association,” Jillson said. “I’m not hopeful that we can stay there. It would be delightful if we could. It’s been home to us for many years.”

City Councillor Jan Devereux, who spoke with building tenants throughout the weekend, worried the potential changes would alter the current first floor storefronts and more broadly, the character of the Square.

“I very much don’t want to see it turn into a mall that could be anywhere where you have big chain stores and no connection to the sidewalk,” Devereux said. “To me the plan that is under consideration right now is not the result of any thoughtful conversation about the sustainability of a community but is more about how to harvest the highest rent possible.”

Hugh A. Russell ’64, a former chair of the Cambridge Planning Board and founder of Russell, Scott, Steedle & Capone architects, a building tenant, said he was unsure about the thought that went into the renderings.

“They’re schematic level drawings so they haven’t thought out in detail what they’re really going to do. That’s what it looks like to me as an architect,” Russell said. “Second floor retail is usually pretty difficult to sustain.”

According to Russell, the Thursday hearing is just the first step in a process that may take months.

Despite looming eviction, Jillson noted some of the improvements that the renovation would bring to the Square, including the potential for more businesses on the new floors.

“Increased density is a good thing within the rules and regulations,” Jillson said. “Certainly increasing the capacity above Urban Outfitters is a good thing.”

The hearing comes at a time of rapid construction and seemingly overnight closures for Harvard Square. The 2015-2016 school year alone saw multiple business closures, and the beginning of construction on the Smith Campus Center. Last week, Cambridge residents debated the city-approved renovations of the historic Out of Town News Kiosk.

Carlone and Devereux both agreed that the City Council only has tangential sway over projects like Equity One’s proposal, as the City Council controls zoning through the Zoning and Ordinance Committee. However it is unlikely that the process will reach that committee or the Planning Board anytime soon.

“Equity One has their rights as a property owner and we support their right to petition the city,” Jillson said. “The great thing about Cambridge is that there are lots of opinions. And the city is very good about making sure those opinions are heard.”