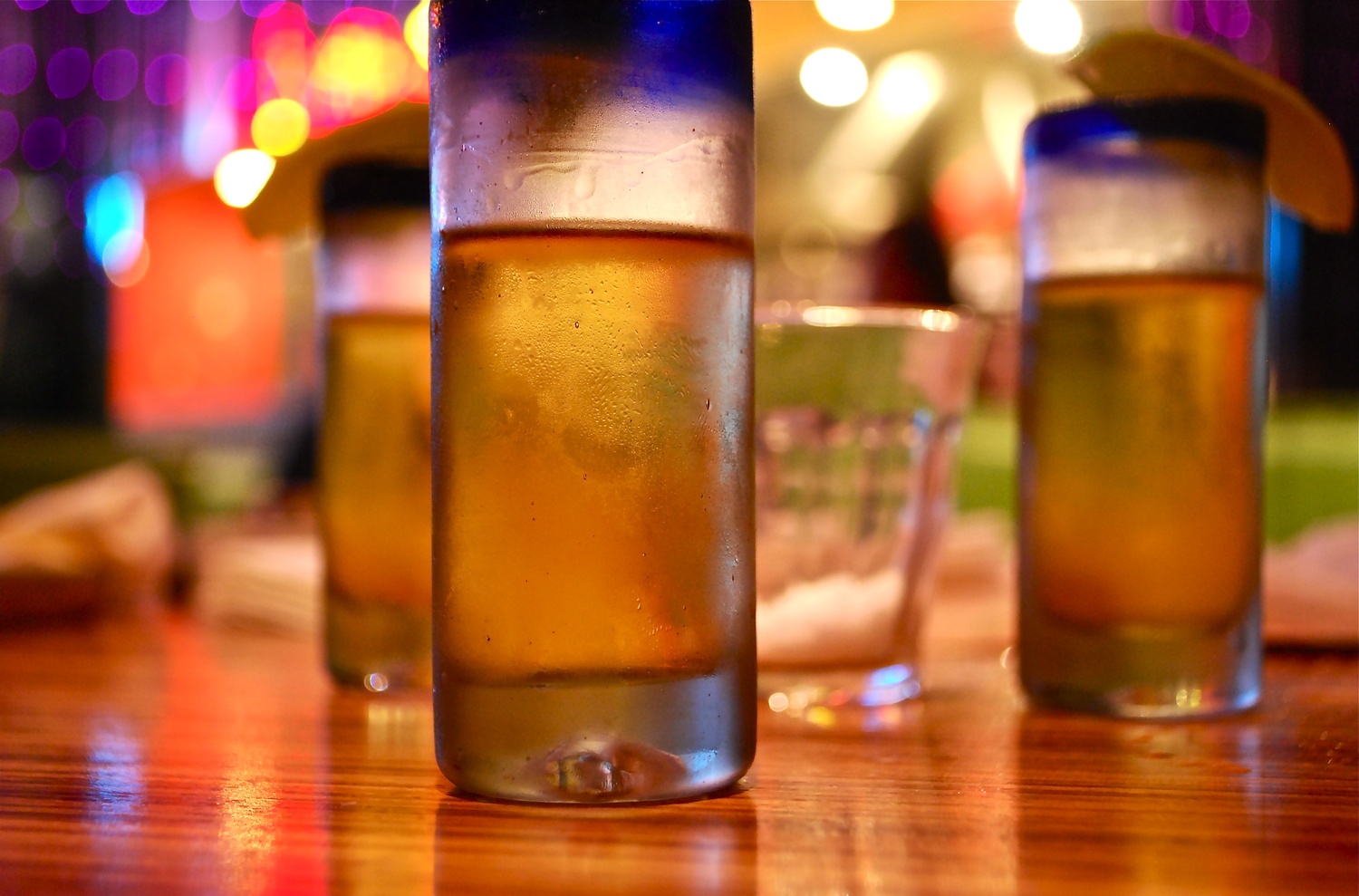 We at “Ben and Andrew” are eternally grateful for the enormous outpouring of support we’ve received since we started writing our hit column, “Ben and Andrew,” last spring. Unfortunately, due to creative differences, “Ben and Andrew” has decided to dissolve. Luckily, we’re releasing a brand new column, “Andrew ‘n’ Ben”, that we think you’re going to love. We encourage you to follow along, and as always, to revisit your favorite “Ben and Andrews” from the archives.
By Andrew W. Badinelli and Ben G. Cort

Daedalus was the bar on our list closest to Mather, so we started there. It was about 9:30 p.m.

Daedalus has a nice interior and a good vibe, I think. I say “I think” because I couldn’t really tell or hear through the throng of people that had flooded the upper deck and bar. Judging by their nametags, we had stumbled into some kind of company social.

I had left my pack of nametags back in our room, so we were not prepared to blend in at all. The night being very young, we decided to skip Daedalus and loop back around later when we stumbled back to Mather.

Despite my roommates complaining that the food at Grendel’s tastes microwaved, I’ve enjoyed eating there in the past and was looking forward to trying their drinks. The outdoor patio was empty when we arrived, so we figured we would ask the bartender if it was cool if we camped out there with our drinks.

It was not cool. In fact, I think the bartender used the word “illegal” when we asked. Also, Grendel’s food tastes microwaved.

Strike two. We abandoned ship and hopped over to our next location, our morale lowering.

When we got to Charlie’s, we handed our IDs to the bouncer and he waved us in. Unfortunately for the Italian man in line with us, Charlie’s did not accept any of his four different Italian IDs, including his passport. Let that be a lesson to all of you Italian ex-pats.

To be clear, though, this wasn’t some bright-eyed youngster trying to slip one over on Charlie’s. I understand the need to ID everyone, but judging from the bags under his eyes and his slightly greying hair, this man was clearly at least 35. And who’s faking passports to get into bars? So shout out to you, middle-aged Italian man. Let us tell you what you missed.

Charlie’s was actually a solid move. The drinks were strong and relatively cheap, the vibe was busy but not packed, and our waitress, though awkward as hell, was trying her best. One table was on fire—no one was roasting marshmallows, but it was still cool. And though we saw a mouse, his chill vibe said “drinking companion” and not “revolting vermin.”

I had no idea that The Sinclair was also a restaurant in addition to being a weirdly packed music venue, so I was pretty interested in seeing what they had to offer. It certainly was the classiest joint we visited that night, although that aesthetic came at the cost of a price bump.

We balked at the high prices on the specialty cocktail menu and ordered gin and tonics. We enjoyed drinking them on the rooftop in a relatively quiet atmosphere. The bartender was also very attractive, so be on the lookout for him when you visit. And don’t worry about the impending cooler weather—the patio has heating lamps that kept us quite comfortable while we drank and chatted.

Oh, Felipe’s. What review of outdoor drinking in the Square would be complete without our new favorite venue? Unsurprisingly, however, getting onto the roof was an absolute shit show. I would describe the atmosphere at the steps leading to the second floor as “brogressive.” The bar at capacity, a middle aged woman (who I am not convinced actually worked there) was blocking access while Brooks Brothers-clad 18-year-olds approached and whispered pleas in her ear. I’m not sure what they were saying, but I imagine it was along the lines of, “My father owns blah blah blah, please let me in.” They were unsuccessful, as were we.

Instead, we opted for my original Felipe’s strategy, the “Marg-to-Go™.” This involves ordering a frozen margarita and taking it on the road. Because Felipe’s serves its frozen margs—which would be more aptly named Tequila Slushies—in styrofoam cups, one can take it to go quite surreptitiously. Highly recommended.

Post Marg-to-Go™, we were stumbling. (It was our third drink of the night.) Seeing as we still had one bar left to hit, we decided to pump the brakes and visit our favorite drinking establishment, Quincy, to refuel with some water.

An infinitely better DAPA motto than “Double Fist This.”

Daedalus at 12:30 a.m. on a Friday morning is a pretty sad place. In the three hours since we left, the bar had gone from “dorm party-packed” to “wistfully reminiscent of a modernist novel.”

The bartender was nice, but not too chatty. The sports were on, but not too loudly. The two men at the bar looked sad, but not “help me” sad. It was the perfect environment for us to nurse our last drinks over the course of a half hour and chatter on about life.

I feel like we missed the sweet spot timing-wise with Daedalus, but if we had made it, it would have been really dope. The drinks are quite good and not especially expensive, and as Ben said, it was a good spot to debrief on the adventures of the evening. Highly recommend the Sailor Punch.