Graduation, for a Price

Leading up to Commencement, many Harvard seniors worry about finding the perfect dinner venue, or balancing their final days at the College between family and friends.

But some, like Edgar J. Orozco ’16, worry if their families can make it to Commencement at all.

Orozco’s parents, who are Mexican immigrants, saved money for nearly two years to buy plane tickets from California to Boston. His father is a construction worker and his mother is unemployed. Neither one has ever visited the east coast.

Orozco said other students have taken care to be welcoming and include him in events when families visit campus—such as move-in day or parents weekends.

“But that doesn’t mean that you don’t kind of feel this isolation,” he said. “It kind of gets shoved in your face almost that you are different from the people around you and that your circumstances are different.”

Though the Financial Aid Office offers various programs for low-income students to offset Commencement costs, some students say the total price tag leading up to graduation detracts from the typically joyous occasion.

For Orozco, the financial burden brought on by Commencement would have been more difficult to shoulder had his father’s boss not offered to pay for his parents’ plane tickets.

Brianna J. Suslovic ’16 lives within driving distance, but she still felt the financial strain of the weeks leading up to graduation. Before students sit in Tercentenary Theatre decked out in their caps and gowns, they participate in senior week events—one last hurrah for the graduating class.

But those events come with a price. This year, the senior soiree cocktail party cost $40. The moonlight cruise around Boston Harbor cost $30. And the Last Chance Dance, where seniors experience the nostalgia of a similar dance from the beginning freshman year, cost an additional $30.

Students eligible for the Students Events Fund, a program that provides free event tickets to low-income students, do not have to worry about paying for senior week events. There is normally a cap of five free events per semester for SEF-eligible students, but Director of Financial Aid Sally C. Donahue said there is no limit during senior week. 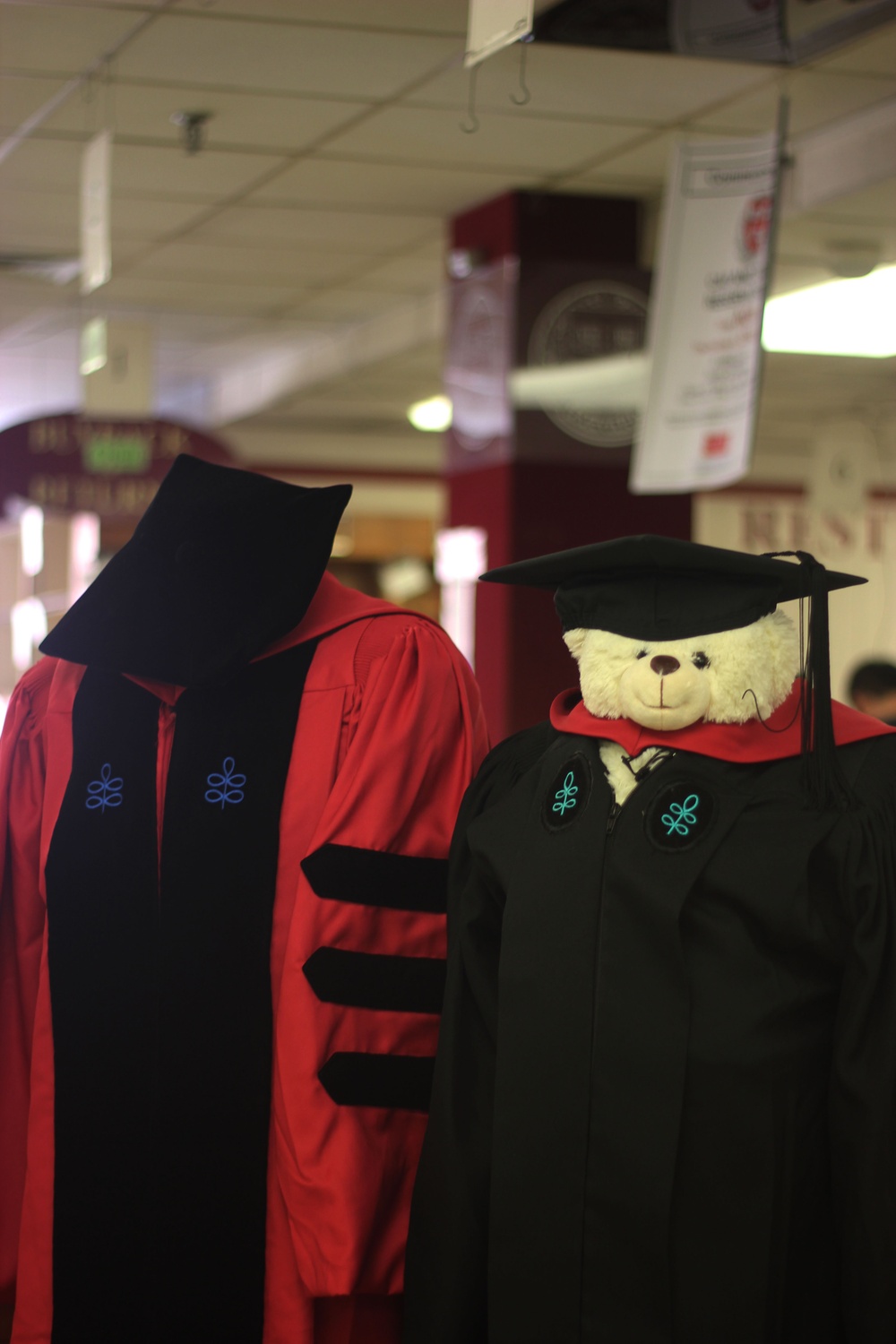 A display of caps and gowns is located in front of the Coop's graduation rental station. By Lauren A. Sierra

Suslovic, who gets near-full financial aid and has worked up to three jobs at a time in the past, was SEF-eligible for the past several years. But this year she was not, and therefore missed out on certain memorable senior week events.

Had she been SEF-eligible this year, Suslovic said, “I would have definitely just felt, I think, more comfortable about the week overall.”

“There are plenty of free events that happen but I think that there’s still a large social emphasis on the events that are ticketed,” Suslovic added.

Students are often enticed to shell out money beyond the mandatory $40 cap and gown rental. Suslovic said she has felt a social pressure to purchase extra mementos, including $130 yearbooks, $35 class photos, and class rings, which can cost several hundred dollars.

“I didn’t even let myself consider getting a class ring or yearbook,” Suslovic said, adding that she is budgeting her money because she intends to go straight to graduate school and find an apartment.

Besides the extra keepsakes, accommodations are an unavoidable expense. Hotels in particular are pricey during Commencement week; “stupid expensive,” Orozco said. 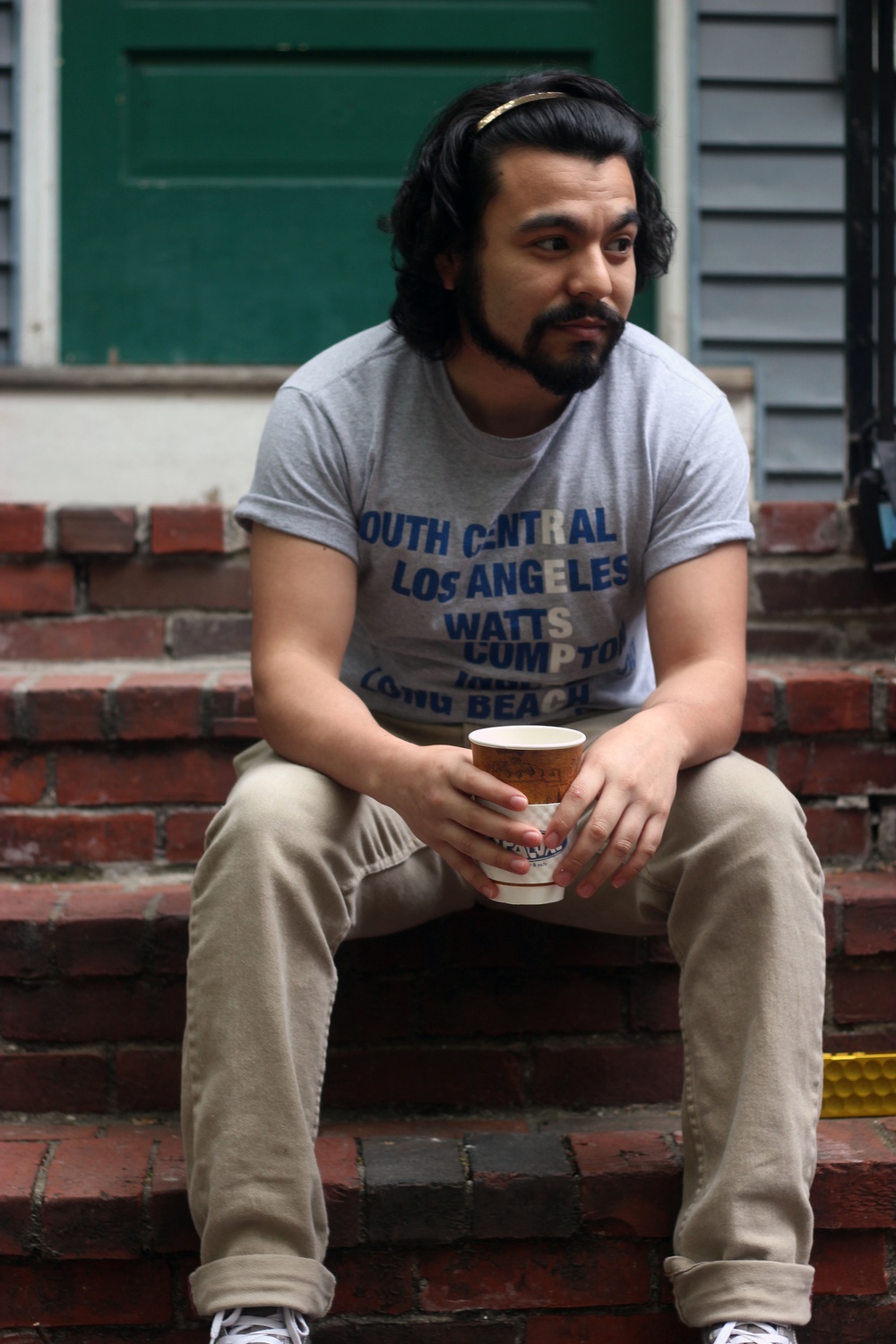 Edgar Orozco ‘16 felt unprepared to afford the steep cost of Commencement and related activities. By Lauren A. Sierra

Hotels near Harvard Square cost more during Commencement because of high demand. One night at the Charles Hotel starts at $1,000 compared to an average rate of $350 during other times of the year, and each reservation requires a three-night minimum stay, according to brand marketing manager Greg S. Bodenlos.

The Charles Hotel is already taking reservations for next year’s Commencement, Bodenlos added. Hotel Veritas, where rates are sometimes as low as $200 a night, have basic rooms priced at $775 during Commencement. Concierge Megan B. Grosovsky recommends booking more than six months in advance, although the hotel does not allow cancellations or provide refunds. Normally, Hotel Veritas allows cancellations two days prior to arrival. 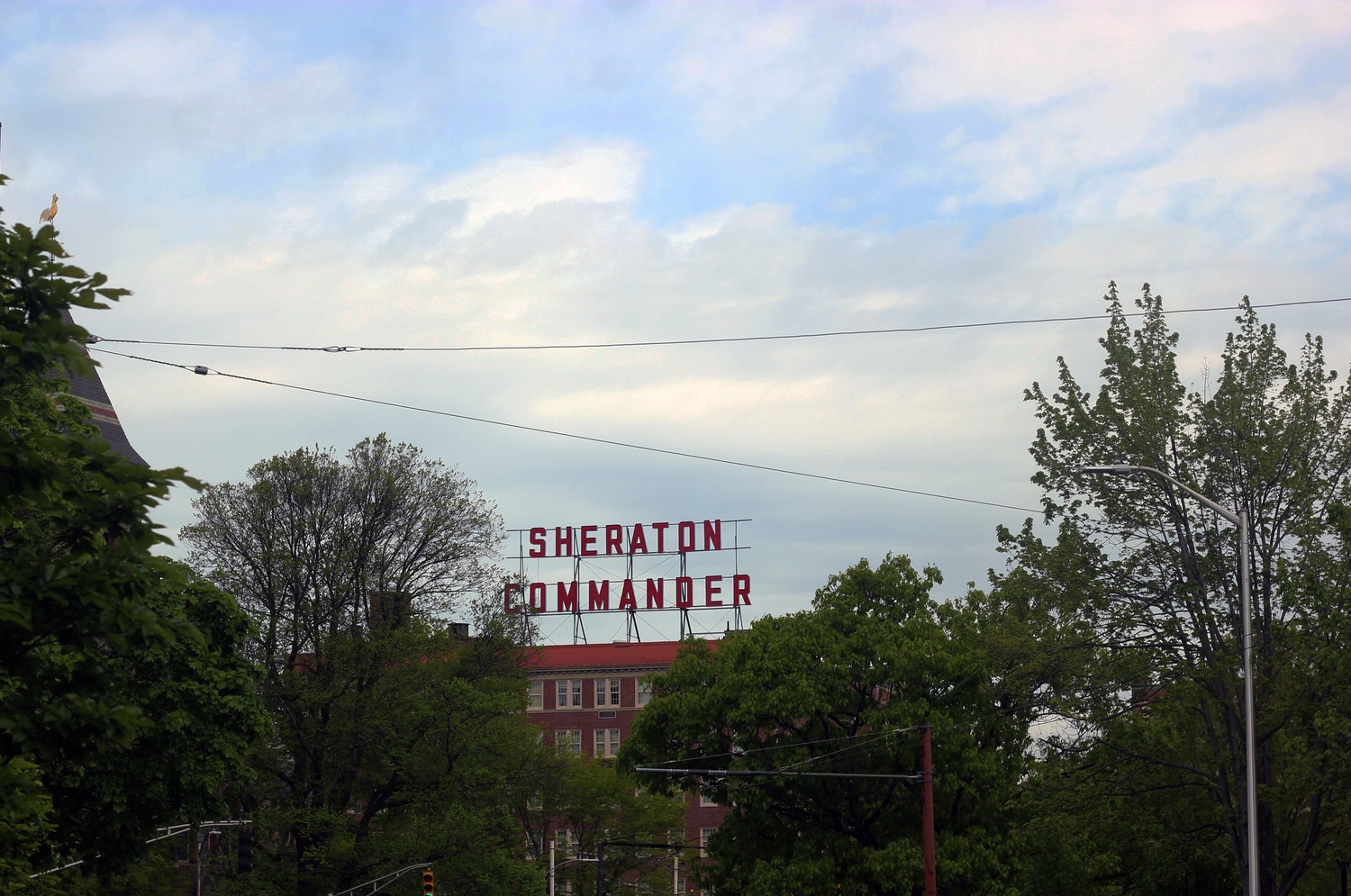 The Sheraton Commander is a popular hotel in Harvard Square for parents of Harvard students to stay, especially during Commencement. However, prices are steep and rooms go fast during Commencement season. By Lauren A. Sierra
Advertisement

“If we took reservations three or four years in advance, we might see demand as soon as somebody gets into Harvard,” Bodenlos said.

While Bodenlos may have just been hypothesizing, some freshmen—especially those who come from low-income backgrounds—are already thinking about Commencement expenses.

“It’s definitely a worry of mine. Looking towards the future, I don’t really know how I’m going to fund all these expenditures,” Diana C. Barreto ’19, a first-generation college student, said.

‘People Don’t Know About This’

To shoulder the burden of pricey accommodations, the Financial Aid Office and the Office of Student Life offer a parent guest program to students who receive significant financial aid, according to Associate Dean of Student Life David R. Friedrich.

However, Suslovic and Orozco said they had never heard of the program. They said they thought the Financial Aid Office lacks proper communication with students, and that many people only hear of assistance for Commencement through word of mouth.

Last year, Sara H. Hankins ’15, submitted an itemized list of her family’s anticipated expenses to the Financial Aid Office to apply for up to $2,000 in funding, which she received. Hankins, who is SEF-eligible, was even offered a loan to purchase a class ring. Though she was impressed with administrators’ generosity, she had heard about the opportunity not through the office, but through a friend.

“I remember thinking ‘people don’t know about this’ when I was applying for it,” Hankins said. “To students who aren’t really tuned into financial aid opportunities, they probably wouldn’t ever know.”

But for the first time this year, low-income students were contacted about this informal program that assists with expected Commencement-related expenses, according to Donahue. In previous years, students had to reach out to the Financial Aid office directly if they needed help.

“It’s becoming a little bit more formalized as we realized that it’s actually best to reach out to the students directly whom we know are going to be eligible for that benefit,” Donahue said.

Although students were contacted early in the spring semester, some still were not fully knowledgeable of the programs available.

Donahue and Friedrich encourage all students to reach out to their financial aid officers to discuss any concerns, and emphasize that they can always find some way to help. But for some, having that sit-down conversation is difficult.

“It really takes a while for us to kind of realize that we should be asking for help,” Orozco said. “It’s not something that’s necessarily been in the culture that I and many of my low-income, traditionally disadvantaged friends kind of grew up with.”

Some non-SEF eligible students who are still struggling financially did not feel that they could ask for help.

“I think that if I were still SEF-eligible, I would be more comfortable reaching out to them,” Suslovic said. “I think I would just feel uncomfortable asking for something when it wasn’t necessarily for me.” 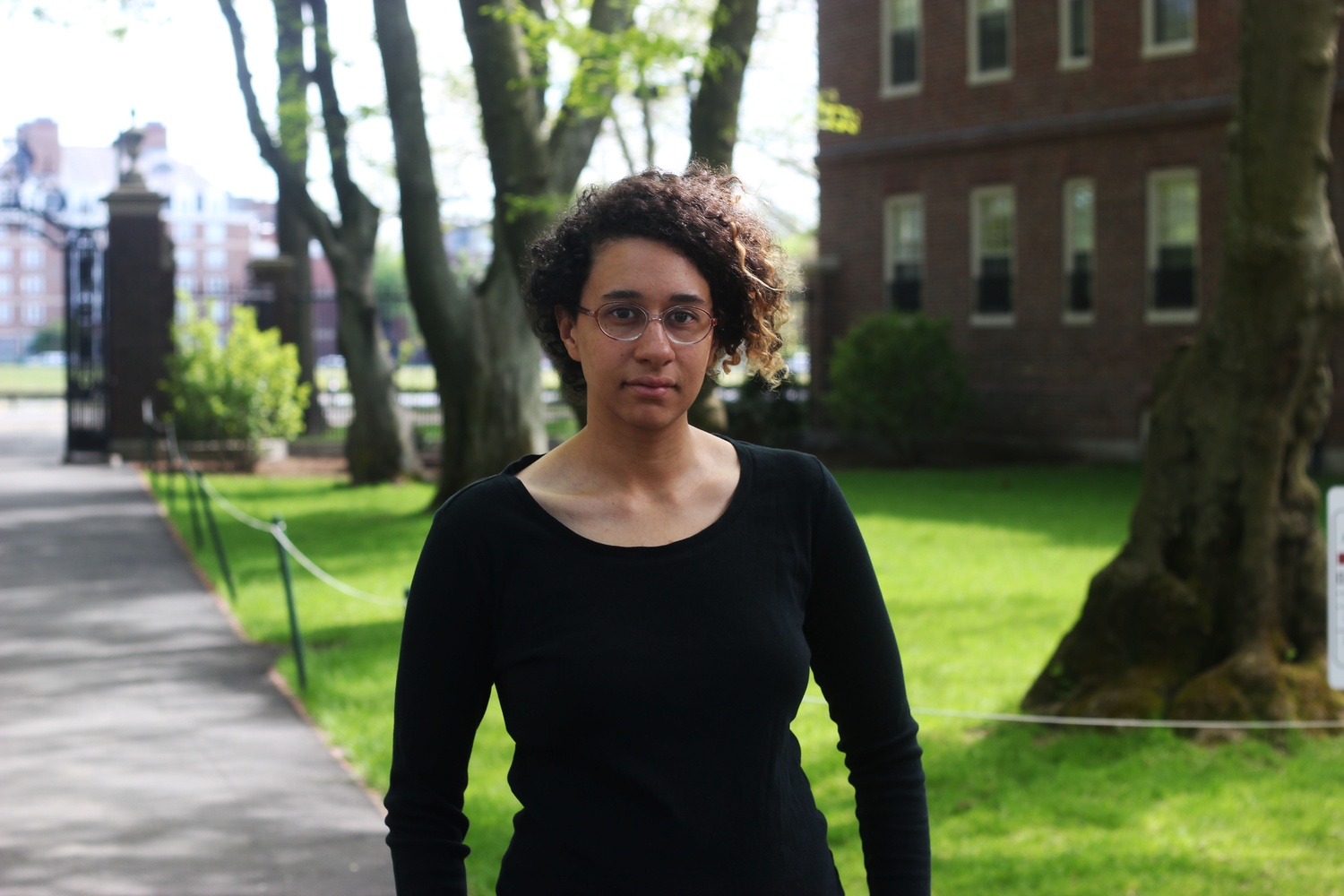 Brianna Suslovic '16 is pictured outside of her house, Winthrop. Suslovic felt like lack of information about the costs of Commencement and Senior Week did not allow her to properly budget and therefore she had to go forgo several events because she could not afford them. By Lauren A. Sierra

Students said the Financial Aid Office could be more transparent at the start of senior year about how costly Commencement can be. Suslovic said she could have gone to more senior week events if she had known about the expenses ahead of time.

“A lot of the costs are not made clear to you until the week before all of these events, so there’s not time to budget for any of them,” Suslovic said. “If I had known about these costs at the beginning of senior year, I would have been able to save more money or at least spend my money differently.”

Suslovic said she wishes the Financial Aid Office contacted all seniors about holding office hours, where they could discuss any concerns. Orozco said he would have found a physical Commencement package detailing all of the costs immensely helpful.

With these efforts, White is confident the Financial Aid Office is making improvements.

“Since our program was created, they’re becoming pretty aware of the different financial barriers,” White said. “I’m pretty optimistic about where it’s going to go.”