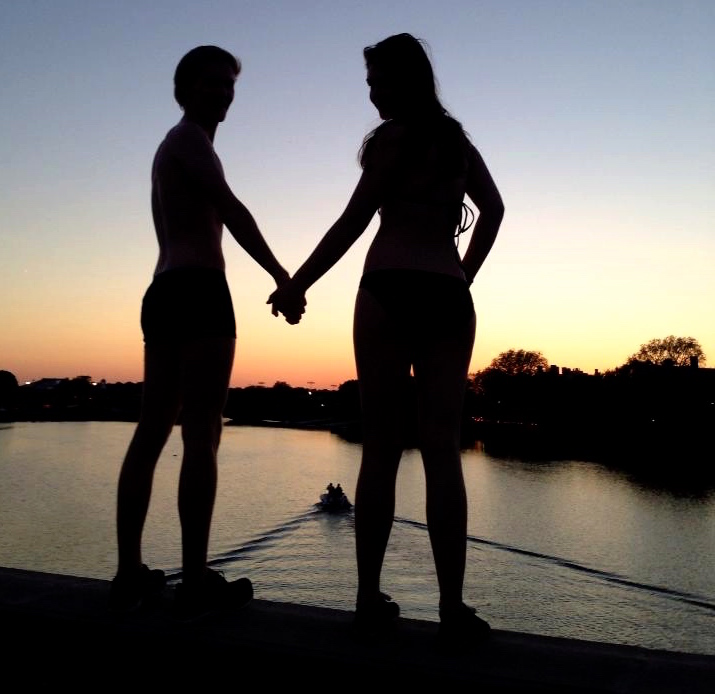 I have tried to discern why we felt and feel so old: why HAA membership smacks of the AARP; why my friends talk of penultimate experiences as if commencement will bring coffins, not diplomas; why I perceive habits and flippant acts ossifying into destiny.
By Colton A. Valentine

“She had a perpetual sense, as she watched the taxicabs, of being out, out, far out to sea and alone; she always had the feeling that it was very, very dangerous to live even one day.” —Virginia Woolf, "Mrs. Dalloway"

While choosing classes this January, a friend saw the end of her life. Selecting a med-school course, she explained, would lock her in for patient care; one on bioinformatics meant a fast-track to industry. She listed electives in choked tones. Dozens of English and Philosophy syllabi would remain unread, each an alternative identity receding before her. Knowledge, she said, seemed for the first time finite; each course could only signal the thousand she had failed to take, a series of fractal-lives slain in a single plan of study. Our conversation turned to death: to fatal illness, contingency plans and our mutual sense of an ending. At 21, we had become two Mrs. Dalloways nearing our demise, though Woolf’s protagonist had lived more than twice our dangerous days.

In the following months, I have tried to discern why we felt and feel so old: why HAA membership smacks of the AARP; why my friends talk of penultimate experiences as if commencement will bring coffins, not diplomas; why I perceive habits and flippant acts ossifying into destiny. Woolf’s work offers me a clue: She defines age by the number of forking life paths we perceive before us at any moment. Youth is the sense that our existence can play out on endless wandering roads, but the fewer we see, the more we age. To visualize a lone route before us is to become unspeakably old. And since graduation confronts us with that singular trajectory, I begin to think of college seniority as a heuristic for real seniority. My mind’s texture feels more and more like "Mrs. Dalloway": precarious and weighty, distant and fraught.

I spy age in my language, in the way I’ve slipped into the truisms of nostalgia. These are the phrases adults would recite as I left high school—a collection of stock words I could not stand. Yet I catch myself saying “make the most of each moment” to underclassmen, when I’d have been repulsed by those same formulations three years before. Woolf speaks of youth far better: “What lark, what a plunge!”—a day whose cusp offers the escapade, the daring dive. My sophomore year, a professor told me I could never understand Vladimir Nabokov’s "Ada or Ardor" until I’d passed 30—because only then would I have internalized the burden of time. But when I hear my words these days, I sense the hour’s provisional grip. Lowell’s bell-tones are physical and weighty, a Cantabrigian analog to Big Ben’s irrevocable leaden circles: They are darkening the forking paths one by one.

The routes brighten when I hear an elder perspective, when I swap compers for professors or visit New York for the weekend. At faculty dinner, a grad student illuminates alternatives with an anecdote: Mid-March as a junior, she ripped out the pages of the textbooks she’d need for final papers and bought a ticket to Europe. She studied abroad senior fall, came back for a glancing graduation, yet her world has not fallen apart. She is there, brilliant and beaming, fluent in French, writing a dissertation as she wanders a picaresque path that, to me, seemed long-veiled. Routes reopen before me; I feel the flutter of youth’s lark once more.

But days pass, and my eye moves farther out at sea. Polemics on campus politics feel frivolous; the weekend’s bacchanal frenzy becomes a flippant option on a tiresome circuit. I enter a stoicism both freeing and dulling: Events good and bad flatten into unending monotony. I understand what Joan Didion said when she fled New York: “Everything that was said to me I seemed to have heard before, and I could no longer listen.” Instead of Woolf’s taxicabs, I watch the paths tread by underclassmen, repetitions of destinies I can no longer regain.

The distance brings Clarissa's words back to me: “Did it matter that she must inevitably cease completely? All this must go on without her; did she resent it; or did it not become consoling to believe that death ended absolutely?” I too am becoming spectral, my absolute Harvard-end eased by staying aloof. Age’s glasses may be rose in hindsight, but when mine look on the present, more often they are made of jade.

These moments of senescence define some crucial part of senior spring. Our time is told in linear events—a thesis, a spring break, a graduation—but I feel it differently: as a constant oscillation between youth and age. I am bouncing between exaltation and apathy, seeing the dimming paths as parlous, then all the same.

This time is dialectic, so I tell my friend I am working on my carpe diem calibration. We will not die tomorrow—the senior heuristic is only a heuristic—but we feel the rub of finitude all the same. Marcel Proust wrote, “I think that life would suddenly seem wonderful to us if we were threatened to die”; Martin Heidegger believed authentic Being meant Being-toward-death. So at times I feel blessed that the weeks before graduation have become a microcosm for mortality—a petite mort in which we dream of Widener petites morts. My friend and I grasp at the grain of age, but the lark’s peril still lies in our reach.

We may begin to understand Mrs. Dalloway at last. She too “felt very young; at the same time unspeakably aged.”