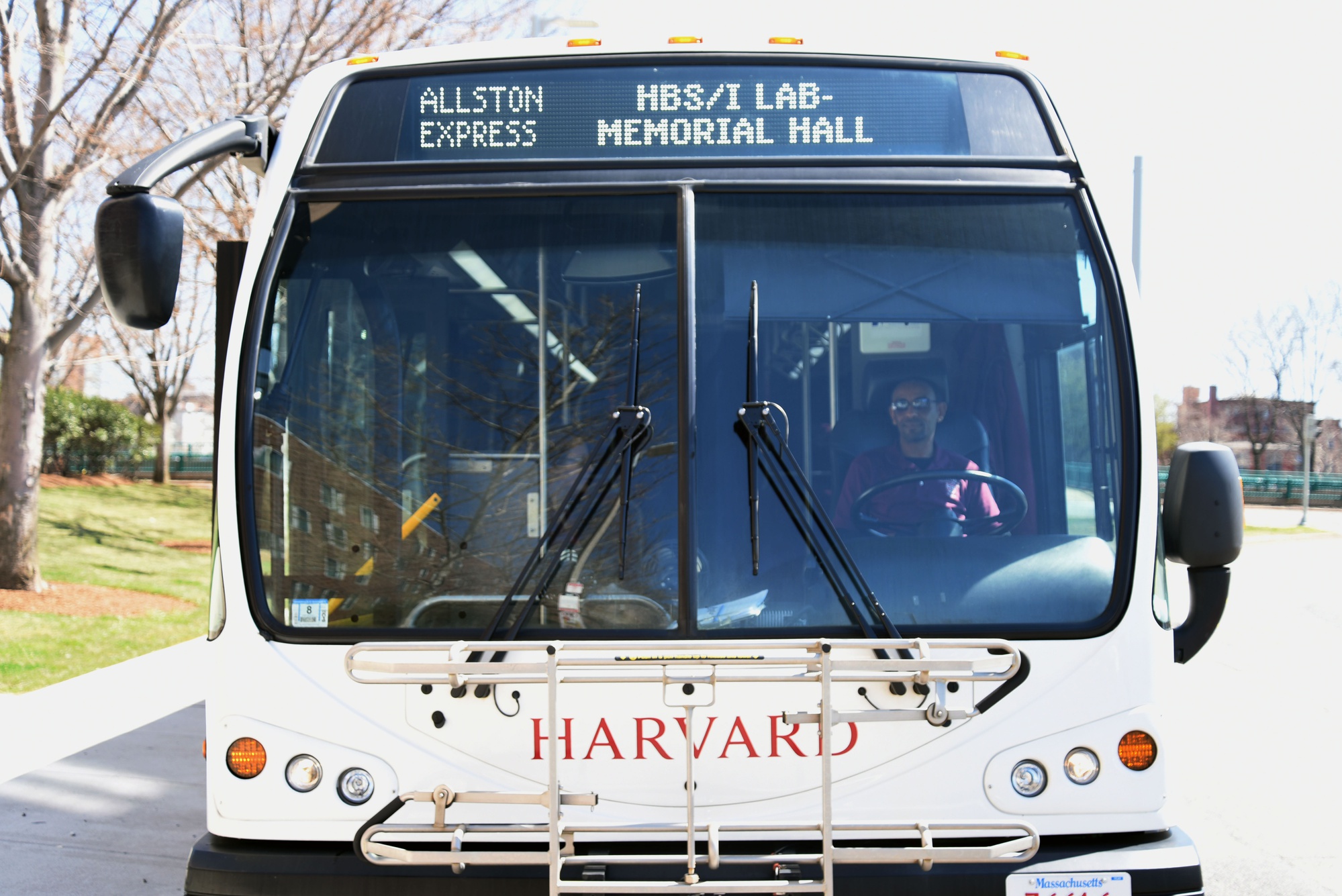 Bariagaber ran the full Boston Marathon on Apr. 18, over 30 years after making an overseas voyage from Eritrea to the United States.
By Annie C. Harvieux

The journeys we undertake with Harvard’s shuttle drivers are typically short, repetitive, and mundane: rolling from the Quad to the Yard, getting a lift to the iLab, making it home to Mather for dinner. However, the journeys undertaken by Harvard shuttle drivers are a different story entirely—take, for example, Danny Bariagaber, who drives the Allston Campus daily route. Bariagaber also ran the full Boston Marathon on Apil 18, over 30 years after making an overseas voyage from Eritrea to the United States.

To catch up with Bariagaber, I hop on his bus to make the loop from Memorial Hall to Allston and back with him. He pulls a classic dad joke right away: When I check to be sure he’s Danny Bariagaber, a grin comes over his face. “Depends—is it a good thing or a bad thing?” With a wiry runner’s figure and dynamic voice and personality, Bariagaber captains his bus (and life) with a clearly active, positive philosophy. 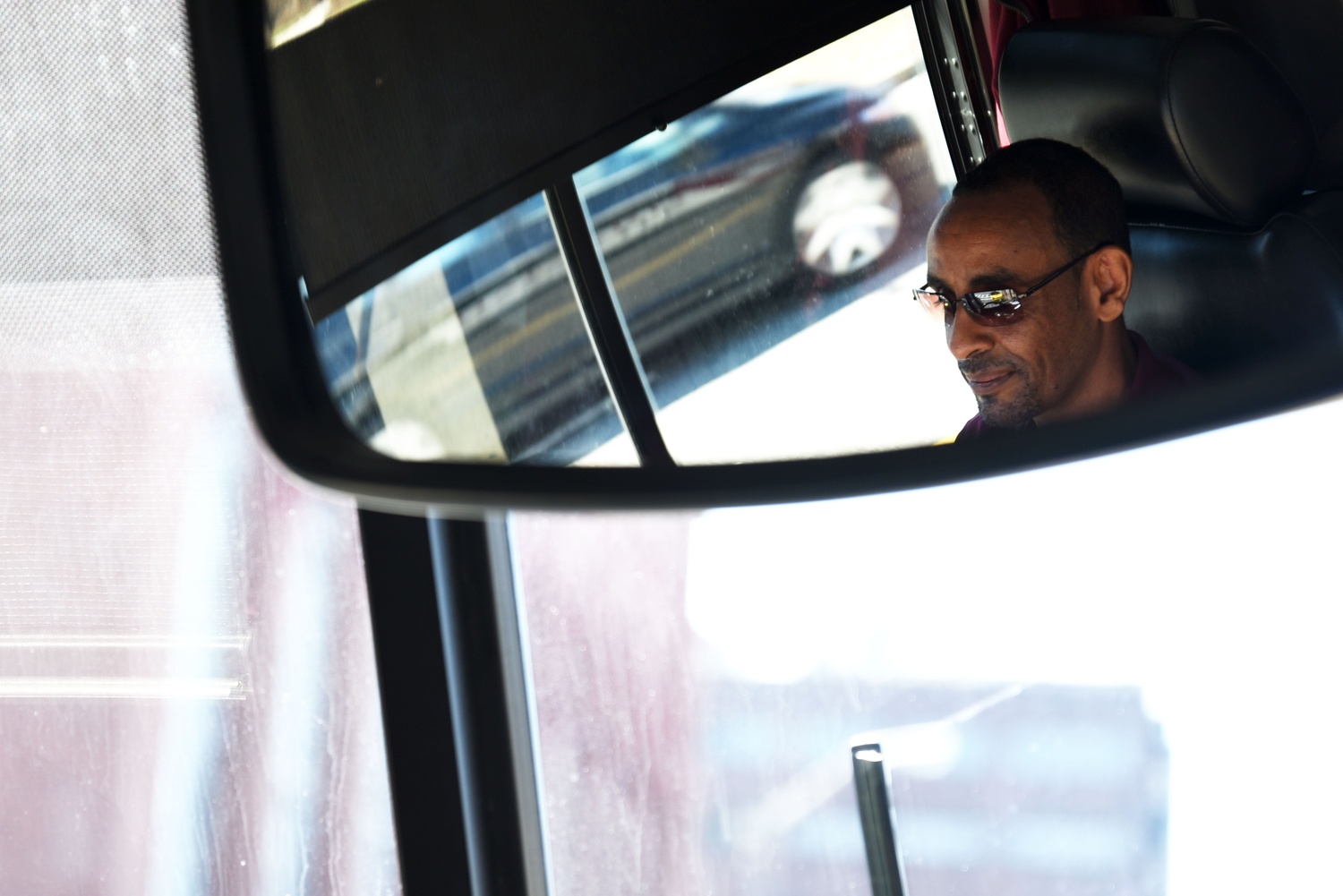 Bariagaber grew up playing soccer but had to quit when he tore his ACL. He rationalizes his running as healthy and fun, but he’s also driven: “As you get older, you want to get healthy, you know?” he says. “So I started running—from 5k to 10k to half marathon to full marathon, it gets addictive.” He did his first marathon five years ago for fun with some friends, and qualified for this year’s Boston Marathon during the nearby Lowell Marathon. Bariagaber attributes some of his recent success to being able to practice on a course that’s only 20 minutes from home—as a parent with a day job, that convenience factor is important. 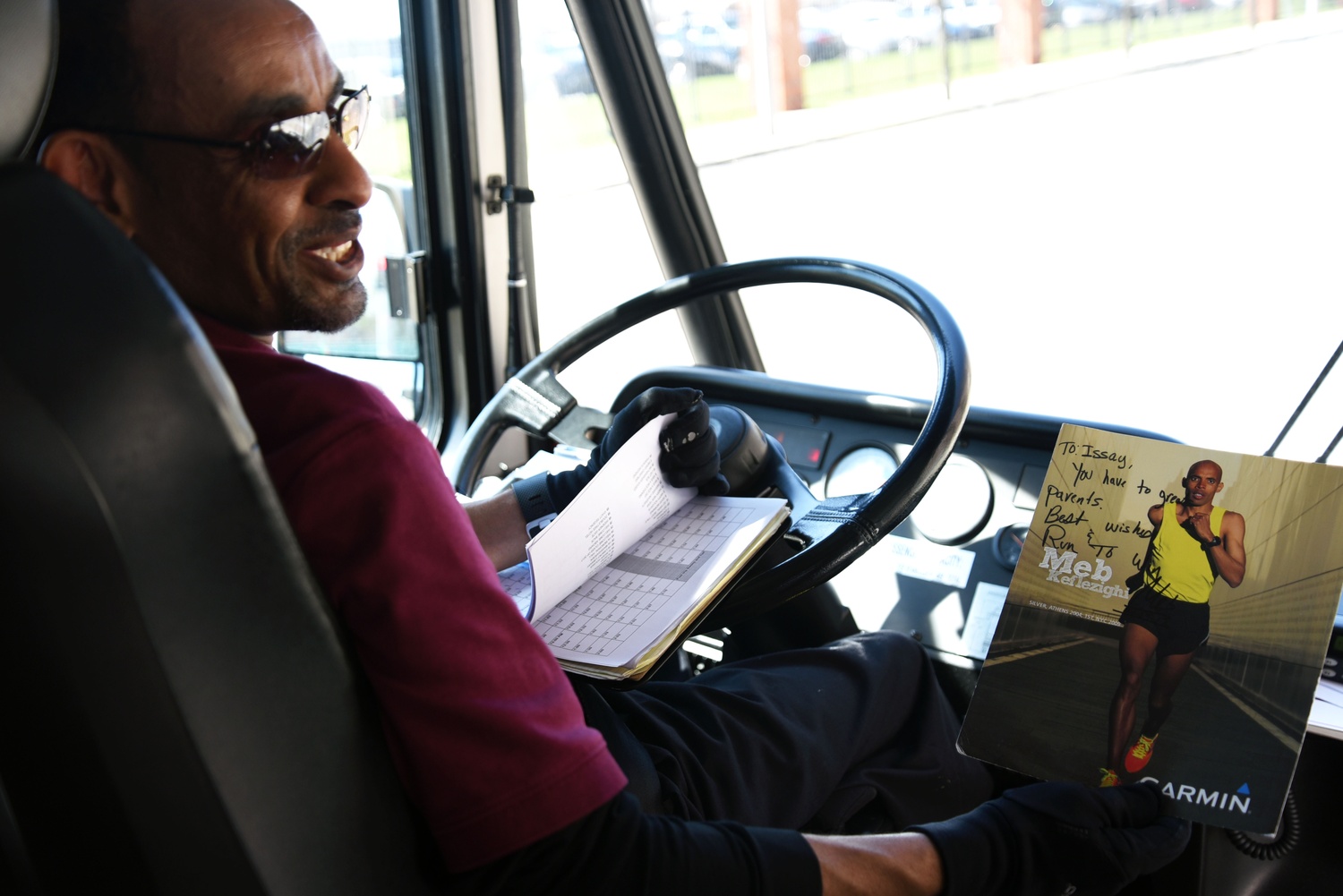 Long before he was a marathoner, a bus driver, or a dad, Bariagaber lived in Eritrea. Bariagaber migrated with his family from Eritrea to Boston in 1983 because of the war between Eritrea and Ethiopia. He went to high school here in Boston, and lived in California for a while before returning to the city. Though Bariagaber’s parents have both gone back to Eritrea, where he visits every other year for two to three months, Bariagaber and his siblings all reside in the Boston area: “We’re all Americans,” he says. 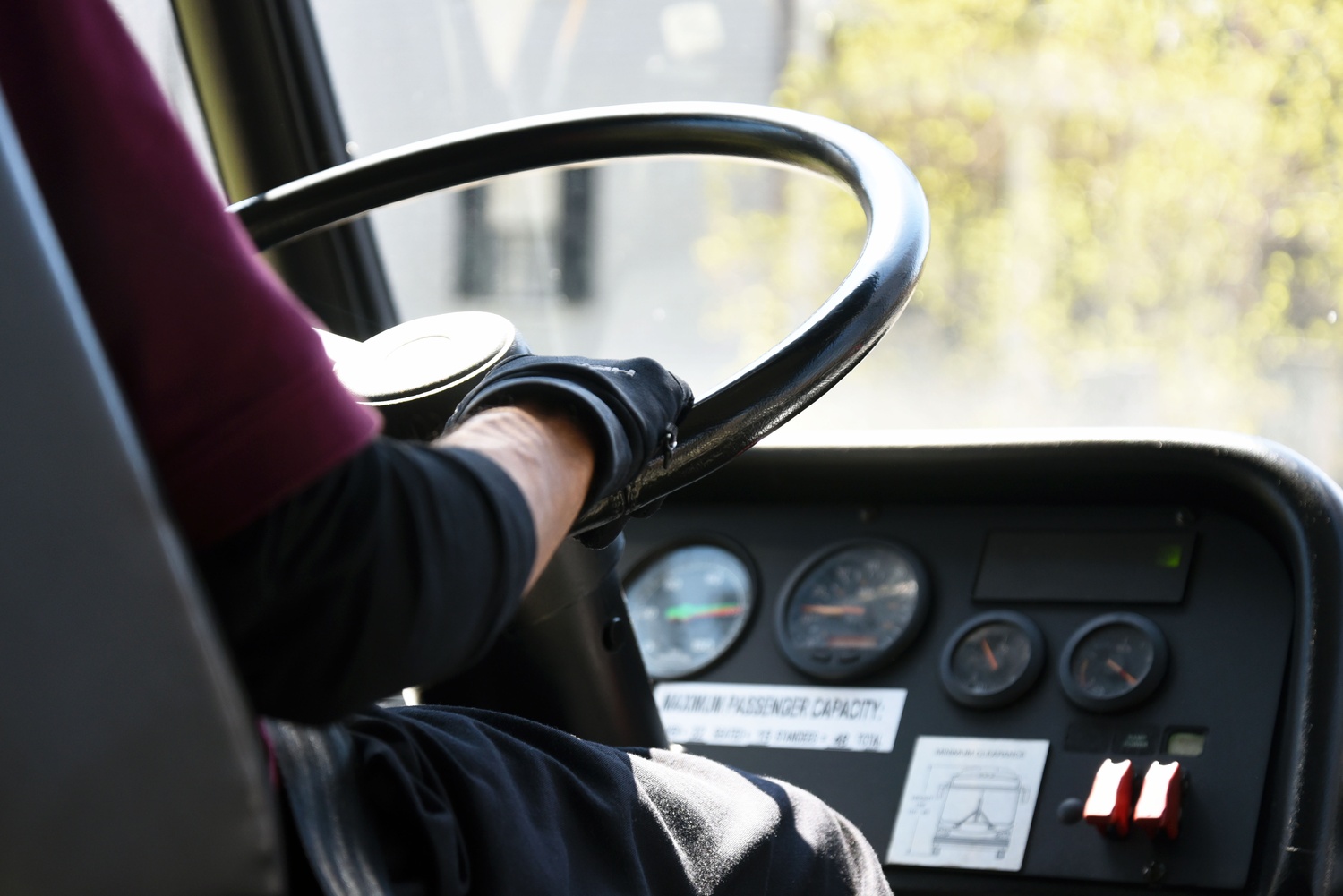 Bariagaber’s bus driving is smooth and skillful, perhaps in part due to his training as a pilot: While he lived in California, Bariagaber attended Mason College and earned an aviation degree. “I was an aviation major, and I wanted to go back to Eritrea to start my own aviation industry, a tourism type of thing,” Bariagaber says. “So I came back here to save enough money, but after 9/11 things have changed around the world, and I can’t go back there for that, so now I’m driving buses instead of flying planes.” Though Eritrea has returned to stabler times and Bariagaber is able to go back and see his family, he’s continued to work as a bus driver ever since: first at MIT, then at Harvard, which he says offers better benefits for a dad “trying to put bread on the table” and care for his son. 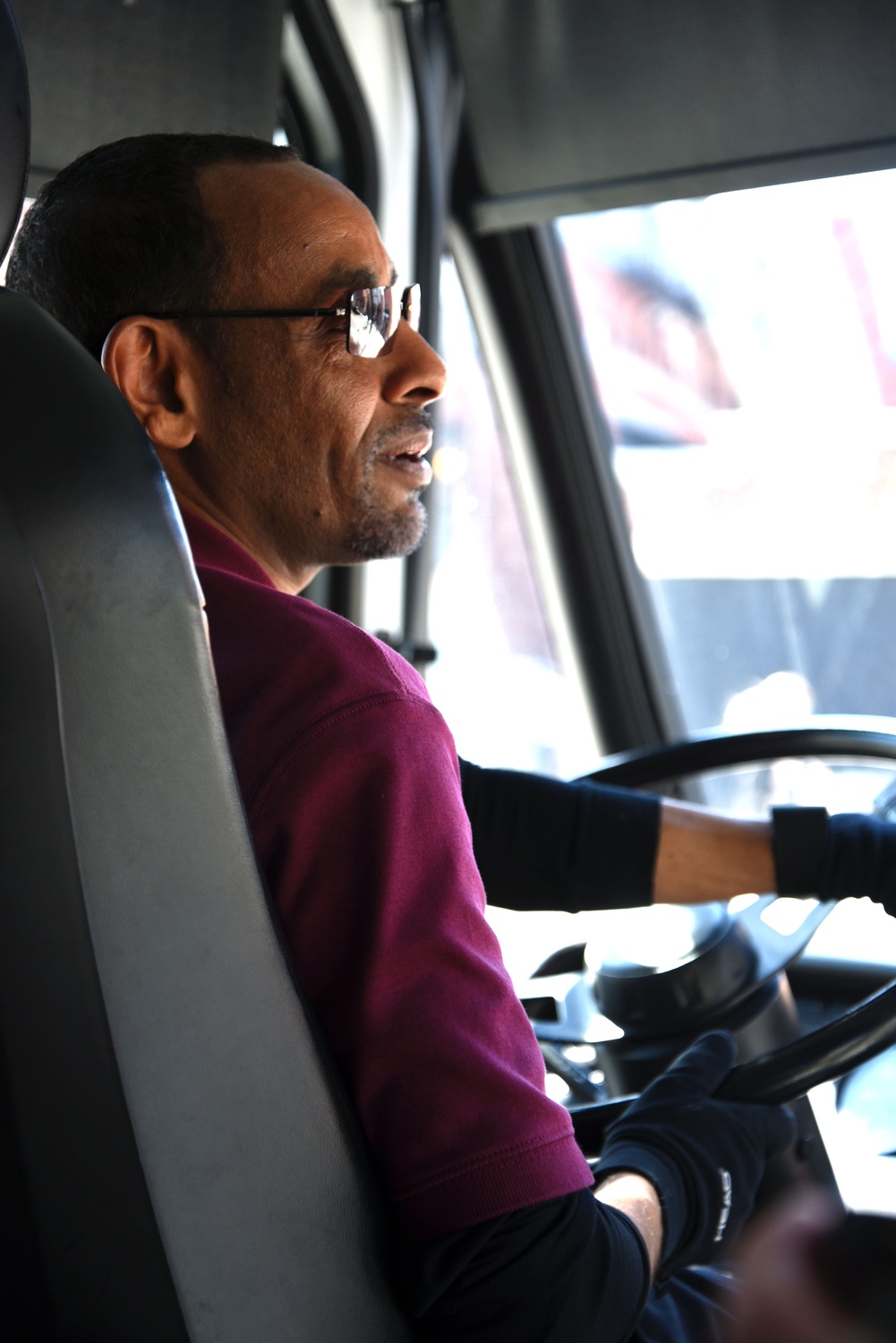 Bariagaber has taken advantage of Harvard’s other resources as well: He has a Harvard gym membership, which he uses to crosstrain and cycle to maintain his marathon-ready fitness. He cites the Murr Center as his favorite gym. He also intends to start taking advantage of other facets of Harvard: “My goal is also to start finding my way around, and to take some classes at the Extension School,” he says. When I ask about his interests, he expresses an enthusiastic open-mindedness to various subjects, along with interest in some vocational courses.

As Bariagaber’s shuttle makes its longest sitting stop (it’s pulled over to a curb on the Business School campus), he opens a binder and pulls out a card. It’s a photo of professional runner Meb Keflezighi, autographed by the athlete himself to Bariagaber’s son, Issay, with a note reading, “You have great parents. Best wishes and Run to Win!” Keflezighi was the man to win the Boston Marathon the year after the 2013 Bombings, and, Bariagaber points out with pride, Keflezighi is Eritrean-born, a second cousin, and the first American to win the Boston Marathon since the early 1980s. Danny beams with pride at the photo before tucking it away.