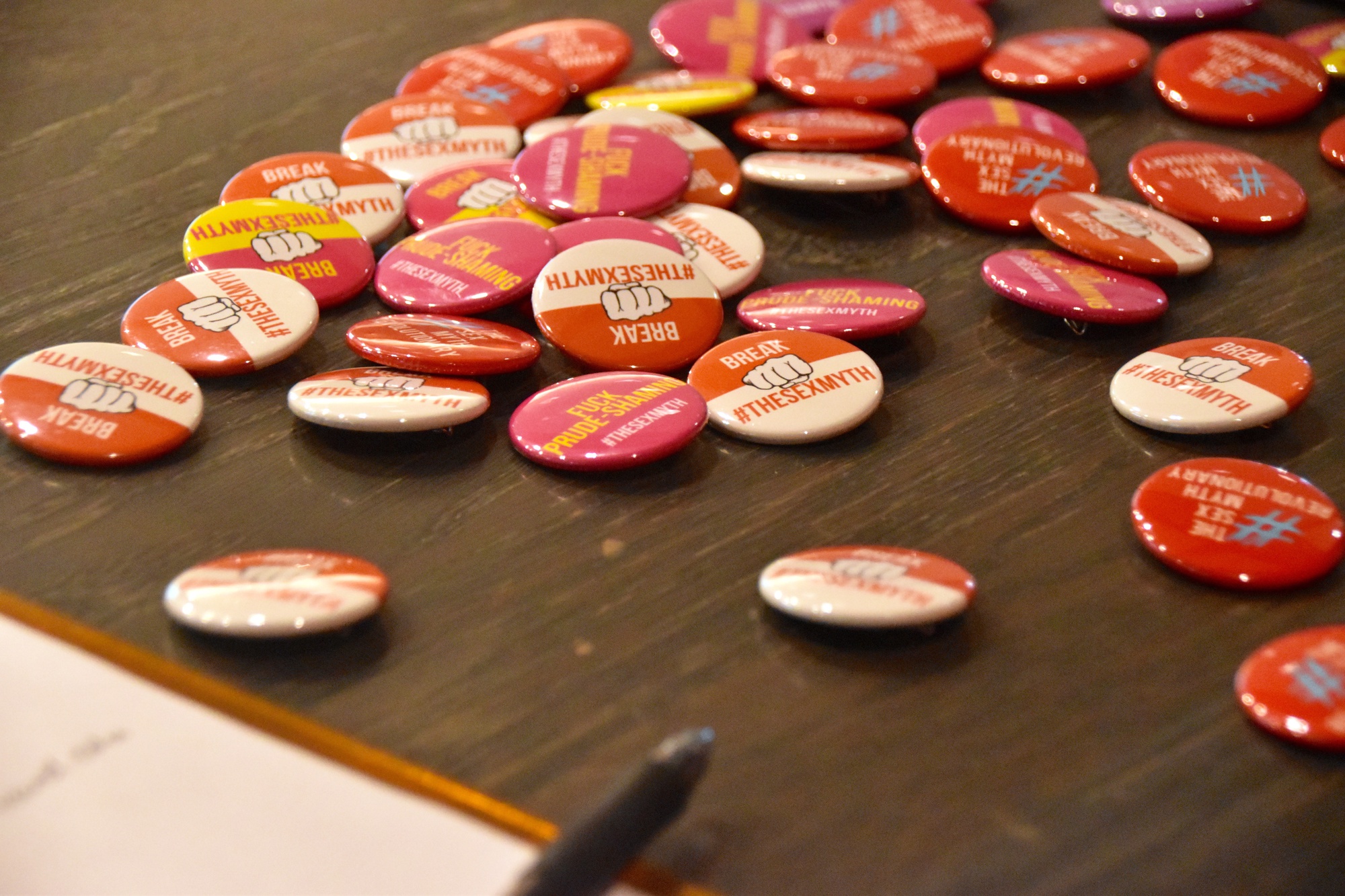 Pins decorated with the message “Break #TheSexMyth” on display at “Busting Sexual Stereotypes” on Friday in Sever Hall. The event was held as part of the annual Harvard Sex Week. ​
Advertisement
Advertisement

Between “Reclaiming Your Body,” “Busting Sexual Stereotypes,” and “Party in your Pants,” Sex Week strived to cover all the bases—pun intended.
By Valerie B. Elefante and Rachel H. Janfaza

It’s 9 p.m. on a Wednesday. Students carrying handfuls of condoms, lube, and vibrators file out of Sever Hall as the presentation titled “I Only Use Magnums: How to Find a Condom Size that Actually Fits” comes to an end. This is Sex Week at Harvard.

Organized by members of Sexual Health Education & Advocacy Throughout Harvard (SHEATH) and co-sponsored by the Harvard Queer Students and Allies, Harvard College Women’s Center, and BGLTQ Office of Student Life, Sex Week is a student-driven initiative that strives to empower the Harvard students to explore issues of love, sex, sexuality, gender, gender identity, and relationships. Now in its sixth year, the program includes a series of lectures, panels, and conversations about some of the most stigmatized and controversial topics on campus.

Sex Week began Oct. 30 with the kick-off event “Sex Ed 101,” and ran through Nov. 6, culminating with a discussion titled “Pset and Chill: Hookup Culture at Harvard.” Between “Reclaiming Your Body,” “Busting Sexual Stereotypes,” and “Party in your Pants,” Sex Week strived to cover all the bases—pun intended. 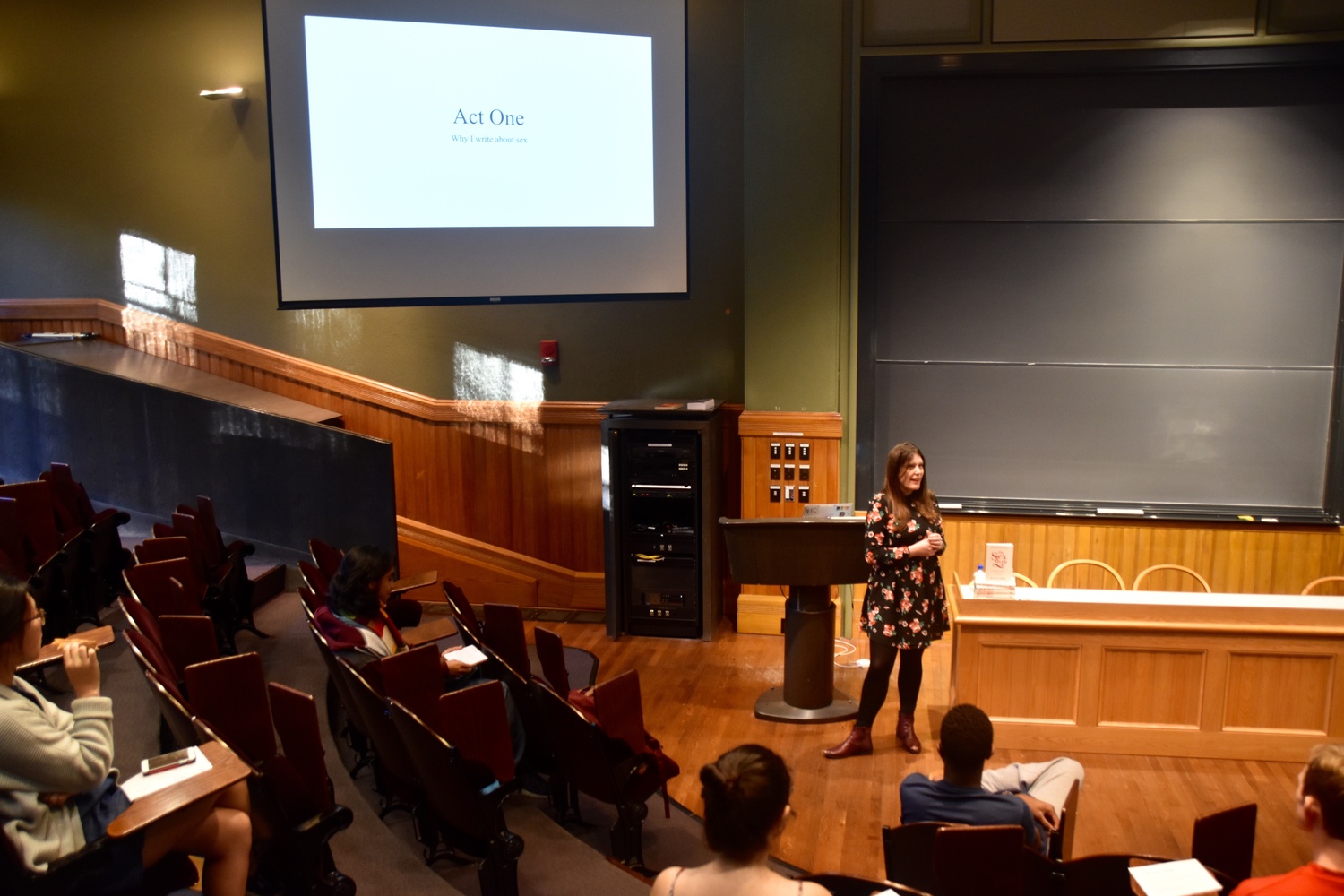 Rachel Hills, author of “The Sex Myth,” speaks during a talk titled “Busting Sexual Stereotypes” on Friday in Sever Hall. The event was held as part of the annual Harvard Sex Week. By Melanie Y. Fu

While growing up in a progressive household within the predominantly Mormon town of Elko, Nev., Lamp experienced a drastic contrast between openness about sex-related issues in her home and the repression of these ideas in her surrounding neighborhood.

“The entire attitude around sex is very much like the ‘Mean Girls’ quote, ‘If you have sex, you’ll get pregnant and die,’” she says. “People have sex all the time, but nobody talks about it, and when you do, it’s to condemn people for having sex. I didn’t fit with that, didn’t jive with that... I spent most of my adolescent years fighting against this constant force.”

When Lamp came to Harvard and heard about Sex Week, she was enthusiastic about getting involved. Alongside SHEATH co-president Lita D. Peña ’19, Lamp has embraced the opportunity to help change campus culture. At the same time, she wishes she could bring Sex Week home to Elko.

“The language that [Sex Week] use[s] around sexuality in the media and the way we portray it in certain movies, I really would love for people in my hometown to see things like that,” Lamp says. “It really does stem from a personal space of just wanting people to feel like they can be accepted as who they are even though there are institutions that tell you that’s not okay.”

Peña had a similar experience growing up, though the contrast between her home life and her neighborhood was not as stark. Living in New York City, she could, and did, openly talk about these issues with friends and family. However, she soon realized that this was atypical.

“Sex and sexuality were always a part of the family dialogue,” Peña says. “When I got to high school and realized people never talked about these things with their parents and were afraid to ask their parents about birth control, I was like ‘What? Oh my goodness. How is this possible?’ I guess I was just shocked that not everyone had this opportunity and was really saddened by that.”

Inspired by their respective backgrounds, Peña and Lamp have worked to provide an outlet at Harvard for students to discuss sex-related topics openly. Some Sex Week attendees say that events made them feel comforable addressing these issues for the first time.“I’ve had certain experiences where, after events, people will come up to me and say, ‘Thank you so much. I’ve never been able to talk about this, because my family really represses these kinds of issues,’” says Peña.

“I think that’s really my favorite part about Sex Week,” Lamp says. “Just being able to help people in their own journey of their own sexuality, or in the way they have sex and the way that they interact with their gender.”