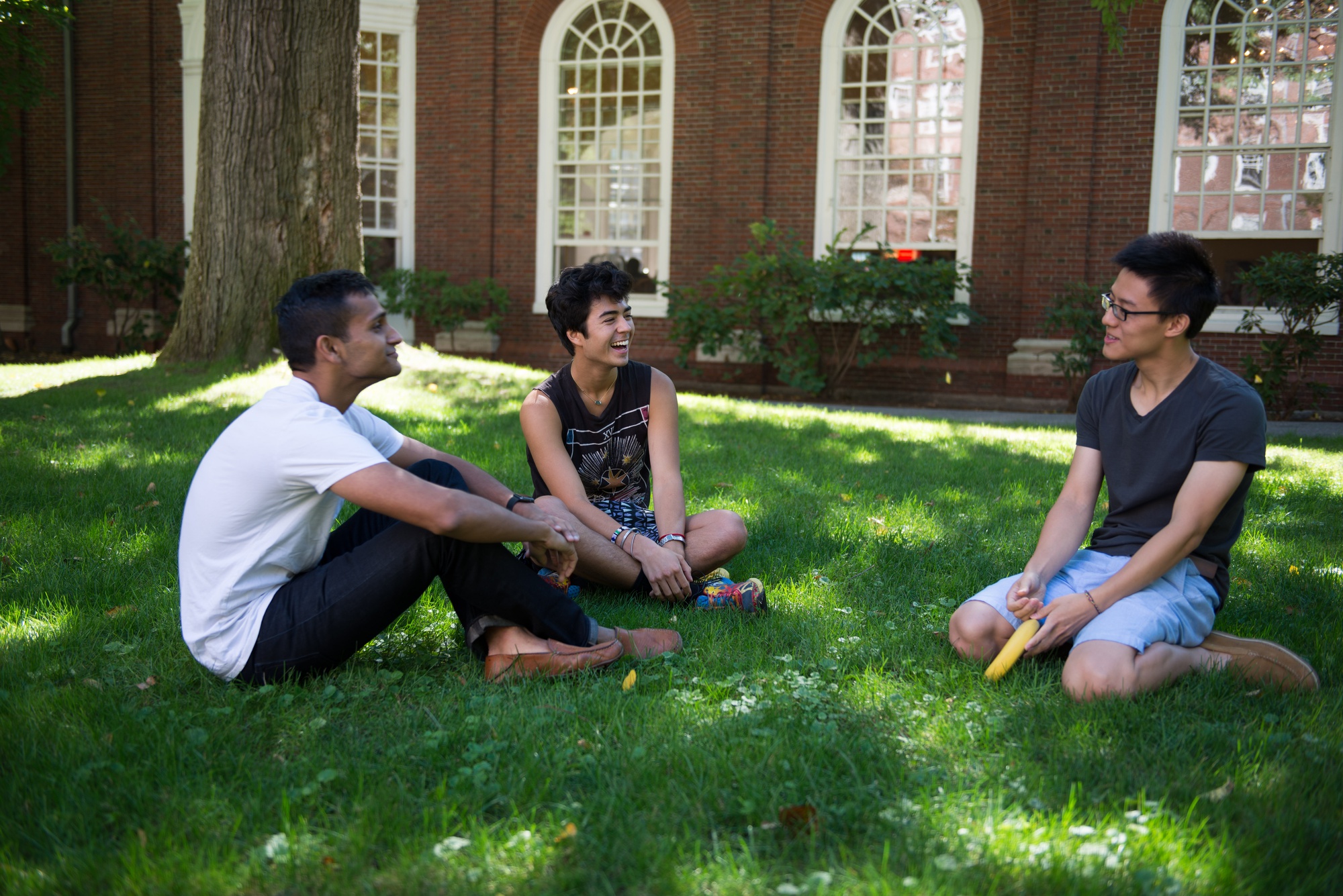 Ankit Shah, the creator of Tea with Strangers, discusses the new Harvard branch with hosts Skip L. Rosamalia ’17 and Bowen Lu ’17 in front of Lowell Dining Hall, where Bowen will be hosting his next tea on Sept. 30.
Advertisement
Advertisement

This is Tea with Strangers, an organization that facilitates casual conversations amongst groups of strangers, with the goal of creating intimate communities in large cities.
By Ben G. Cort and Marella A Gayla

“Some people say that this place looks like a hospital,” the person seated beside us suggests cautiously. It is 3 o’clock on a Wednesday, and we are sitting at a table for five in the corner of the Pforzheimer dining hall. Our host, John D. Bowers ’18, has prompted us to think about the space around us. “Yeah, I really don’t like this room,” another participant adds bluntly, and the nervous tension around the table breaks.

For the next two hours, Bowers facilitates a conversation by asking provocative questions and sharing a few riveting stories of his own. After gently mocking the aesthetic qualities of the Pfoho dining hall, we turn to more personal storytelling. Bowers opens the conversation with a crowd-pleasing prompt for group commiseration. “Tell us about a time when you felt like the universe totally screwed you over, a time when you felt impossibly unlucky,” he begins, prompting airport horror stories and tales of mysterious illnesses in foreign countries.

This is Tea with Strangers, an organization that facilitates casual conversations amongst groups of strangers, with the goal of creating intimate communities in large cities. 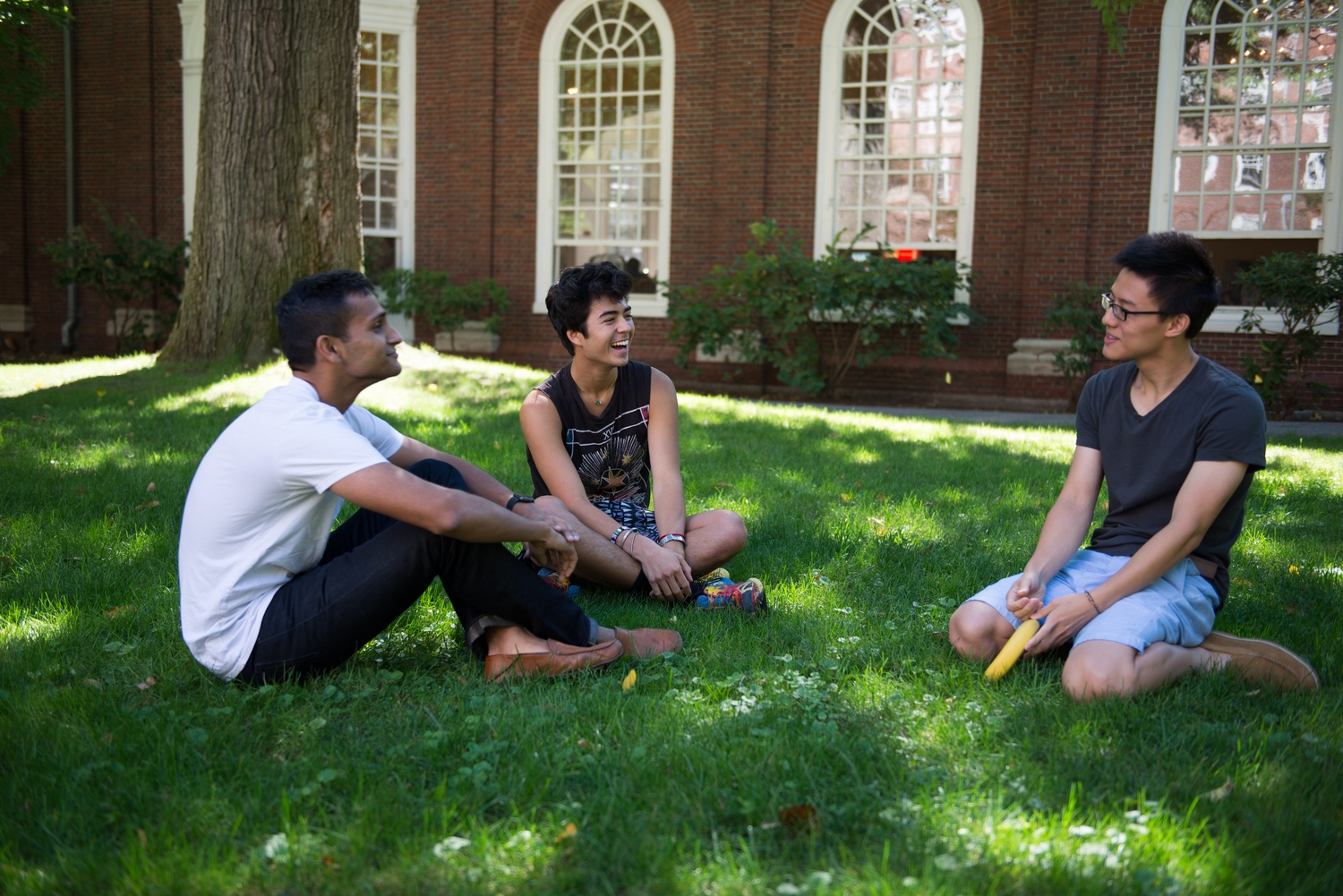 Ankit Shah, the creator of Tea with Strangers, discusses the new Harvard branch with hosts Skip L. Rosamalia ’17 and Bowen Lu ’17 in front of Lowell Dining Hall, where Bowen will be hosting his next tea on Sept. 30. By Alana M Steinberg

Even though Shah saw his project as “goofy,” he has since developed a lofty mission statement. “If you’ve taken any classical economics class, the assumption...is that we are rational, self-interested agents,” Shah says. “My hope is that...with Tea with Strangers, we can create this world that is even more rationally others-interested, because there is much more to be gained when you care about others before you care about yourself.”

Organizing a tea is simple. A host, an affiliate of Tea with Strangers, picks a location and a time, and up to six people use the organization’s website to sign up for the event. Those seven then have a two-hour conversation over tea. Afterwards, they part ways, no strings attached.

After Penn, the “the tea experiment” traveled with Shah to California. “The Bay Area iteration was similar in that it was just me [running it],” he recalls. “Instead of saying, ‘I have six weeks left,’ it was ‘I just moved here.’ There are 8 million people in the Bay Area and I literally knew about four.”

Since then, the operation has expanded to 14 different cities and universities around the world. At venues in London, Nairobi, and elsewhere, communities of hosts now lead teas. Bowen Lu ’16- ’17 launched the Harvard chapter of Tea with Strangers. Lu attended his own first tea during his gap year in San Francisco. According to Lu, the experience was “unstructured but so vulnerable,” with participants speaking about politics and religion. Hooked on the Tea with Strangers experience, Lu returned to campus last spring hoping to recreate that “atmosphere of vulnerability.”

Lu launched the Harvard chapter to improve a campus social experience he sees as a “twoway funnel.” He had observed that freshmen arrive on campus eager to meet other students, but quickly shut themselves off from new social experiences. By senior year, the funnel opens up again. “They realize that, ‘Wow, my time is coming to an end here. There are so many people I haven’t met,’” he says.

“Why isn’t there an avenue to continually meet new people in this community of fantastic people?” Lu wondered at the time. Through Tea with Strangers, Lu and other campus hosts hope to help make the Harvard social experience more like a cylinder. 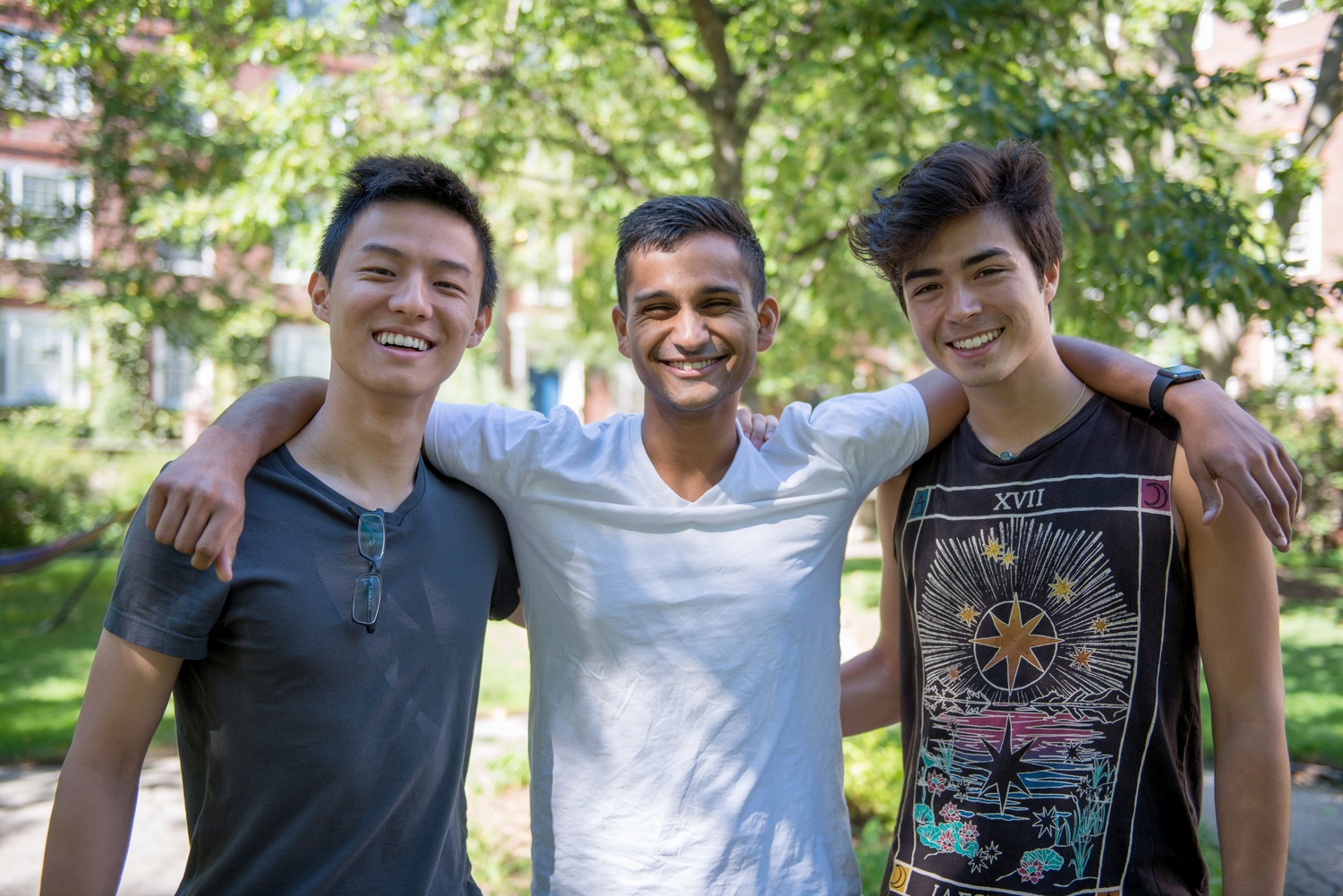 “There is not a single group of people that couldn’t make an amazing connection if they didn’t have the time and space,” said Tea with Strangers creator Ankit Shah, who poses with hosts Bowen Lu ’17 and Skip L. Rosamalia ’17. “Every new tea time I host is new for me… I come in with no expectations and no set structure. Every time it surprises me,” said Lu. By Alana M Steinberg
Advertisement

“I see the host’s role as definitely a facilitator, and not a leader,” Lu says. “Being a host is being a participant, an attendee of the tea time.” Yet, Lu says that it is the host’s responsibility to ensure that everyone is a present and comfortable member of the conversation.

Shah agrees, noting that hosting a tea requires a keen sense of social situations and a deep desire to bring people together. “A good host is someone who assumes trust, who assumes friendship with a person before they’ve met,” Shah says. While Shah vets potential hosts with these guidelines in mind, he stresses that the inclusivity fostered during a tea extends to the host selection process.

“I think there is not a single person that can’t be a fantastic host,” he says. “At the end of the day, being a great host is just listening. And it’s paying attention enough to ask a question because you actually gave a shit.”

At the Pfoho tea, the second ever hosted on campus, the conversation has taken a distinct turn. We move from telling stories to questioning the function and existence of luck, and whether events that occur are predetermined or happen by chance. We wonder if people simply believe what they want to believe because it would be too existentially distressing to think otherwise, and if believing in luck is a mere coping mechanism in a universe that we will never fully understand. We talk about books that have changed us and books that haven’t changed us. We imagine ourselves as the protagonists of the movie “Limitless,” faced with the possibility of unlimited intelligence and speed.

“What are your names again?” asks a participant across the table. The group shares a laugh. It is five o’clock, the end of our two hours together, and we realize how much and how little we know about one another. We don’t know each other’s concentrations or extracurricular affiliations, but it feels like we’ve become familiar with the inner workings of each other’s minds. We know what matters to each other, and what makes us tick.

“It’s weird that after this, we’ll all probably be strangers again,” adds another tea-time guest. There are general murmurs of agreement as we realize what an unusual experience this has been. Our host describes the two hours as “ephemeral.”

With waitlists piling up in venues around the world, Tea with Strangers is looking to expand its reach. In addition, Shah is interested in strengthening bonds within existing host communities. He hopes to create “an echo chamber of good intention,” where constant feedback will allow hosts to make teas even more inclusive, and thus encourage attendees to open up and get to know one another.

To Shah, a primary goal of Tea with Strangers is to make participants realize how similar they are, rather than dwelling on differences. “‘Strangers’ is so ironic,” he says. “Because there is no such thing.”