Former Faces of Men's Basketball Watch, Cheer on From Afar 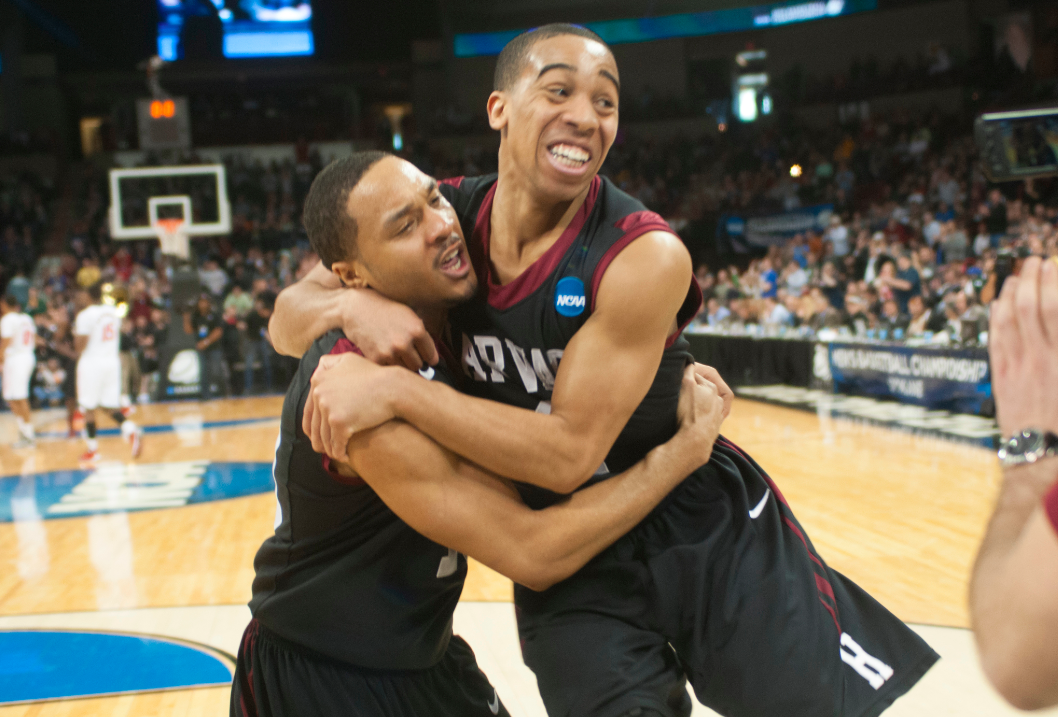 Former co-captain Brandyn Curry ’13-’14, left, was traveling through Holland when he heard the news that the Crimson was going to the NCAA Tournament once more. By Robert F Worley
By Jacob D. H. Feldman, Crimson Staff Writer

Brandyn Curry ’13-’14 was on a bus somewhere in Holland. His Dutch team had an 8 p.m.game (three EST) Saturday, so Curry was getting on the bus for an hour-long ride as Yale took a halftime lead over the Harvard men’s basketball team 3700 miles away in the Ivy League playoff game at The Palestra.

When the Crimson rebounded in the second half and eventually grabbed a nine-point lead, the former Harvard point guard breathed a sigh of relief. Ok, he told himself, this is good. Then he hit refresh on his Twitter app, and Yale scored. Another tap and another pair of Yale points.

Just a week earlier, Curry had watched as the Bulldogs held off Harvard in a crucial late-season matchup. Curry had watched all of the team’s Ivy games to that—staying up until 2 a.m. watching online streams—and constantly talked with the team’s current point guard, junior co-captain Siyani Chambers.

But after watching the Crimson lose control of its destiny with the loss to Yale, Curry could not watch the team’s Senior Night game the following night against Brown. He was too upset, and he had an early game the next day. Instead, Curry woke up Sunday morning to a dozen texts, including one from Chambers, explaining that the Bulldogs had lost to Dartmouth on a buzzer beater the night before—that Harvard’s NCAA Tournament chances were still alive.

“Only in the Ivies,” Curry said, who experienced that craziness himself when a Penn loss on the final day of the Ivy season in 2012 sent Harvard dancing for the first time in 66 years.

Fast forward back to Saturday’s playoff, and the Crimson seemed to be losing the opportunity Dartmouth had given them as Yale closed the gap in the game’s final minutes.

“The game was tied and I am refreshing like crazy,” Curry said. “I saw that Moundou-Missi missed a shot and they were trying to decide who it went off of. I’m sitting there just praying they are getting the ball. I refresh again and…”

All this time, Oliver McNally ’12 was playing in the championship game of a basketball tournament in Portland. The former Crimson guard briefly played professionally in Canada before moving to San Francisco to work in sales at a technology company.

While playing in the athletic club tournament, he got updates about the playoff game at every dead ball. Still, he didn’t see how the game ended until he pulled up the highlights on his phone.

When Curry saw that Moundou-Missi had hit the game-winning shot, he jumped up on the bus. The rest of his teammates, resting with their headphones on, all turned to look at him.

“Everybody was looking at me like I’m crazy, but oh well,” Curry said. “I had to explain to them that we were going to March Madness and they understood.”

Curry said he does not have any sympathy for the way Yale’s season came to an end, but McNally, a junior when Harvard lost to Princeton a buzzer-beater in the 2011 Ivy Playoff Game, felt otherwise. He said his first thought upon seeing the highlights was how happy he was for Harvard. But his second thought went out to the Bulldogs.

“I felt awful for the Yale kids and how it went down for them the last two weeks,” he said. “I was on the bad end of a buzzer beater in that playoff game and it’s an awful feeling.”

Curry could have those kinds of mixed feelings Thursday when his local North Carolina Tar Heels face Harvard (Curry went to high school in the Charlotte, N.C., area). He missed the selection show but got a text from former teammate and current assistant coach Christian Webster ’13 asking, “Who are you rooting for?”

Harvard, of course, Curry responded, but he said he was jealous that the Crimson had gotten the matchup, because he would have loved to play against one of his childhood teams.

McNally was more specific with his prediction. “We take care of the ball, limit UNC on the offensive glass and keep them on the perimeter where they go ice cold,” he said. “In the end, Harvard hangs on 59-57.”

Either way, both said they would be watching, wherever they are.