The masters of Harvard’s undergraduate residential Houses are discussing changing their shared title—one that some students criticize as associated with slavery and Harvard College Dean and Cabot House Master Rakesh Khurana says makes him personally uncomfortable.

“As someone who is responsible for and co-leads one of the Houses…. I have not felt comfortable personally with the title,” Khurana said last week.

Some students—including a group of Latino undergraduates who issued a list of demands to administrators more than a week ago—have argued that Harvard should change the title, given the implications of the word “master.” Debates about the equivalent position have raged at Yale and led to a change of the title at Princeton.

Khurana said the House masters, faculty members who oversee Harvard’s 12 upperclassman residences, are “deeply aware” of the issues associated with the name and have been discussing the title for “a while.” The recent release of a report on diversity at the College, which called for a wide range of reforms to improve the experiences of minority students, has further sparked conversation on the subject.

While Khurana acknowledged that the “master” title can be interpreted in various ways—such as etymologically—he said he also takes into account “the social meaning of words.”

“I know that language is powerful, and I think we have to be very conscious about how language is used,” Khurana said.

Khurana is not alone in his discomfort with the title. Two House masters—Christie A. McDonald and Michael D. Rosengarten, who oversee Mather House—have gone so far as to ask others to call them something different. McDonald and Rosengarten updated Mather’s website sometime before last week so that it listed them as “chief executive officers” of the House. That descriptor has since been removed from the site.

Rosengarten said he feels uncomfortable with the formal House master title and signaled approval for the conversation about changing it. “It’s refreshing to have a discussion about these things because it is so important and shows the sensitivity of the people who have these positions,” Rosengarten said. 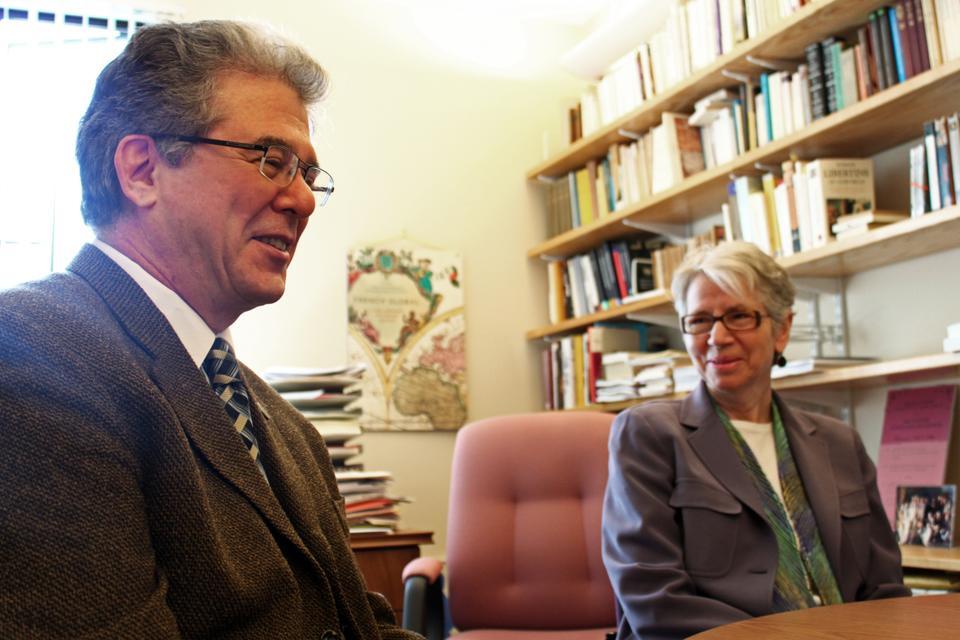 Michael D. Rosengarten, left, and Christie A. McDonald, current house masters of Mather House, pictured when they first took up the titles in 2010. By Keren E. Rohe

It remains unclear when, if at all, the “master” title will change officially, or to what. At Princeton, each residential college leader is now called a “head of the college.”

In an interview, Khurana alluded to the need to go through a formal administrative process for developing job descriptions and titles. He also said administrators are currently considering many recommendations made in the recent College diversity report, written by a committee led by Jonathan L. Walton, a professor at the Harvard Divinity School and the Pusey minister in Memorial Church.

While the diversity report did not directly call for a change to the House master title, it did emphasize the role House masters play in students’ minds as leading campus diversity efforts. Generally, it analyzed established institutional practices critically.

“Harvard College has a responsibility to promote a shared vocabulary among students around identity and difference, and to shift the optics of the campus from one that privileges particular histories and cultures to one that celebrates the diversity of the student body,” the report said.

The debate about the House master title is one of many ongoing conversations on college campuses about institutional names, especially those tied to now-controversial historical figures.

At Yale, in addition to the residential college master title, students have criticized the name of one student residence, titled after John C. Calhoun, a former U.S. vice president, white supremacist, and vocal proponent of slavery. A group of Princeton students, meanwhile, is demanding that the university change the name of a student residence and its public policy school to remove association with former U.S. President Woodrow Wilson, given his record of racism.

—Staff writer Noah J. Delwiche contributed to the reporting of this story.