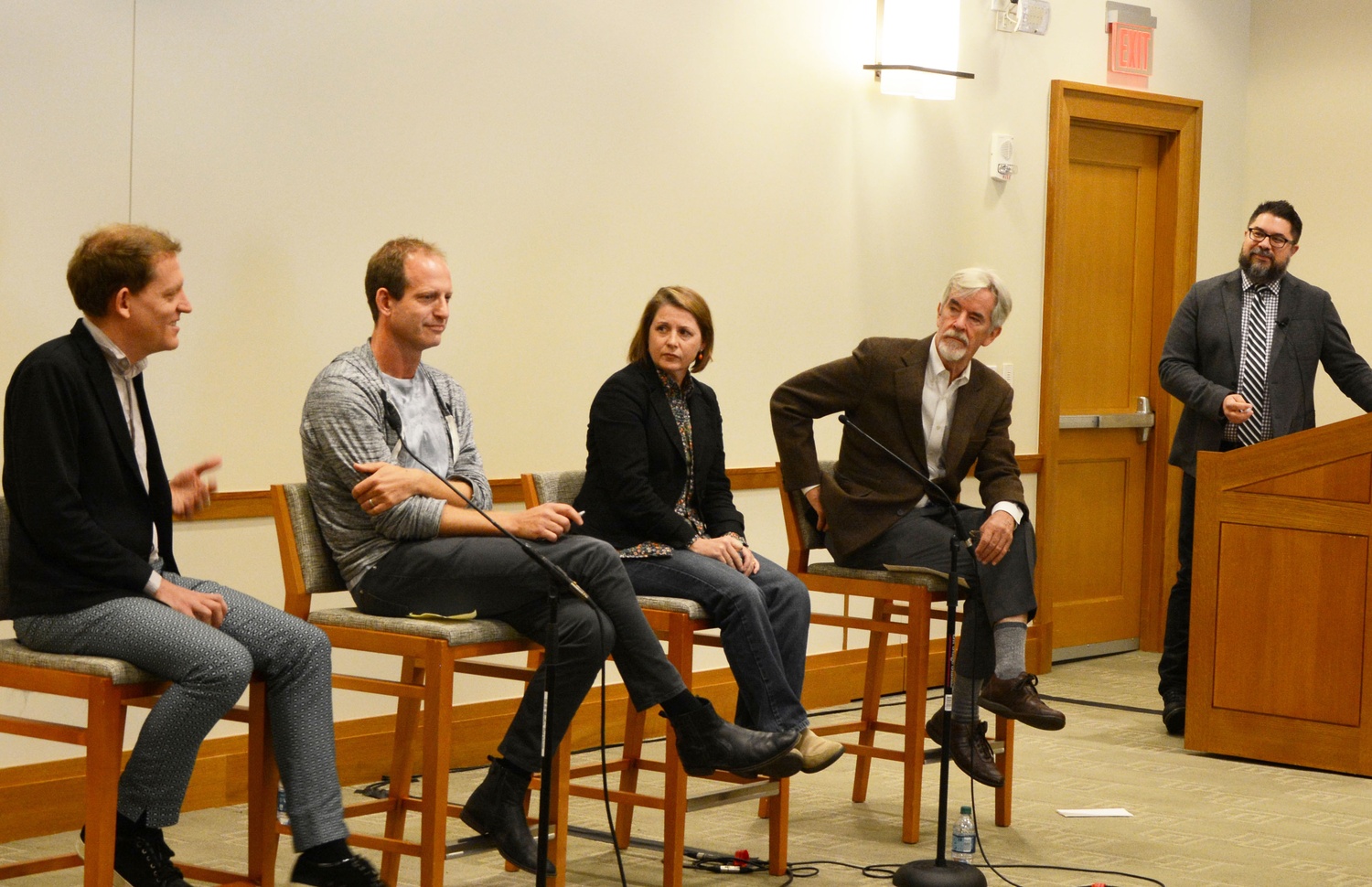 From left to right: Benjamen Walker of Radiotopia’s podcast Theory of Everything, Jake Shapiro and Kerri Hoffman of Public Radio Exchange, and Chris Lydon of Radio Open Source speak on the future of podcasts. The panel at the Law School on Tuesday was moderated by Berkman Center for Internet and Society’s Faculty Co-Director Christopher T. Bavitz. By Eliza R. Pugh
By Kier W. Zimmerman, Contributing Writer

Dubbing 2015 the “Year of the Podcast,” panelists at a Berkman Center for Internet and Society lunch discussion pulled back the curtain on the history of the digital media form and discussed its future.

Titled “State of the Podcast,” the panel is one of many events under the umbrella of HUBweek, a weeklong series sponsored by Harvard, MIT, The Boston Globe, and Massachusetts General Hospital.

Christopher Lydon, the host of Radio Open Source and a former Berkman Center fellow, began the discussion by reading a transcript from the first podcast he recorded more than 10 years ago about the medium itself.

“[A podcast] has the full range of human curiosity and passion about it. A lot of it is funny, feminist, futurist, cosmopolitan, confident, and all those other good buzzy things like edgy, enthusiastic, highly energized,” Lyndon said. “It’s everything I could have hoped for when I went into journalism.”

According to Daniel Jones, who co-hosts and produces the weekly Berkman Center podcast, podcast development commenced in the early 2000s, and Harvard affiliates like Lyndon played a prominent role in its early days.

Kerri Hoffman of PRX, an Internet marketplace for the distribution and licensing of public radio programming, added that although podcasts were originally tied to radio and broadcasting groups due the need for equipment, talent, and audience, podcasts are now beginning to cut those ties.

“In my opinion, the thread between public radio and podcasts doesn’t exist,” said panelist Benjamen Walker, the host of Radiotopia’s “Theory of Everything” podcast. “There is something to this actual medium itself. It’s different than radio. You can’t use the same tricks.”

Jake Shapiro, CEO of PRX and a former Berkman Center associate director, attributed the rise of podcasts’ popularity to the release of the iPhone.

“It took a second, then those of us in radio and broadcasting realized ‘Oh my God, those are radios,’” Shapiro said. “Mobile could finally fix the problem of audio being a bad fit for the internet. Podcasting was always possible, but now it was also viable. That really transformed the game.”

However, Lana Swartz, an attendee and current Berkman fellow who said podcasts represented a significant part of her “daily soundtrack,” raised doubts about the superiority of podcasts to public radio, a sentiment expressed by some of the panelists.

“When I lived in LA and commuted by car regularly, I listened to local radio, which made me feel truly connected to my community,” Swartz said. “Now that I live in a walking city, I’m listening to podcasts more and local media less, and so I find myself less attached to this community.”

For her part, Hoffman considers how podcasts can empower individual journalists and encourage large media corporations to evolve.

“It would be very horrible to live in a society where all media is controlled by a small number of corporations,” Hoffman said. “The podcast is a reminder to public broadcasting that they need to make better news, produce better shows, and stop being vanilla ice cream all the time.”