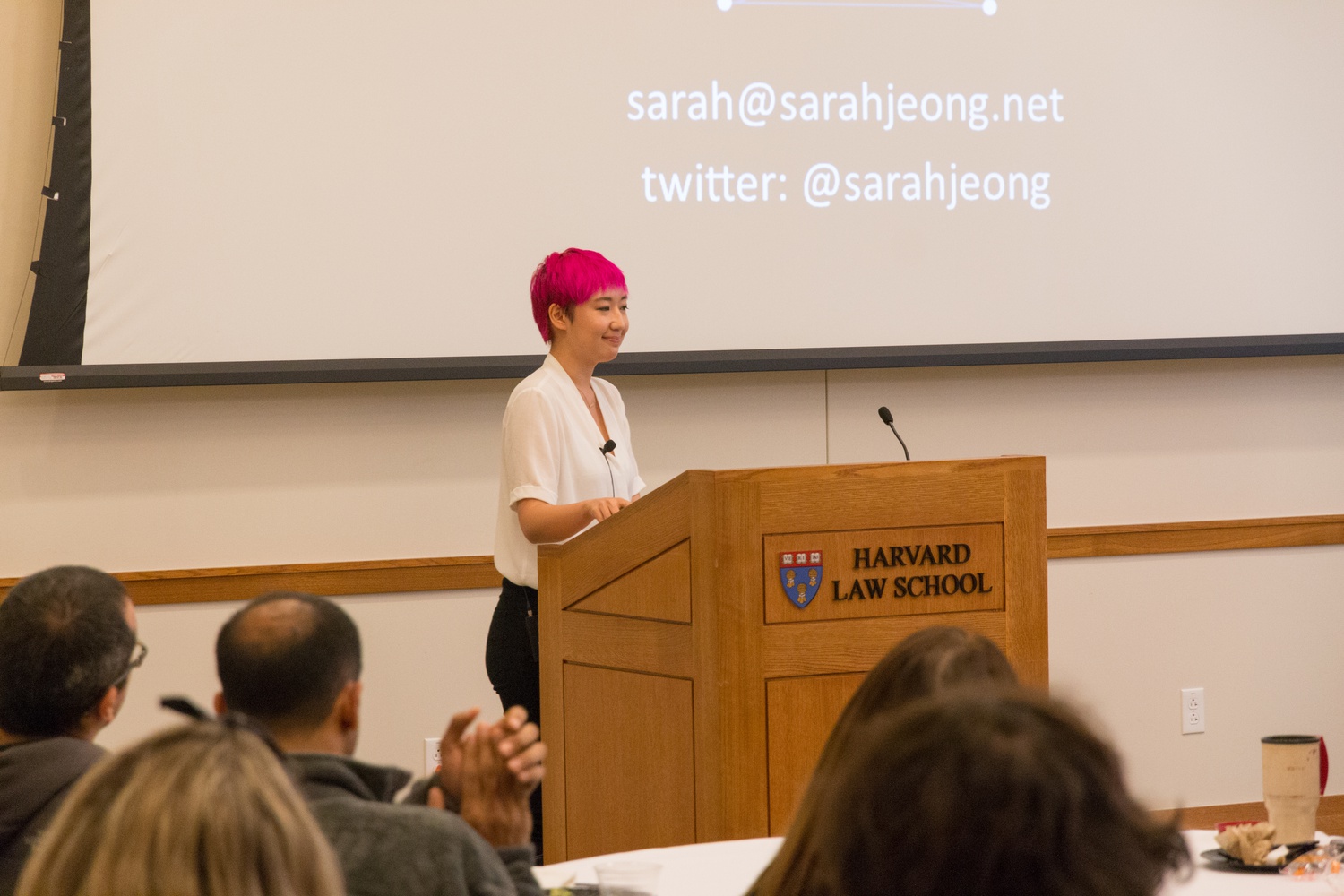 Sarah Jeong, the author of “The Internet of Garbage,” answers audience questions at the end of her presentation. Her presentation provided a perspective on online harassment, along with lessons and caveats. By George J Lok
By Marella A Gayla, Contributing Writer

Speaking about gender-based online harassment, Sarah Jeong, a journalist and graduate of Harvard Law School, argued for a more “compassionate architecture of the internet” at the Berkman Center for Internet and Society on Tuesday afternoon.

Jeong used her “Theory of Garbage” to discuss the things, including harassment, that disable the internet as an avenue of communication for certain groups of people.

Jeong outlined the issue of “inequality in participation on the internet” with studies showing the disproportionate amount of abuse women receive online.

In her talk, Jeong cited a survey that revealed 60 percent of cyberstalking victims are women. Jeong also discussed a 2006 study at the University of Maryland in which researchers planted “silent bots” in an Internet Relay Chat with gendered usernames. According to Jeong, female-named “bots” received 25 times more “malicious messages” than their male counterparts.

Although many studies focus on online harassment directed at women, Jeong explained that the problem extends beyond lines of gender.

“It’s really important to know that this problem is exacerbated on every single axis of social oppression,” Jeong said.

Drawing upon her time at Harvard Law School, Jeong discussed the shift in discourse from a focus on free speech to a focus on safety.

“I came to HLS in a time when the frame was still very focused around, ‘Free speech is good. Oppressive government is bad. We must protect the internet from these threats of interference of censorship,’” Jeong said. “And suddenly, the discourse was changing. And you were increasingly seeing these examples of women getting physically threatened off of the internet.”

Jeong said the change in conversation regarding gendered online harassment created a discourse built around a dichotomy of “free speech versus women,” a distinction she found “upsetting.”

Using the Theory of Garbage as a framework, Jeong discussed cyberharassment from a policy standpoint, highlighting the role of social media developers.

“Changes to user interface are not neutral. They will hurt some people and help some people,” Jeong said. “Sometimes they’re very, very political.”

Especially prominent is the “unfortunate” focus on deletion in managing harassment on social media, according to Jeong.

“We think in these terms of deletion and it gets us nowhere, because deletion isn’t victory, it’s not liberation, it’s not freedom from fear. It’s just deletion,” she said.

A “more productive direction,” according to Jeong, is one that focuses on “compassionate user interface” and other ante hoc solutions, rather than “post hoc reactive measures” such as deletion.

“If we can just design the architecture of the internet in a compassionate, egalitarian way, we can get someplace,” Jeong said. “Garbage is a speech issue, but we still take out the garbage.”