Wearing a bright pink skirt and a midriff top, Disha Verma ’15, president of the Harvard U.S. India Initiative, holds a sign that reads “This is NOT an invitation” over her chest. This bright photo of Verma standing tall is juxtaposed with an image of her sitting in a chair, fully-clothed in Indian traditional dress, holding a sign that reads “Does this make my message more meaningful?”

The photo appears on the Tumblr of the “emBODYindia” photo campaign, a blog launched to open dialogue about issues related to rape and sexual assault in Indian society by the Harvard U.S. India Initiative. After launching the photo campaign last Thursday—and garnering the participation of students, tutors, and Dean of the College Rakesh Khurana—some of the faces at the forefront of the campaign explained their inspiration for appearing in the Tumblr. 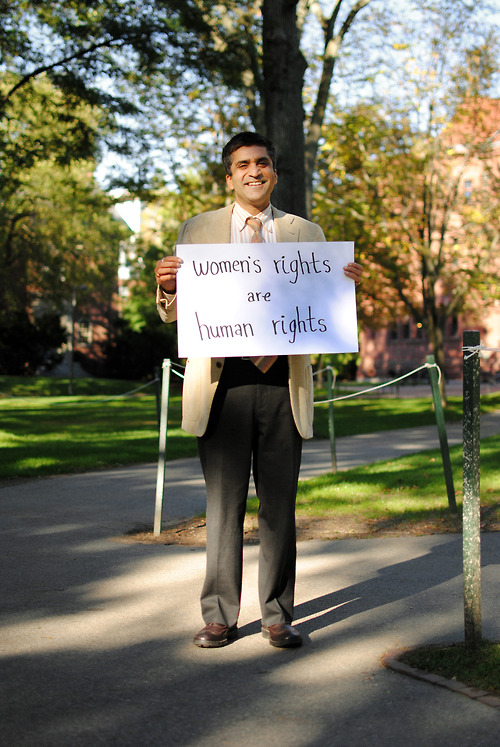 #emBODYindia - Dean Rakesh Khurana holds a sign that reads "women's rights are human rights" as part of the #emBODYindia campaign. 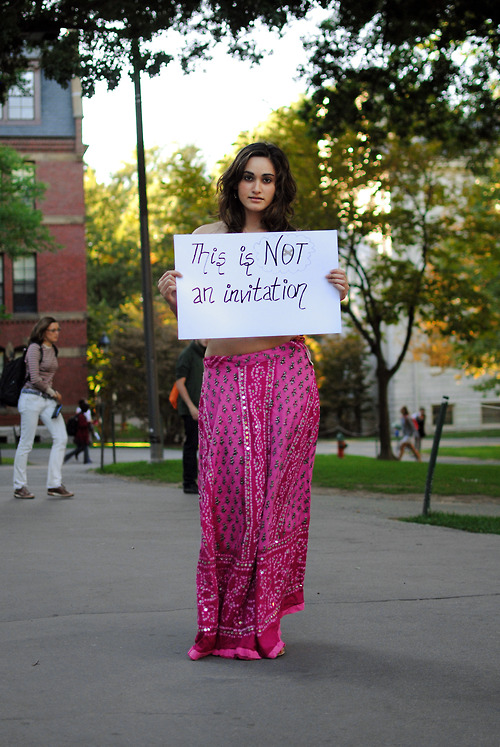 #emBODYindia - Disha Verma, one of the organizers of emBODYindia and co-author of the original post, has gained attention from multiple media outlets which have wrongly claimed she went topless for her image in the campaign. 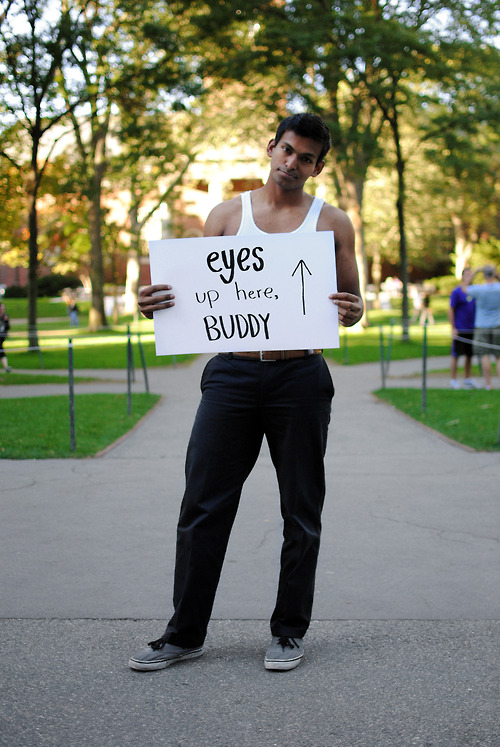 #emBODYindia - A '15 college student holds a sign for the #emBODYindia campaign. The project features both male and female members of the Harvard community, and seeks to combat the unwanted sexualization of women in India. 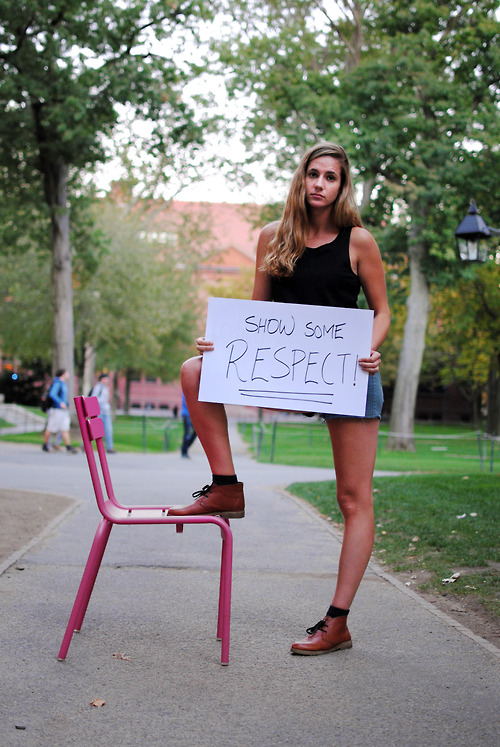 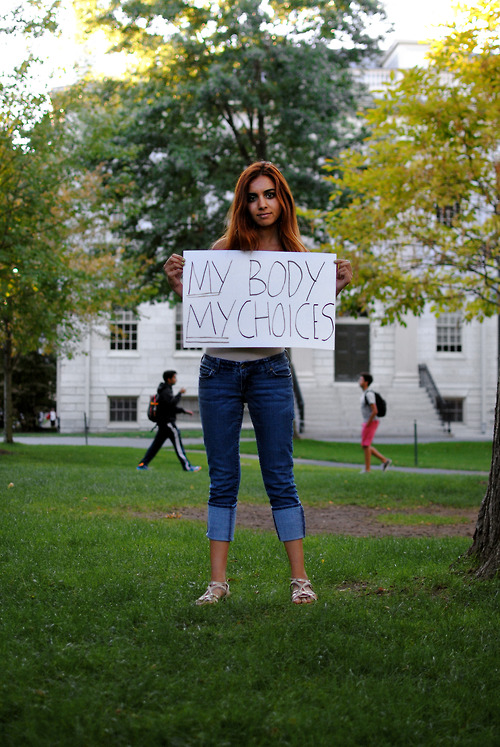 #emBODYindia - A college sophomore poses in Tercentenary Theater for the #emBODYindia campaign. 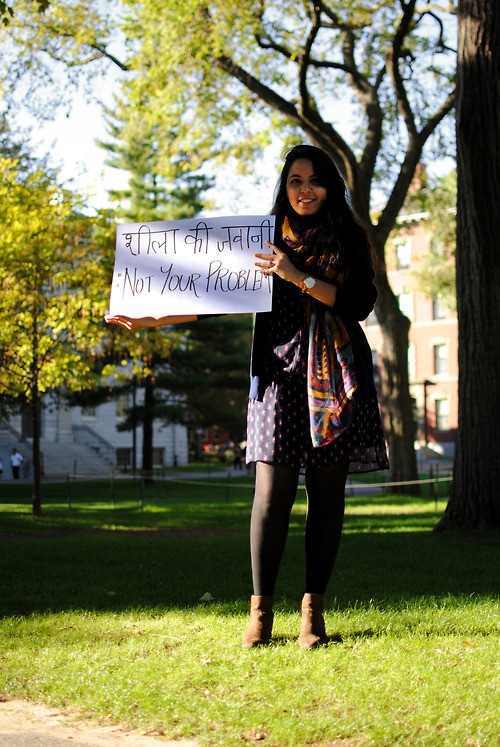 #emBODYindia - Students from all over the university are featured in the campaign. This image is of a student from the Graduate School of Design. 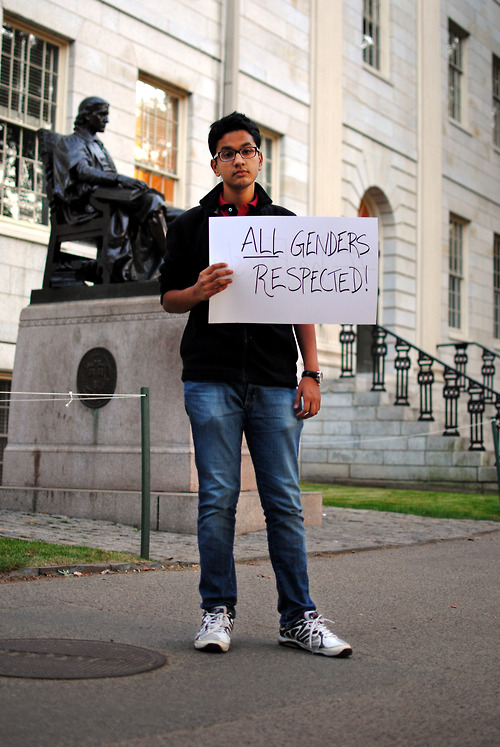 #emBODYindia - Another student posing for the #emBODYindia campaign by the John Harvard statue.

More so in India than in the west, a woman’s character is judged by her clothing choice, said Upasna Sharma ’15, one of the participants in the emBODYindia campaign.

Holding a sign that reads "not needed: your value judgement," Sharma wears a white t-shirt and blue shorts in a photo for the campaign—an outfit that she said she would feel uncomfortable wearing on the streets of her native New Dehli.

Expressing similar sentiments, Verma said that how you dress in India is a real safety issue for women.

“One of my favorite parts of coming to the U.S. is that I can stop worrying about what I'm wearing,” Verma said. She added that she leaves most of her clothes at Harvard when she returns home to New Delhi during school breaks. She said she worries that they would attract too much negative attention.

"The vast majority of Indian society thinks that if you dress scantily, you are inviting criticism. What you wear does not ever equate to an invitation," she said.

Aditya Agrawal ’17, one of the many male students involved in the photo campaign, said the photos are a response to systemic issues of female objectification and sexual assault in India.

"There is a societal dysfunction in India where women are always in [the] possession of someone else," he said. "A large population of Indian men feel entitled to a woman's body."

Agrawal, who is from Lucknow, India, said rape is so common in his city that it doesn't even make the pages of his local newspaper.

The photo campaign aims to change the pervasive mindset in India that leads to objectification and violation of women, organizers said, opening dialogue in India about taboo subjects surrounding sex.

"In India, the blame is always on the woman, not the person objectifying the woman," Sharma said. "It's often [perceived as] our fault for provoking behavior."

The Harvard U.S. India Initiative is in the process of collaborating with students from around the world—as well as with a national campaign for women’s rights in India called No Country for Women—in the hopes of building long-term impact in changing Indian attitudes towards women.

While the photo campaign is primarily targeted toward the audience in India, Verma said the campaign transfers well to Harvard's campus and that it "struck a chord" with many women at here.

"The final clubs are very gender segregated. When they're deciding 'should we let her in or not', they're basing it on her looks," she said. "In a situation where girls have to line up to gain access, an environment of objectification is sadly bound to ensue: different symptoms, same problem. "

—Staff writer Selina Y. Wang can be reached at selinawang@college.harvard.edu.