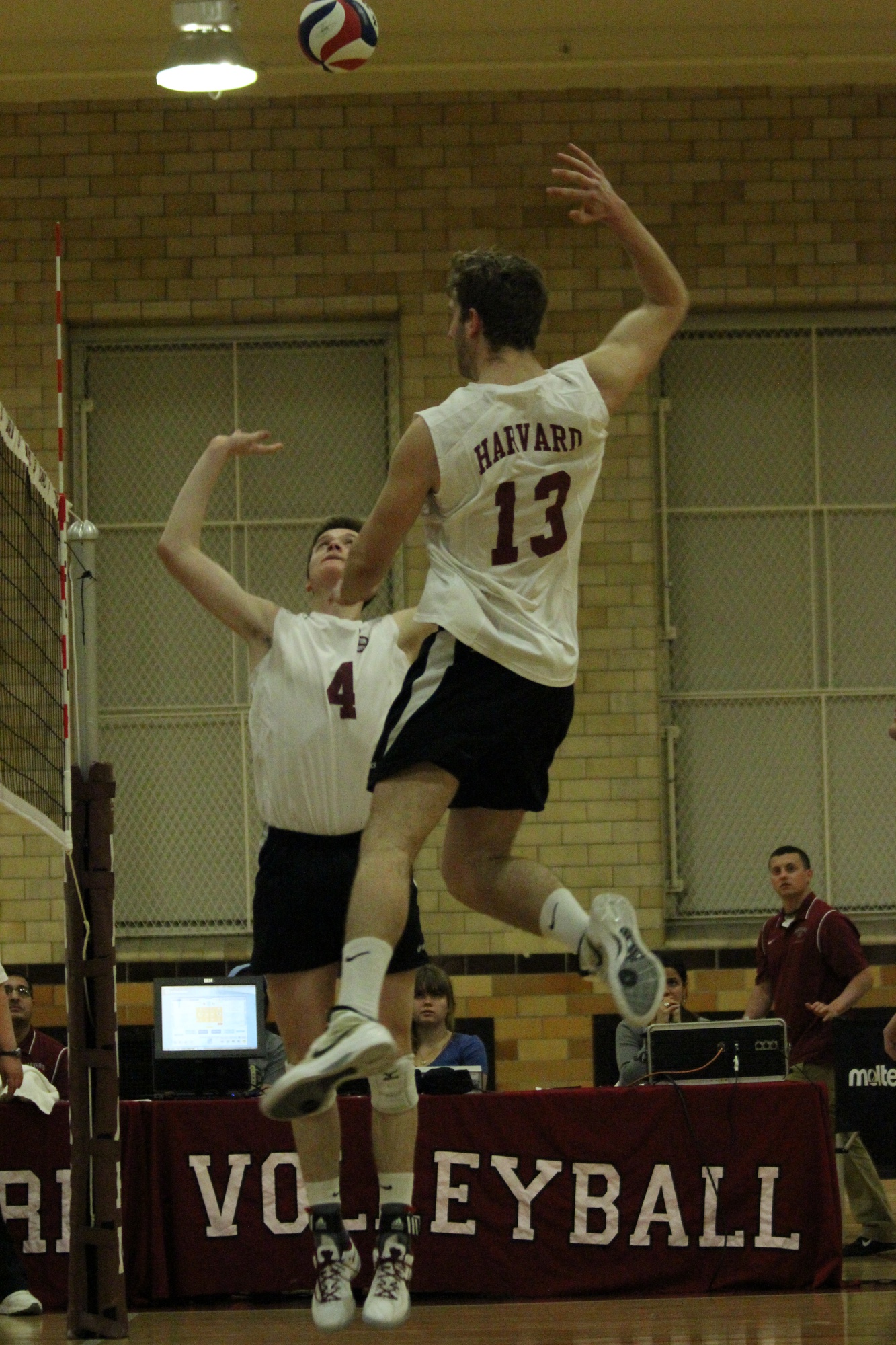 Senior middle blocker Kyle Rehkemper, shown here in previous action, will spearhead the Crimson offense against Princeton on Thursday. Harvard has defeated the Tigers twice this season, and a victory over its conference rival will propel the Crimson into the EIVA championship game.
By Julian Ryan, Crimson Staff Writer

For the Harvard men’s volleyball team, the season comes down to this. The EIVA conference playoffs held at Penn State represent the culmination of the Crimson’s year and an opportunity to end what has thus far been a successful season on a positive note.

Harvard (15-7, 11-3 EIVA) will play its first round matchup on Thursday against longtime rival and conference foe Princeton. The two teams met twice in the regular season, and both matches went the full five sets. The Crimson emerged victorious both times, but this will be the first time the two programs have ever met in the playoffs.

For the seniors who have spent four years in close games with the Tigers, battling one more time against their biggest rival certainly adds something special. The fact that Harvard coach Brian Baise was himself a Princeton undergrad once upon a time makes the occasion even more exciting.

“I’m definitely excited to play Princeton in the first round,” co-captain Nick Madden said. “It’s been a very good four years of playing them. There have been some great battles, and as a senior class, it seems like a good way to end our careers.”

The Tigers’s primary strength lies in their high-flying offense. Behind only Penn State, Princeton has averaged 12.81 kills per set at a very credible efficiency of .306 in conference play this season. Three of Princeton’s hitters were named to All-EIVA teams this week, signifying the quality of the Tiger offense.

Junior Cody Kessel is the focal point of Princeton’s attack. The outside hitter has followed the same career path as Crimson offensive stalwart DJ White, with both coming into the league three years ago and both having made three consecutive All-EIVA first teams. Both Kessel and White rank in the top five hitters in the conference by kills per set.

Princeton senior Pat Schwagler has also had a large impact in the meetings with Harvard this season, while the Tiger defense kept White fairly silent considering his own high standards. Kessel and Schwagler had 30 and 38 kills, respectively, in the matchups this season compared to White’s 19.

Despite the Crimson’s victories in those games, Baise believes that keeping Kessel and Schwagler in check will be very important.

“Our defense is going to be key,” Baise said. “We need to slow down their two best players. For us to win, we have to keep their offense in check and hope that our offense does its job.”

The Harvard defense has certainly been up to the task this season, leading the league in digs with 11.02 per set in conference play. A large part of that load has been shouldered by co-captain libero Chris Gibbons. The senior’s 15 digs in the away game at Princeton was a large factor in the victory.

While every contest is uncertain, Harvard-Princeton matchups have consistently gone down to the wire. In the past four seasons alone, six meetings have gone to five sets. The stakes have never been greater than on Thursday.

“We’re definitely taking one game at a time,” Madden said. “We’re going to lay everything on the line to get past Princeton. It’s going to take some good serving, some good passing, and some aggressive defense to make some plays at the net.”

For the team that survives the first round, a meeting with Penn State likely awaits in the finals, unless George Mason pulls off an upset. The Nittany Lions have had an iron grip on the conference of late as they seek their sixteenth consecutive title. The No. 12 ranked team in the nation, Penn State dropped only one conference game against Princeton and will also have home court advantage.

The Nittany Lions beat Harvard twice in straight sets in the regular season, in games which were closer than the scoreboard suggested. The Crimson would no doubt love the opportunity for a bit of revenge.

“If we get to Penn State on Saturday, we have a pretty good shot,” Madden said. “They beat us twice, and we might have a little bit of a chip on our shoulder. We’re gonna take them down.”

Playoffs inspire the highest level of competition, and this weekend promises to bring out the teams’ best volleyball of the season. Harvard has never won the EIVA, and with such a strong senior class graduating, it may not have a better chance for a while.

“When we’re playing really well, our offense is really tough to stop,” Madden said. “We have weapons in the front and the back row at all times. When we’re passing well and we’re on the net, it’s real tough to stop us. If we get into the rhythm and we start gelling this weekend, it’s going to be a good weekend.”

—Staff writer Julian Ryan can be reached at jryan01@college.harvard.edu.