The World of "Divergent" 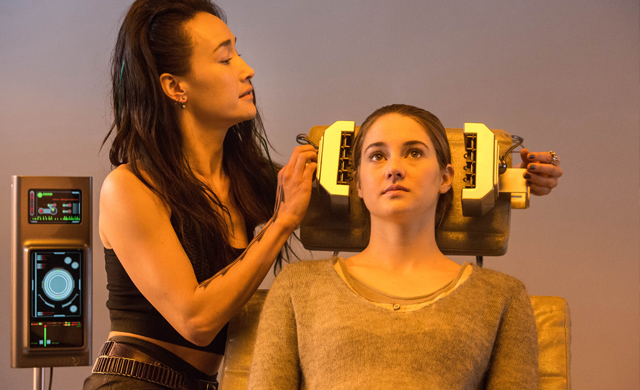 Maggie Q plays a supporting role in "Divergent," the film adaptation of Veronica Roth's YA novel.
By Leanna B. Ehrlich, Crimson Staff Writer

Actors Maggie Q and Mekhi Phifer are really excited for you to see their new film “Divergent.” “Wasn’t it fun?” asks Q, equally effervescent and demanding. “I really had an experience and I gave a shit about everyone in this. I wanted to see the second one yesterday.” Phifer couldn’t agree more: “It’s a fun ride.”

The pair play minor but significant supporting roles in the upcoming adaptation of Veronica Roth’s novel “Divergent,” which takes place in a crumbling, futuristic Chicago. The city’s inhabitants, who are divided into five factions that represent choice human virtues, are separated from the rest of the world for unknown reasons. 16-year-old Tris Prior, played by Shailene Woodley, trades in selflessness for bravery when she leaves her birth faction Abnegation for Dauntless.

It is here that Q and Phifer step in. As tattoo artist Tori, Q plays an unwilling mentor to Woodley’s character once she joins the Dauntless faction. In some ways, Q is used to this role: she spent four seasons starring in the television show “Nikita,” where a central aspect of her character involved training a younger colleague. Yet “Divergent” offered a new set of challenges for a familiar role. “I played a mentor on my show, but I was the mentor that was willing and able and eager, and my student was a little resistant to it. [‘Divergent’] is the opposite. I’m the unwilling mentor, and she’s after me trying to get information.”

This unexpected complexity attracted both Q and Phifer to the movie. “[Tori] is like, ‘I just do tattoos, like get out of my face! I don’t want to be in your world because I know that world and it’s not okay,’” Q says. Tori’s dark back-story is hinted at in the film, but much of her complexity remains to be seen. “We looked at the roles as a base to build from to the next and the next film. And that’s what made it interesting for me.”

Phifer agrees. “I’m looking forward to see what [film] two brings to the table,” he says. “This is [my and Maggie’s] first time doing a film that involves sequels. It’s interesting to see the character arc and where it’s going to go.”

Phifer plays Max, the leader of the Dauntless faction. “I like that Max is a leader,” Phifer says. “But what I like most about it is that there’s an unknown. There’s an X factor. I have to see where they go, where they take him. And that’s what I like, exploring the unknown with who Max is and who he’s going to be.”

Such is the benefit of sequels: “Divergent” is the first of a trilogy. It was released March 21, with the next two planned for release at one-year intervals. “There’s a history for all these characters that we’re going to explore soon, which is really nice,” Q says. “I really get to mess Kate [Winslet, the villain] up in the next one. We’re going to have a little more physicality, so that will be fun.”

Yet Phifer and Q are confident that “Divergent” has delivered a thrilling adaptation that stays true to the book’s spirit.  “There’s a certain amount of artistic license that you’re giving when you do adaptations,” Phifer says. “Obviously we can’t quote the book word for word. We have to sort of tweak it a little bit. I think people will be pleasantly surprised and pleased from the book to the film adaptation, what our creative forces put together.”

“A good indication too is that Veronica [Roth] was really happy,” Q says. “She was on set a lot, and she was really supportive of the process”—even when that process meant altering her dialogue to better suit the big screen. “The sides I got when I was reading with Shai for the role, it was funny because it was dialogue really taken from the book,” Q reveals, laughing. “People don’t necessarily speak that way, in novel-language. It is different. That’s why adaptations are so important.”

In the end, though, the entire team crafted a believable dystopian world on screen. “The production design, the effects, the costumes, it all worked together,” Q says. “It nicely dovetailed to make this world really believable.”

So believable, in fact, that Q and Phifer could see themselves belonging in this world.“[Dauntless] are the more carefree, edgy, fun, no-inhibitions kind of folks,” Phifer says. “You see them catching the train, see them climbing up stuff, running and jumping, and [stopping], dropping, and rolling and they shoot guns. If I had to choose a faction, that would be the faction I think I would go with.”

Q agrees with the appeal of the Dauntless lifestyle. “It’s reckless, and when do we ever get to celebrate that part of our personality? In this world, that celebration becomes its own faction, and they are a specific group of people who are security, police, border control. They’re the protectors, and so that recklessness has a place in this society. They’re all nuts, but it works.”

Phifer, however, has changed his mind. “I’d be Divergent,” he says: those who, like Tris, possess characteristics of more than one faction and thus pose a threat to the carefully controlled system.

Q is quick to point out that you’re supposed to say that. “Isn’t that the goal, really? You think of the metaphor for life. We all want to be all things, don’t we, in some sense.”