Confident Crimson Ready For the Spotlight 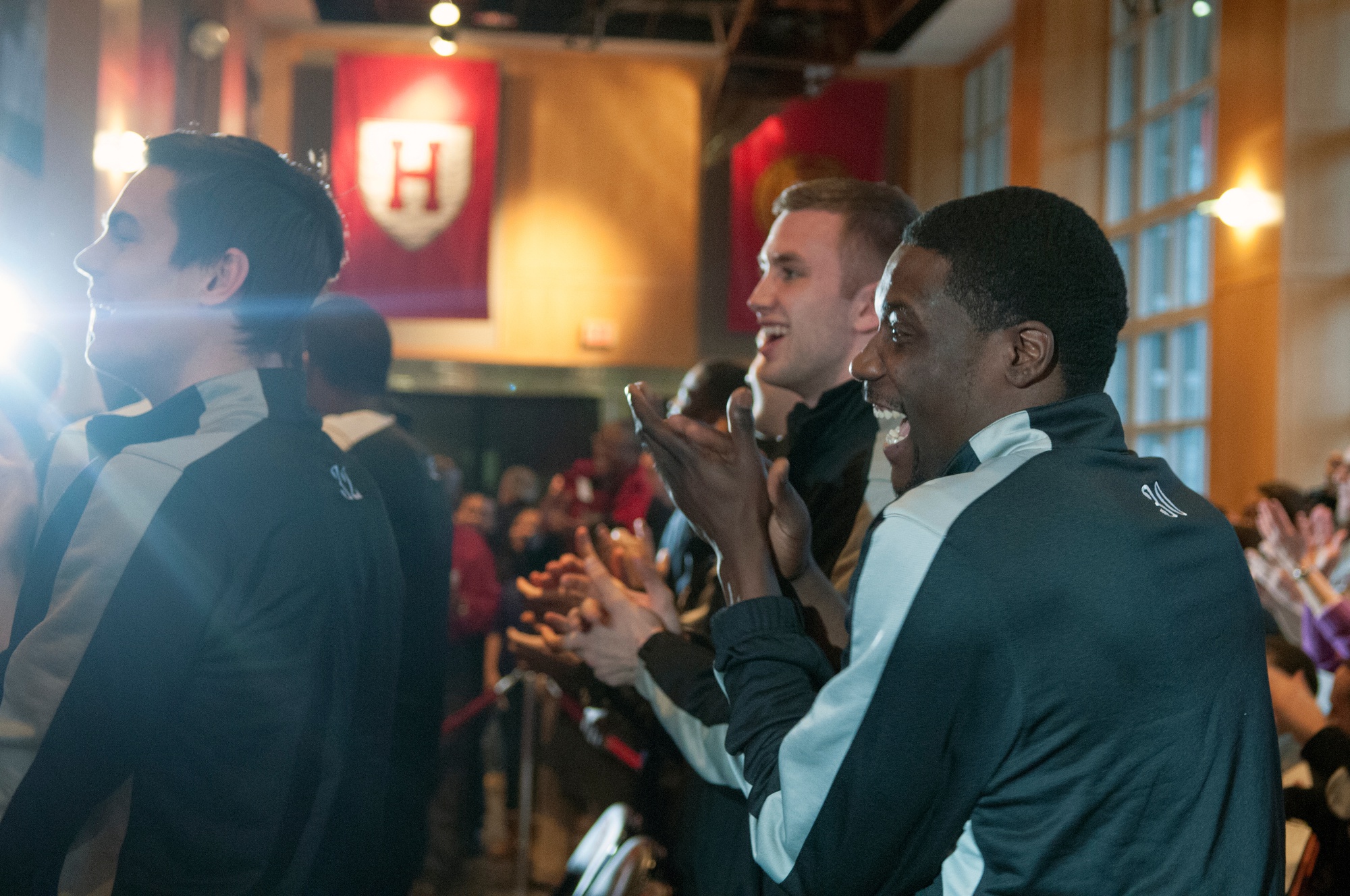 Pictured above on Selection Sunday, the Crimson men's basketball team is ready for its second-round game against Cincinnati.
By Andrew R. Mooney, Crimson Staff Writer

SPOKANE, Wash.—“Relief” was the word sophomore point guard Siyani Chambers used to describe the feeling for the Harvard men’s basketball team (26-4, 13-1 Ivy) after it wrapped up its fourth consecutive Ivy League title. The exhausting work of meeting expectations was over.

Now, as it enters its opening game in the NCAA tournament Thursday afternoon against Cincinnati (27-6, 15-3 American Athletic Conference), Harvard has a chance to re-assume the exciting identity of the underdog—and relief has given way to a different feeling.

“It’s replaced by a newly-found hunger,” Chambers said. “We’re trying to go out here and get a victory. So we have to go like we were chasing the title in the Ivy League, we have to go with the same mentality, the same effort towards getting this victory.”

A season ago, Harvard gave college basketball fans one of the most memorable games of the NCAA Tournament in upsetting heavily favored New Mexico. This year, Harvard’s status as an underdog is not as certain; the Bearcats are favored to win by just 3 points, according to ESPN.com, and several national college basketball analysts picked the Crimson to advance to the Round of 32.

The buzz surrounding Harvard may have caused observers to overlook a very talented Bearcat team. But according to Cincinnati senior guard Sean Kilpatrick, that kind of disregard is something his team has learned to ignore.

“It’s nothing new, we’re used to it,” Kilpatrick said. “We’re so used to being counted out throughout the regular season that now it’s something that’s like second nature towards us. We don’t take it [any] type of way.”

The Bearcats enter Spokane having earned a share of the newly-formed American Athletic Conference’s regular season championship. Cincinnati’s last game came in the semifinal of the AAC Tournament, a 58-56 defeat to Connecticut.

Keying the Bearcats on offense is the first-team All-AAC performer Kilpatrick, who averages 20.7 points per game. Kilpatrick, the second-leading scorer in Cincinnati history, is by far the highest-volume shooter on his team, attempting nearly 15 field goals per game; the next closest is senior forward Justin Jackson, with 8.7.

“I don’t know that you can stop [Kilpatrick], so we’ll do our best, obviously, to see how well we can guard him and defend him,” Amaker said. “It’s going to take a team effort. There’s not one matchup or one person that can be, or will be, responsible for that.”

But offense is not what earned the Bearcats its fifth seed. Cincinnati plays a low-scoring, methodical style, ranking in the bottom 50 in the country in number of possessions per game. Rather, the Bearcats were carried all season by, in Amaker’s words, a “very tough, very physical” defense that complemented that style. Cincinnati has allowed the sixth-fewest points per game in the country this season and the 10th-fewest points per possession. At the heart of that defense is the 6’8” Jackson, who earned AAC Defensive Player of the Year honors after averaging 2.9 blocks per game.

“You look at their team through the years, they have always been known, in my opinion, for a blue collar, tough, hard-nosed brand of basketball,” Amaker said. “So we anticipate that, that’s what we have seen on film.”

UConn was the two teams’ lone common opponent this year; the Crimson lost a tight 61-56 contest in Storrs, while Cincinnati split two regular season meetings before its AAC semifinal loss to the Huskies. But, according to junior guard Wesley Saunders, there is not much to learn from looking at those games.

“It’s obviously different personnel and different matchups on the court,” Saunders said. “I don’t think that them losing to UConn two out of three games really affects our matchup with them. So I think we’re just going into it like it’s our first time playing them, like it is.”

This is no longer the wide-eyed Harvard team that fell to Vanderbilt in the 2012 NCAA Tournament or the relatively inexperienced squad that recorded a stunning upset over New Mexico. At Wednesday’s media conference, the assembled Harvard players projected an assured attitude, aware of the task in front of them but confident of their ability to accomplish it. Simply making the tournament is no longer enough to satisfy the Crimson that it had a successful season; co-captain Brandyn Curry said that the team believes it can advance.

“When we tip it off tomorrow, we’re definitely going to come ready to win,” Curry said. When we get out on the floor, we expect to beat our opponent. And our next opponent is Cincinnati. So that’s our focus, beating them.”

—Staff writer Andrew R. Mooney can be reached at mooney@college.harvard.edu.