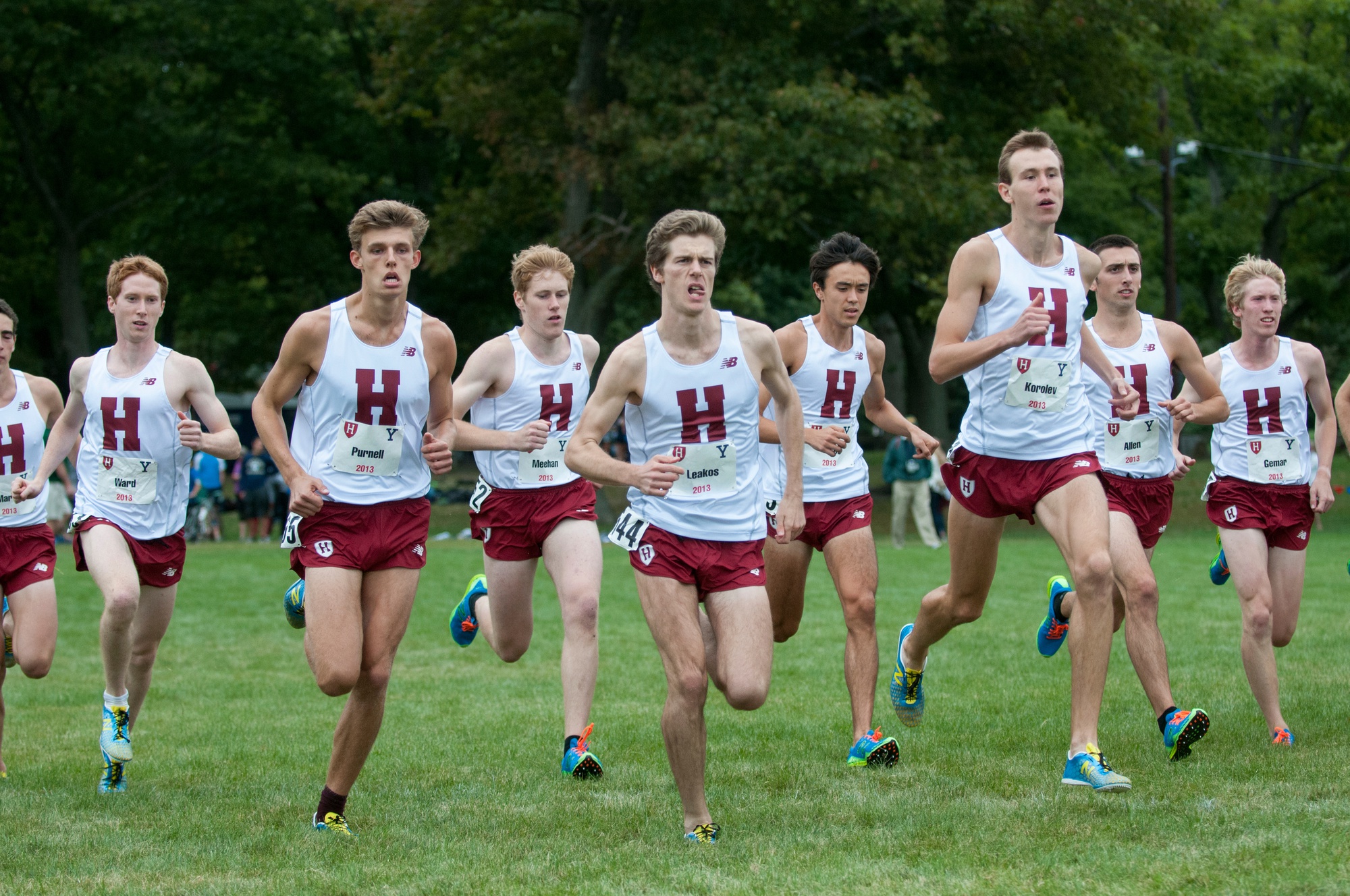 With seniors James Leakos (second from left) and Maksim Korolev (second from right) leading the way, the Harvard men’s cross country team swept the top five spots for a perfect score of 15 against Yale on Saturday.
By Dominic Martinez, Crimson Staff Writer

From the sound of the gun, the men’s race of the Harvard cross country team’s season-opener against Yale was effectively a competition for third place.

Crimson seniors James Leakos and Maksim Korolev took control of the race from the start, opening up a 10-second lead over the rest of the pack in the race’s first mile. Leakos finished in first place with an 8k time of 23:32, good for a pace of 4:44 per mile.

Korolev fell back in the last two kilometers of the race, but comfortably finished in second place, crossing the finish line in 23:50.

“The race went really well,” said Leakos, who won the Harvard-Yale meet during his sophomore season and took second place to Korolev last year. “We stuck to the plan—we went out really hard and made them hurt early, strung them out, and just kind of ran away on them.”

The Harvard men turned in a perfect score of 15 at the dual meet, with the team’s five scoring runners taking the race’s first five spots. The Crimson women’s squad also topped the Bulldogs, 20-39.

“It was an exciting opener for the team,” said junior Viviana Hanley, who won the women’s race. “We had a pretty good pack, which was our goal. Coming off last year, when we didn’t have a great opener and Yale beat us pretty hard, it’s really nice to come back to our home course and reverse that.”

In the men’s race, sophomore Tom Purnell led the pack that followed Leakos and Korolev. At about the midpoint of the men’s 8k course, Purnell separated himself from the field into a comfortable third-place finish, leaving senior Kurt Ruegg and junior Will Geiken to compete with Yale’s Alex Conner for fourth and fifth place. Both Ruegg and Geiken were able to pull away from Conner down the stretch, securing the sweep for the Crimson.

“The strategy was for me and [Korolev] to take off and run a really solid first mile, open it up a little bit, and see where it went from there,” Leakos said. “It’s wonderful having [Korolev] as a teammate. I was training with him over the summer, and it’s the best thing in the world having a teammate as good as he is.”

The victory is the third consecutive win for the Harvard men over the Bulldogs. When the Crimson lost to Yale four seasons ago, during Leakos’ freshman year, he fell during the race and sustained a concussion.

“We were coming into that race [four seasons ago] having won the last few years and we blew it,” Leakos said. “For me, that’s when the [Harvard-Yale] rivalry really started. We swore that that was never going to happen again, and we dreamed of the time when we would sweep them. And today, finally after three years, we have.”

On the women’s side, Hanley pushed the pace early and held a roughly five-second lead throughout the race. Senior Morgan Kelly was battling Bulldog senior Liana Epstein for second place until the final stretch, when Epstein pulled away and nearly caught Hanley. Hanley covered the women’s 5k course in 17:56, with Kelly close behind in 18:02.

“I don’t usually front-run, so it was a little nerve-wracking,” Hanley said. “I wasn’t really planning on it—our coach said, ‘Don’t go out too fast,’ but I felt good, so I was just telling myself, ‘Don’t look back, just go.’”

Rounding out the top-five for Harvard were freshman Madeleine Ankehlyi, junior Jennifer Guidera, and freshman Sarah Gillespie, who finished in fourth, fifth, and seventh places, respectively.

A large contingent from the Crimson track and field team showed up at the meet, which was held at Boston’s Franklin Park, to support their teammates. The Harvard-Yale dual meet is the squad’s only home meet, and the location alternates between Boston and New Haven each season. Saturday’s meet was the 100th installment of the storied rivalry.

“It’s a big deal to have the rest of the track team here,” Hanley said. “My roommate biked over, and I’m local so my dad was here, and so was my high school coach. It makes a huge difference; it’s incredible to have the support.”