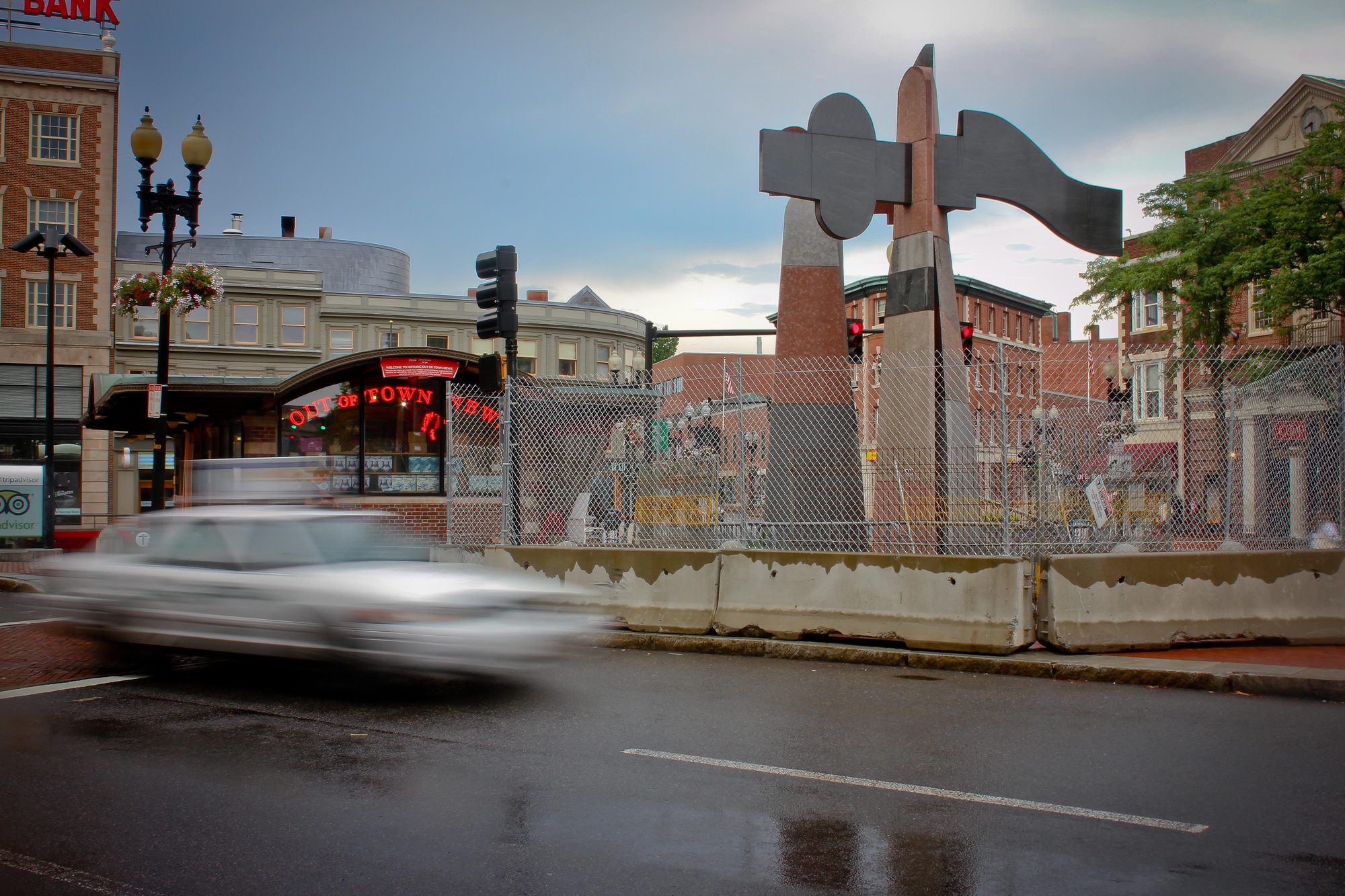 Underfunded and Overlooked: The Plight of a Harvard Square Sculpture

Few students, if any, glance up and notice the massive, multi-colored stone sculpture that towers over Out of Town News—one they pass nearly every day.
By Aemilia M. Phillips

It’s a hot September morning in Harvard Square, and the sidewalks are clogged as students dodge traffic on the way to the Yard, their eyes glued to their smartphones. Few, if any, glance up and notice the massive, multi-colored stone sculpture that towers over Out of Town News—one they pass nearly every day.

“Honestly,” said Dylan J. Peterson ’17, “I hadn’t really noticed it until you pointed it out.”

The sculpture, created by former Harvard professor Dimitri Hadzi and entitled  “Omphalos,” was installed in the Square almost 30 years ago. But now, a combination of structural concerns and a high price tag for repairs means that the sculpture may soon be relocated or demolished, a change to the face of Harvard Square that is passing largely unnoticed on campus.

According to an article published in the Boston Globe in late August, “Omphalos” was commissioned in the 1970s through a partnership between the MBTA and the Cambridge Arts Council called “Arts on the Line.” However, its iconic place in Harvard Square was called into question when a large stone section of the sculpture broke off two years ago, raising safety concerns. Metal fencing now surrounds the sculpture and the MBTA, which owns the statue, estimates that repairing “Omphalos” will cost around $500,000—a price it says it cannot afford.

Before being contacted for this story, Eric R. Brewster ’14, a visual and environmental studies concentrator, was unaware of the precarious position of “Omphalos.” And although he recognized the sculpture’s “Harvard-oriented” legacy, he said that it is difficult to draw the line between what Harvard should protect and what it shouldn’t. “Every shrubbery in Harvard is a monument in its own way,” he said.

“It’s sad to see it go, but that’s [part of] a natural process of ebb and flow in the art world,” Brewster added.

Walking by the sculpture this week, Morgan E. Henry ’14 pointed out the unsightliness of the fencing. According to Henry, the removal of “Omphalos” could be good for Harvard Square. “It’s better that this piece is removed,” she said. “It’s been behind that fencing for so long.”

Some students, though, claim that the sculpture is relevant and, indeed, central to Harvard Square’s landscape. In a Crimson editorial out Tuesday, David R. Grieder ’14 encouraged students to pay more attention to the many works of art scattered throughout the Square. “It’s hard to think of many places more appropriate for [“Omphalos”] than Harvard Square,” Grieder told FM. “‘Omphalos’ is connected to Harvard in ways people would never know.”

Still, Grieder said that most people walking through the Square tend not to appreciate the piece, or even to give it a second thought. “Maybe they don’t notice it because of the metal barricades,” he said.

Yohann Sequeira ’17, another passerby this week, seemed to fit Grieder’s description. “I have no clue what it is,” Sequeira said, though he added, “clearly there’s a lot of effort put into it.”

Cynthia Hadzi, widow of Dimitri Hadzi, was first made aware of the sculpture’s potential demolition in late June, when an MBTA representative informed her of the plans. Dismayed, Cynthia Hadzi began making calls to see if she could find a way to repair the statue, and keep it in Harvard Square.

The MBTA offered Hadzi a 90-day waiver, she told FM, postponing the demolition while she tried to raise the necessary funds. But Cynthia Hadzi was unable to do so and the 90-day grace period ran out on September 10.

According to a construction notice on the Cambridge Department of Public Works website, “The sculptor’s family is attempting to raised funds for restoration, but if they are not successful, the sculpture will be removed September 2013.” The MBTA did not respond to requests for comment.

Alfred Guzzetti, who chairs the department of visual and environmental studies, was a colleague of Dimitri Hadzi’s during the sculptor’s time here. Guzzetti said he understands the difficult position the MBTA faces: The organization is trying to run a major public transit system, and can’t spare half a million dollars.

But at the same time, he pointed out that the MBTA shouldn’t have waited to examine the sculpture until a chunk broke off.

“Granite sculpture isn’t eternal,” Guzzetti said. According to him, it was the responsibility of the MBTA, which commissioned and currently owns the sculpture, to conduct regular upkeep and maintenance checks, taking harsh New England winters into account—even if, as the Globe article noted, the original agreement was unclear regarding maintenance of the work.

According to Cynthia Hadzi, the MBTA wants the demolition or relocation of the statue to happen sooner rather than later, both for pedestrians’ safety and for the timely removal of the unsightly fences surrounding the sculpture.

However, the Newport News Public Art Foundation has proposed a potential alternative, offering to move the sculpture to its Virginia-based site. But the cost of dismantling and transporting “Omphalos,” would be at least $150,000—a cost the MBTA also can’t afford. And while Cynthia Hadzi told FM she would rather see the sculpture moved than destroyed, she noted, “It was made for Harvard Square.”

Guzzetti, too, stressed that Harvard Square was where Hadzi wanted the statue to remain. “People live and die,” he said, “but art and sculptures made of stone survive. This sculpture was intended to outlive us and address future generations, and it is tragic and ironic that this sculpture might be lost.”

Brewster, however, did not see the sculpture’s relocation as a bad thing. He cited Harvard’s tendency to move and rebuild the many buildings around the square, saying, “Harvard Square has an extensive legacy of a moving and shifting campus of new and old, modern and rustic.”

The controversy surrounding Omphalos has indeed brought the sculpture greater notice. As Grieder said, “It’s common to lament a loss when it’s inevitable, even if it may be impossible to appreciate [a piece] while it’s there.”

Sequeira, though new to the Harvard landscape, echoed Grieder when asked about the statue’s potential removal. “That’s the thing—you always miss something once it’s gone.”

And even with the deadline upon her, Hadzi hasn’t given up. Now that students and faculty are back at Harvard for the start of the fall semester, she hopes to raise further awareness and funds to protect her late husband’s work. “Art is special,” she said. “You don’t take it down. You fight for it.”