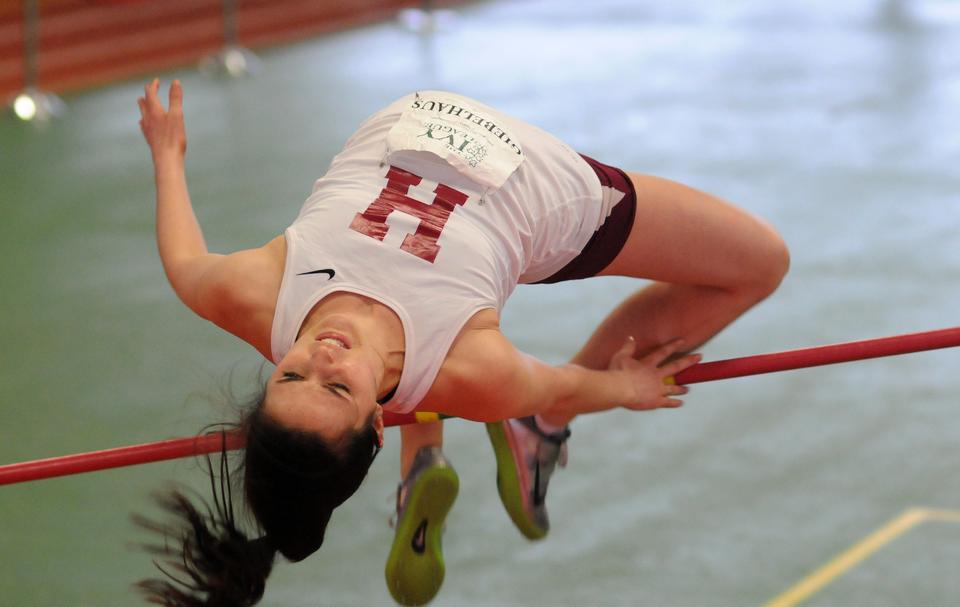 In April’s dual meet against Yale, sophomore Ann Giebelhaus was part of a Crimson sweep of the first three positions in the high jump. Giebelhaus’ leap over the 1.60-meter beam earned her second place. Classmate Mary Hirst took first place with her leap over the 1.65-meter pole.
By Dominic Martinez, Crimson Staff Writer

It’s going to take some time to make the necessary changes to the Harvard track and field record board this offseason.

Breaking a number of school records and earning its first Ivy League championship in 13 years, the Crimson’s 2013 campaign was one of the best in recent memory. At this year’s Indoor Heptagonal Championships, the Harvard women rose to the occasion and pulled off an unexpected victory over their Ancient Eight opponents, capturing Harvard’s first Heps title since 2000. The Crimson men had a similarly impressive Indoor Heps; the team’s third-place finish was the best for Harvard since 1985.

“We’re just in a really good place right now in Harvard history,” junior co-captain Adabelle Ekechukwu said. “We’re becoming a very legitimate program, which has just been shown by the success that we’ve had both individually and as a team throughout the year.”

Ekechukwu, who was honored as the Most Outstanding Performer at Indoor Heps, was dominant for the Crimson throughout the indoor season. The junior, who is also a Crimson arts and multimedia editor, broke the Ivy League record in the weight throw with a heave of 20.83 meters. Her nearest competitor at Heps, Princeton’s Julia Ratcliffe, set the Ivy record in the event at the beginning of the season but was over two full meters short of the record-breaking toss.

The junior was one of three members of the women’s squad who qualified for the NCAA Indoor Championships this season. Along with freshman multi-event athlete Martina Salander and sophomore middle distance runner Erika Veidis, Ekechukwu was recognized as an All-American for her 12th-place finish. Veidis competed in the 800-meter run and finished in 10th place with a time of 2:06.69.

“All three of them put their names on our school record board,” Harvard coach Jason Saretsky said. “All three are underclassmen and will be back again next year. For them to get a taste of competition at that level [and see] that they belong is really what our program is all about.”

The most impressive performance of the championship weekend came from Salander in the pentathlon. The rookie from Stockholm, Sweden, racked up an Ancient Eight record 4,209 points in the event en route to a fifth-place finish. She was the only freshman in the country to qualify for the pentathlon event.

“I think the trip to Arkansas was a really good experience for all three of us,” Ekechukwu said. “Even though none of us placed in the top three, I think it was definitely a stepping stone for what we’re going to try to accomplish next year. For me personally, it taught me how to compete at the highest level.”

While Salander was one of the team’s top performers during the indoor season, classmate Autumne Franklin took the helm down the stretch as competition moved outdoors. The rookie was a force in the hurdles, taking home first and second place at Outdoor Heps in the 100- and 400-meter hurdles, respectively. Senior Mary Hirst also turned in the best performance of her career at the meet, winning both the heptathlon and high jump to receive the Most Outstanding Female Field Performer distinction.

On the men’s side, the perennially strong throwing corps had success this season. Junior Dustin Brode and sophomores Ben Glauser and Igor Liokumovich chipped in a majority of the squad’s points at Outdoor Heps, where Harvard finished in fifth place. Brode finished in second place in the shot put with a mark of 18.20 meters. Brode’s performance was the then-best in school history, topping the previous record in the event set in 1969.

The trio of throwers were among 18 Harvard athletes to qualify for the NCAA Northeast Preliminaries on May 23. Brode heaved for a new personal best with a throw of 18.45 meters to land him in eighth place overall during the preliminary rounds.

“There’s just really a belief here that as a Harvard athlete you can be national-caliber, that you can be one of the best athletes in the nation,” Saretsky said. “Many of our point scorers are back again next year. There are a lot of things building, and [there is] a lot of momentum for the program.”