Men's Basketball Takes Back First Place With Win Over Columbia 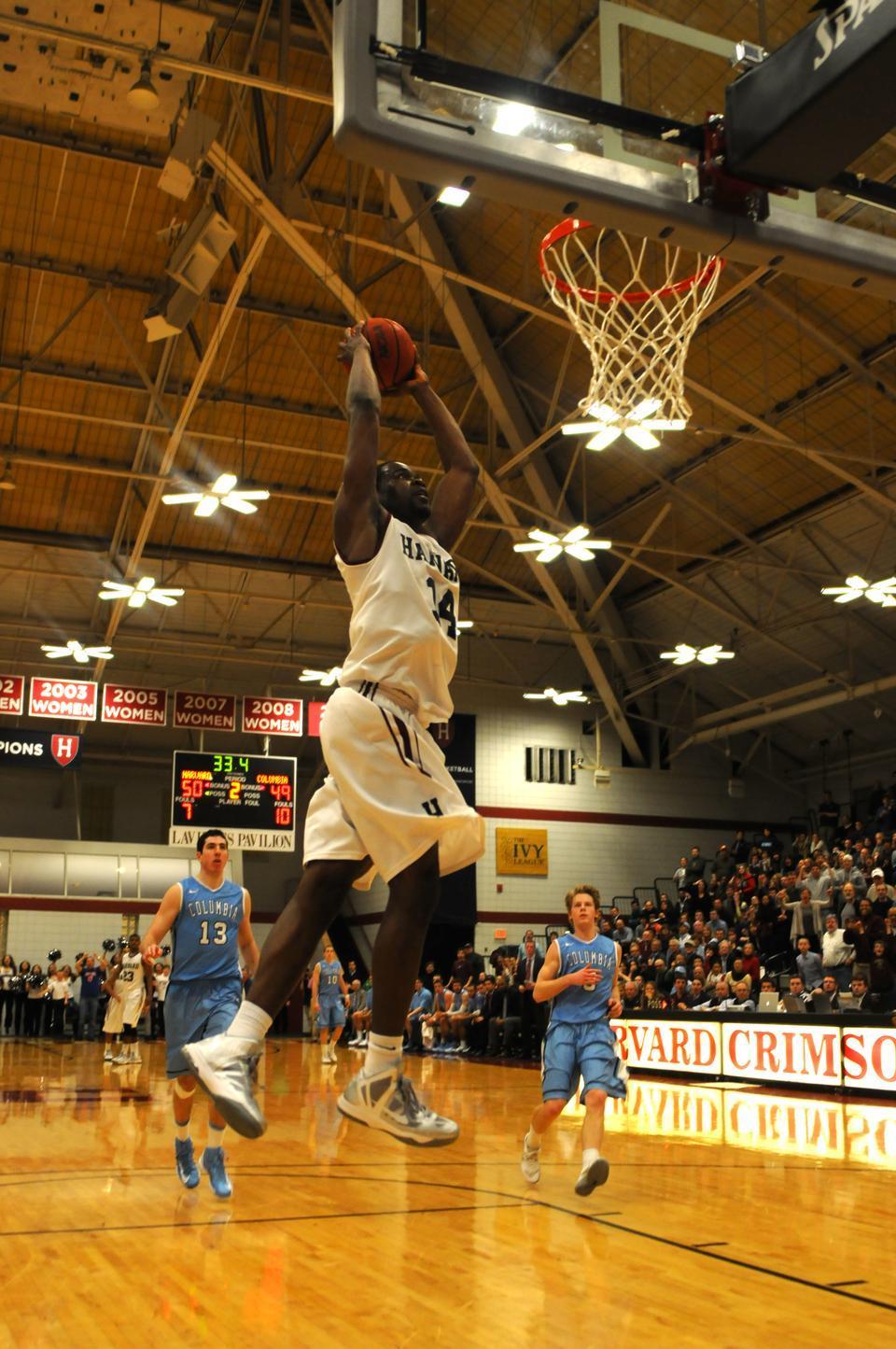 With 32 seconds left to play in Friday night’s rematch against Columbia, sophomore Steve Moundou-Missi stole the ball in the backcourt, took it the length of the floor, and hammered home an uncontested dunk. The basket pushed his team’s slim advantage to three points, and for the first time all night, Harvard was able to hold off the Lions, and hold on for the win.

Despite a late jumper from Columbia’s Grant Mullins, four Harvard free throws—two from sophomore Kenyatta Smith and one apiece from Moundou-Missi and freshman point guard Siyani Chambers—sealed the deal for the Crimson.

“It seems like another typical night in the Ivy League for us,” Harvard coach Tommy Amaker said. “[I am] obviously just really thrilled for us to gut this one out.”

Harvard eventually pulled off a 56-51 comeback victory against the Lions (12-16, 4-10 Ivy). And with that, the roller coaster that has been this season of Ivy League basketball took another dramatic turn. Harvard’s win, paired with a Princeton loss at the hands of Yale, rocketed the Crimson (19-9, 11-3) back into first place in league standings, just one half game ahead of the Tigers (16-11, 9-4) with three relevant contests still to play.

“We try to come out here not worrying about [Princeton’s] game and focusing on our game,” Saunders said. “But knowing that they did lose, that we are competing for a share of the title, is very exciting.”

Down four with 1:22 left in the game, Moundou-Missi converted two free throws after a Mark Cisco foul on the floor, ushering in an 11-2 Crimson run to close the game. After the ensuing possession, Moundou-Missi pulled down a defensive board and found Chambers, who took the ball the length of the floor and converted an and-one layup to give the Crimson a one-point advantage with 40 seconds to go. From there, it was all Harvard, as the Crimson maintained its slim advantage.

After trailing the entirety of the opening frame, Harvard came out strong in the second half, outscoring the Lions 8-0 over 1:38 near the start of the second, on a Saunders and-one, a three from Rivard, and a transition layup from Chambers. The freshman’s layup, which came off a turnover from Columbia’s Brian Barbour, knotted the game at 30 with 16:50 to play.

“You can’t say enough about Chambers,” Amaker said. “What more can he do for the team—his minutes, his effort, his moxie, his savvy, his daring.”

Harvard took its first lead over the Lions, 35-34, off of a Saunders three-pointer in the half’s seventh minute. From there, the game was back-and-forth, with neither team claiming more than a four-point lead until Harvard went ahead by five with 11 seconds to go.

Columbia bolstered its lead to four at the six-minute mark, as Mullins converted a three-point attempt.

And though the Lions threatened to stretch that lead further with two offensive rebounds—Columbia finished with 14 offensive boards to the Crimson’s five—within a minute of each other at 4:21 and 3:45, the Crimson was able to hold off the offensive onslaught after Moundou-Missi grabbed a defensive board at 3:21.

“I’m proud of our kids for putting us in a position to [win the league title on Saturday] considering the journey we have gone through this year,” Amaker said. “We talked about playing through the weekend and then picking our heads up.”

In an effective must-win game for a Harvard team that was then still hoping to find a way into the NCAA Tournament, Columbia held a 28-22 advantage over the Crimson at halftime.

The Lions jumped out to an eight-point lead thanks in large part to seven points in the first 7:34 from Alex Rosenberg. But Harvard was able to close the gap to three after a Laurent Rivard long ball with 11:39 to go and again at 5:23 on a layup from sophomore Wesley Saunders.

Columbia added to its advantage on an ensuing 7-2 run to capture an eight-point lead, finished off by a Rosenberg three with 2:41 left in the half. From there, despite an and-one from Saunders and one layup apiece from Chambers and co-captain Christian Webster, the Lions were able to close the half with a six-point advantage.

Rosenberg led all players with 12 points in the first half on four-of-five shooting, including two makes from deep, but Harvard was able to stall his momentum in the second, allowing just two more points from the forward. Chambers paced all players with a game-high 16 points. And despite its first-half offensive struggles, the Crimson was able to reclaim its spot atop the conference standings, a spot it secured after Saturday’s win over Cornell.

Smith and Moundou-Missi combined for 17 points and 16 rebounds on the night, while Smith tallied all six of Harvard’s blocks.

“It’s a great position to be in,” Saunders said. “Before, we were kind of down because we dropped both [games] last weekend, but now we just have to take care of business and do what we need to do.”