Co-Captains Leakos and Korolev Lead the Pack in Final Season 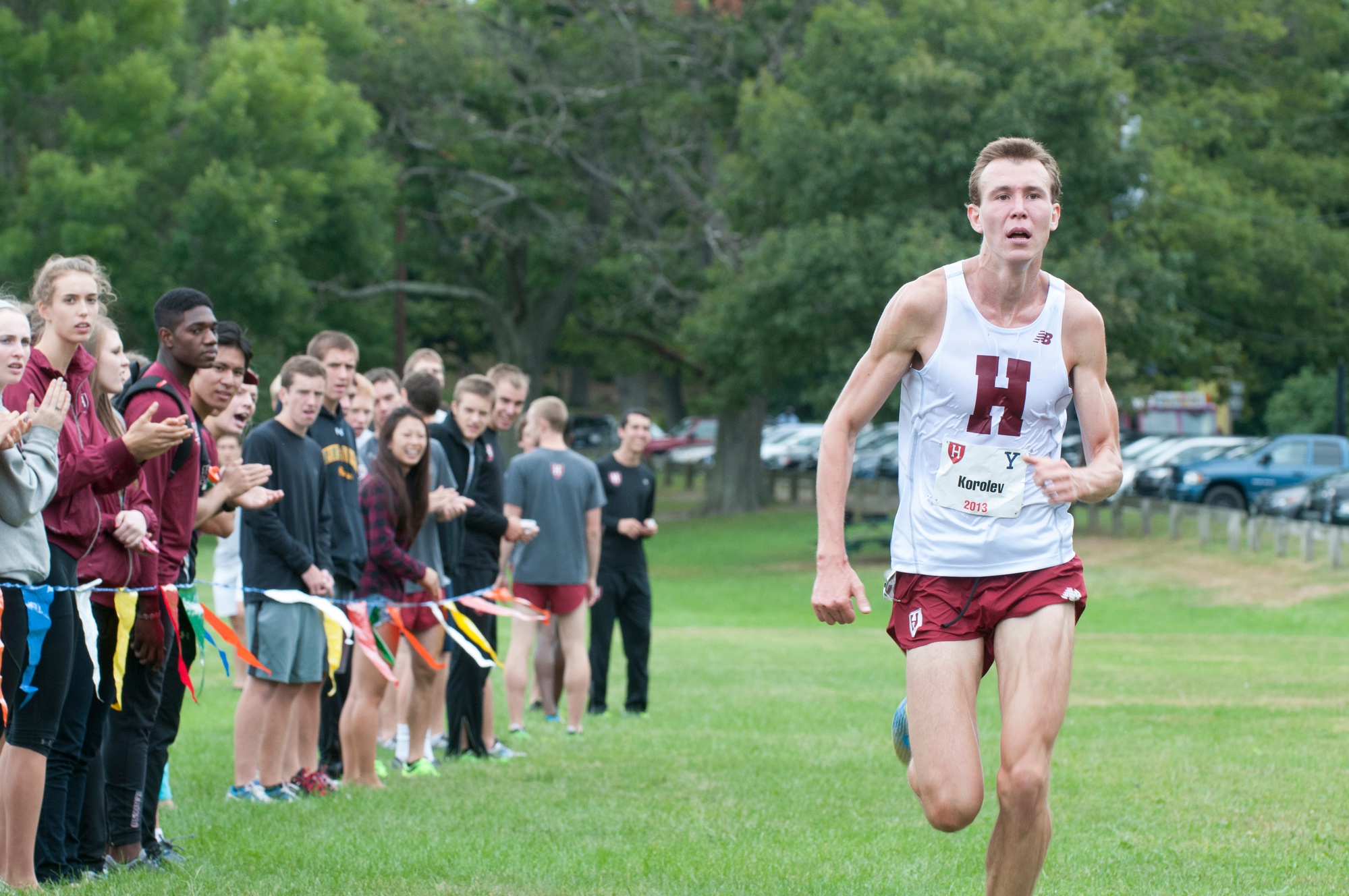 Co-captains Maksim Korolev, shown above, and James Leakos have finished either first or second in every race in which they have competed this season.
By Sylvia Marks and Dominic Martinez, Crimson Staff Writers

In the 2013 cross country season to date, Harvard co-captains James Leakos and Maksim Korolev have faced 798 runners in four races, held on four different courses in four different states. And in each of those competitions, the duo has found its place on the top of the leaderboard.

Either Leakos or Korolev have finished in first or second place in the four races in which they have participated this season.

But the co-captains’ current success is coming after a summer of hard work and the guidance of a former Harvard cross country standout. Leakos and Korolev spent the past summer in Cambridge, working with Paul Gompers, a professor at Harvard Business School whose research focuses on venture capital and start-up, high-growth companies.

According to Gompers, Leakos and Korolev got the job after they approached him for career advice last spring, looking to explore the business field in more detail.

“It was a job that was both interesting for them and flexible enough for them to get in their training, and they were great,” Gompers said. “They were both just tremendous assets to my research team over the summer.”

While Gompers was at Harvard, he set a number of school records for the Crimson cross country and track and field teams. His record in the 10k for the cross country team still stands to this day. Gompers earned fifth place at the NCAA Championships in 1986 with the current-record time of 31:02.

But despite his strong running background, he insisted that aside from “build[ing] their confidence,” he didn’t have much to do with Leakos and Korolev’s actual training.

“I had a great experience here [at Harvard], so to be a faculty member here and a role model for the students is something I find very satisfying,” Gompers said.

Though they spent the summer together, the co-captains indicated that they rarely trained together. While Korolev battled an injury, Leakos upped the intensity of his usual summer training.

“I just got my mileage to points it had never been before,” Leakos said. “I’d never been a super high mileage guy, and I turned into one this summer.”

“I actually probably had one of the worst summers of my life,” Korolev said.  “I was really, really worried [going into this season].”

Last spring, Korolev finished the outdoor track and field season with a disappointing showing in the 10k at the NCAA Championships, where he finished last with a time of 33:55.

“I got triple-lapped and I ran slower than the winning girl in the 10k,” Korolev recalled, shaking his head.

Leakos and Korolev stated that they continue to train independently during the season, aside from long runs, which they try to limit because of the extent to which they push each other.

“We’re pretty sure that one day we might have done a 2:20 marathon pace for one of our 20-mile long runs,” Korolev said.

But the disparity of training styles has not prevented either Korolev or Leakos from turning in the best season of his career.

Leakos started off the season strong with a victory at the annual Harvard-Yale meet with an 8k time of 23:32, taking the title for the second time in his career.

Leakos also won the Paul Short Invitational, which he called his “breakout race.” He ran the second-fastest time in course history with a time of 23:13, at an average mile pace of 4:41.

Korolev brought his A-game to the Wisconsin Adidas Invitational, ranking second out of 288 runners with an impressive time of 23:14, just two seconds shy of winner Kemoy Cambell of Arkansas.

Korolev continued to dominate the competition at the Heptagonal Championships on Nov. 2nd at Princeton, earning a time of 23:28, an individual title, and a conference-record in the 8k.

The co-captains’ individual successes have also helped to propel the team as a whole. At the Harvard-Yale Invitational, the Crimson defeated Yale, 15-42. The squad took fourth place out of 47 teams at the Paul Short Invitational, 13th out of 35 at Wisconsin, and fourth place at Heps.

“There are a bunch of people that are stepping up thanks to the leadership of James and Maks,” Gompers said. “I think that the men’s team, being nationally ranked, has a tremendous shot at qualifying for Nationals for the first time in over 30 years.”

Next up for the Crimson is the NCAA Northeast Regionals next Saturday. If Harvard hopes to advance to Nationals, it will need a strong performance across the board.

But at the moment, Leakos is fighting a leg injury. Inflamed tendons relegated him to the sidelines at Heps and have made it hard for him to run, forcing him to “sweat it out in the pool” as an alternative to running. He stated that, regardless of the pain, he would not sit out of Regionals and that he’s recovering.

“It’s just been miserable. But today, I was able to walk down the stairs normally,” Leakos joked.

Korolev and Leakos have set high expectations for themselves and for the team coming into the final stretch of the season.

—Staff writer Dominic A. Martinez can be reached at dominic.martinez@thecrimson.com