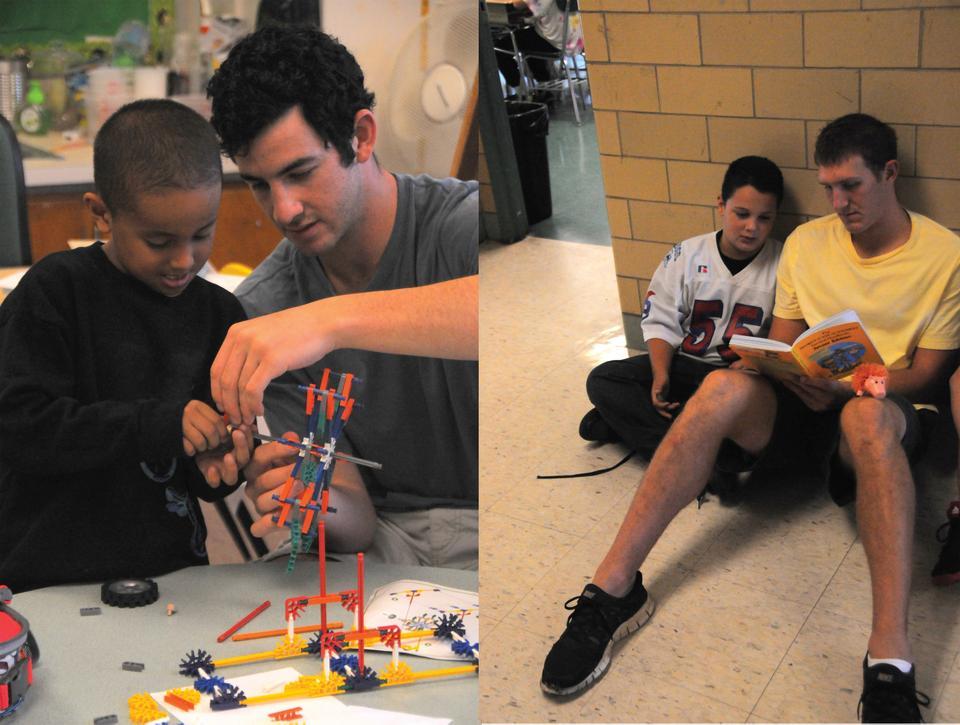 Junior Peter Kaplan (left) and senior Matt Doyle (right) are two members of the baseball team that make weekly visits to Cunniff Elementary School in Watertown to spend time with elementary students. The team has been recognized by the school’s teaching staff as positive male role models.
By Taryn I. Kurcz, Crimson Staff Writer

A swarm of kindergarteners flocks towards senior Joey Novak at Cunniff Elementary School on a sunny Friday morning. Novak—known affectionately as “Jellybeans” by many students because “his name sounds like ‘jellybeans’”—travels to Watertown, Mass. every Friday morning with fellow members of the Harvard baseball team to serve as a positive male role model for the students at Cunniff.

“The kids definitely look forward to them coming every single week, and they know exactly what time they’re coming,” said Shannon Sauder, a second grade teacher at the school. Pointing to her students, she then added, “These guys knew that the baseball guys were coming around 10-something today so they kept watching the clock and asking, ‘Is it almost time? Is it almost time?’ So they really look forward to their visit and always try to impress them when they come.”

During their weekly visits, Novak and his teammates spend a few hours interacting with kindergarten through fifth grade students in their daily activities. While Novak may be playing with the kids in physical education, senior Matt Doyle is working one-on-one with a student on how to behave in class, and junior Peter Kaplan is helping to teach team building skills through tinkering with K’Nex. Other members of the baseball team are probably working with the students on their reading or writing skills.

“[The kids] listen to them like they’re Santa Claus or something,” Sauder said. “A few weeks ago, [Kaplan] read to the whole class about tornadoes, and now they fight over who gets to have that tornado book in their book bin.”

The program between Cunniff Elementary and the Harvard baseball team began last year through the efforts of Brent Suter ’12, who wanted to get more involved with the local community, and Dr. Cindy Crimmin, Cunniff’s principal at the time. Dr. Crimmin realized that the school had no male teachers, and, as a result, many students lacked a positive male role model in their lives.

“The kids would say, ‘There are no men here,’” explained Elaine Antonellis, Cunniff’s behavior specialist and primary liaison for the program since Dr. Crimmin left.

Even if there is a father or adult male present in the household, a lot of times the kids are just looking for that extra attention from someone who they look up to and who is successful in their eyes,” added Mrs. Gallagher, a teacher for the fourth grade.

Suter and Dr. Crimmin worked out an arrangement where the Harvard baseball team would visit the classrooms every Friday morning. While the initial guidelines were only for the young men to be good role models, the program’s structure has organically become more defined over time.

“About five of us went the first week,” Doyle said. “And then we were hooked. We’ve made it bigger this year, and we’re trying to grow it even more.”

With its presence in the classrooms on a weekly basis, the Harvard baseball team has already left lasting impressions on the students at Cunniff Elementary.

“I really like when they come,” fourth grade student Giovanni Reyes said. “That’s why I like Fridays. Matt helps me makes the right decisions so I don’t get in trouble.... I don’t want him to graduate and leave.”

The teachers see a difference in the kids, as well.

"The [Harvard] guys have major impacts on the kids,” Sauder said. “The kids work harder and better when they’re here, and they work better together as a team because they try to impress them—which is good.”

As a treat to the students, the teachers and parents of the children organized a field trip to go watch a Harvard baseball game against Boston College last April.

In the week leading up to the game, the students of Cunniff Elementary put together a pep rally for their mentors, which included big banners, cheers, and Harvard pennants that they brought to the game.

“They worked really hard on them and wanted to look up all the pictures of Harvard logos and things to put on them,” Sauder said. “They brought them home, and some of them keep what they made in their lockers.”

But while the Cunniff children were being entertained at the game, the Harvard baseball team was also clearly affected by the students’ presence.

“It was awesome to see the kids there at the game,” Doyle said. “The whole experience is so rewarding and incredible. Seeing them come give you a hug every Friday when you get there—it just makes you weak.”

“It’s really neat for me to see how genuinely interested the kids are in learning and just hanging around us,” senior Jordan Haviland echoed. “We’re usually all pretty tired when we get over there in the morning, but we all leave in really good moods and are feeling pretty great about the world when we get out of there.”